Darnell Dockett To Retire As A Cardinal

1:55pm: Dockett will sign a one-day contract to retire as a Cardinal, according to Mike Jurecki of FOX Sports 910 (Twitter link).

1:30pm: Former Cardinals and 49ers defensive lineman Darnell Dockett plans to announce his retirement on Monday, sources tell Josh Weinfuss of ESPN.com. Dockett, 35, has not played in the NFL since the 2013 campaign. 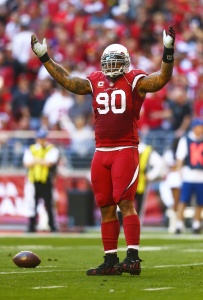 Dockett spent ten seasons in the desert, starting 156 games for Arizona as an undersized defensive tackle while posting 40.5 sacks, good for seventh on the Cardinals’ all-time list. The former third-round pick registered a career-high nine takedowns during the 2007 season, one of three years he was selected to the Pro Bowl — Dockett was also named a second-team All Pro in 2009.

Among defensive lineman who played from 2004-2013, Docket ranks ninth in Pro Football Reference’s approximate value metric. He helped lead Arizona to two playoff berths, including the 2009 postseason when the club made a postseason run to the Super Bowl only to lose to the Steelers.

In the summer of 2014, Dockett tore his ACL during training camp and was forced to miss the entire regular season. The Cardinals released him in the spring of 2015, and Dockett signed with the division rival 49ers. He didn’t make the 53-man roster, however, and was cut that September.

Vic Lombardi of CBS4 and Benjamin Allbright of AM1340 in Denver (Twitter links) have heard that the Cowboys and Broncos are discussing a potential trade involving running back Montee Ball, who has slipped down the depth chart in Denver. However, Clarence Hill of the Fort Worth Star-Telegram (Twitter link) cites a Cowboys source who says no trade talks are occurring, and Star-Telegram colleague Charean Williams tweets that Dallas would likely only be interested in Ball if he’s released.

The Cowboys have been adamant throughout the offseason that they likes their running backs, though acquiring Ball on the cheap seems more like a more realistic option for the team than signing a veteran free agent.

As we wait to see if anything materializes for the Cowboys, let’s round up some odds and ends from around the NFL…

After an offseason that saw many notable defensive players depart from San Francisco via free agency, retirement, or as a result of legal issues, another veteran defender is no longer a Niner. This time, however, it appears to have been the team’s decision. According to Pro Football Talk (via Twitter), the 49ers have released defensive lineman Darnell Dockett.

Dockett, 34, was sidelined for the entire 2014 campaign due to an ACL tear. In 2013, the former third-round pick started all 16 games for the Cards, logging 46 tackles and 4.5 sacks. However, Dockett’s cap number for 2015 was nearly $10MM, which forced the Cards to cut him earlier this year, at which point their NFC West rivals in San Francisco snatched up the three-time Pro Bowler.

In addition to recovering from that ACL tear, Dockett also battled a rib contusion during the preseason, and appears to have become expendable in San Francisco, where the Niners have Tank Carradine, Tony Jerod-Eddie and first-round draft pick Arik Armstead competing for playing time behind the starters.

A $2MM chunk of Dockett’s salary for 2015 was guaranteed, and he also earned a $500K workout bonus, to the 49ers will be on the hook for $2.5MM in dead money. However, by releasing him now, the team avoids paying him a $250K roster bonus, which he would have earned had he been on the Niners’ Week 1 roster.

With Dockett set to hit the open market again, it’ll be worth keeping an eye on the Cardinals to see if his old team is interested in a reunion.

Although the 49ers had a hectic offseason highlighted by the departure of head coach Jim Harbaugh and surprise retirements of Patrick Willis, Justin Smith, Chris Borland and Anthony Davis, newcomer Darnell Dockett is unfazed by the team’s troubles. The longtime Cardinals defensive tackle signed with the 49ers before Willis, Smith, Borland and Davis retired, but he’s confident the club will overcome an adverse offseason and find itself in the thick of what should be a highly competitive NFC West race in 2015.

“I’ve been in the division for so long, everybody’s aiming for the top teams, so I was getting a lot of criticism and people saying, `Oh, man, why’d you go to San Fran?’ and `Why’d you do this, everybody’s jumping ship? You should have went to Seattle,’ Dockett, 34, told the Associated Press.

“I’ve been playing in this league for so long, it don’t matter the players that depart the team. It’s all about the chemistry and things you build in July and August. Everybody’s got to play the game on Sunday.”

Dockett, who missed the 2014 season with a knee injury, expects to be ready for training camp next month. The three-time Pro Bowler is also excited to play for new coach Jim Tomsula.

“I’ve had the utmost respect for Jim throughout my career. After every game we met on the 50-yard line and always talked football,” Dockett said.

The best roster in football belongs to the Seahawks, according to Sam Monson of Pro Football Focus (Insider-only link via ESPN.com), who ranks Seattle No. 1 on his list all 32 NFL rosters. As Monson details, the offensive line is a weak area, with perhaps three starters who should be upgraded, but the team has several above-average offensive skill players, and one of the league’s best defenses. The Seahawks “aren’t going anywhere for a while” with the talent they have all over their roster, in Monson’s view. No other NFC West team places in the top half of PFF’s roster rankings, with the 49ers coming in 17th, the Rams 22nd, and the Cardinals 24th.

Since being released by the Eagles yesterday, Trent Cole has garnered a decent amount of free agent interest, as he was scheduled to meet with the Buccaneers today. Two more NFC teams could be interested in signing the 32-year-old edge rusher, as Matt Barrows of the Sacramento Bee reports that both the 49ers and the Seahawks have inquired about Cole. As PFR’s Luke Adams notes in the link above, Cole is viewed as a better fit for a 4-3 defense (which both Tampa Bay and Seattle utilize). San Francisco, though, fields a 3-4 look, so it presumably believes Cole is still an option at outside linebacker.

9:13am: According to Mike Jurecki of Fox Sports 910 in Arizona (via Twitter), Dockett gave the Cardinals the opportunity to match the 49ers’ offer before officially agreeing to terms with San Francisco.

8:47am: Veteran defensive lineman Darnell Dockett has made the move from one NFC West team to another, signing with the 49ers days after being released by the Cardinals. Agent Drew Rosenhaus broke the news on Twitter, and Mike Florio of Pro Football Talk has since reported (via Twitter) that Dockett’s new deal with San Francisco is a two-year pact.

Dockett, who is entering his age-34 season, was sidelined for the entire 2014 campaign due to an ACL tear. In 2013, the former third-round pick started all 16 games for the Cards, logging 46 tackles and 4.5 sacks. However, Dockett’s cap number for 2015 was nearly $10MM, which forced the club to cut him.

According to Kent Somers of the Arizona Republic, the Cards wanted Dockett back, and had a one-year offer on the table to the veteran earlier this week worth up to $4MM, with a a base value of $2.5MM. In fact, Dockett drew interest from the entire NFC West, though he didn’t visit the Rams or Seahawks. Ultimately, the Niners’ offer won out — Ian Rapoport of NFL.com, citing Rosenhaus, tweets that the two-year deal is worth $7.5MM, including $4MM in year one, with $2MM guaranteed.

For the 49ers, Dockett represents a nice addition for a defensive line that may need replenishing this offseason. The team’s two primary defensive ends in 2014, Justin Smith and Ray McDonald, may not return for the 2015 season. Smith is mulling retirement, while McDonald was cut in December due to poor off-field conduct. The Niners also pursued Ricky Jean-Francois last week before the former Colt landed in Washington.

Former Cardinals defensive lineman Darnell Dockett is expected to decide on his new team today, and his old team remains in the mix, along with the rest of that club’s division rivals. Adam Schefter of ESPN.com reports (via Twitter) that Dockett will likely decide between the Cardinals and 49ers, though the Rams and Seahawks are also interested in signing him.

Dockett, who is entering his age-34 season, was sidelined for the entire 2014 season due to an ACL tear. In 2013, the former third-round pick started all 16 games for the Cards, logging 46 tackles and 4.5 sacks. However, Dockett’s cap number for 2015 was nearly $10MM, which forced the club to cut him. According to Kent Somers of the Arizona Republic, the Cards had a one-year offer on the table to Dockett earlier this week worth up to $4MM, with a a base value of $2.5MM.

If Dockett lands with the 49ers, he’d be joining a team with a 3-4 defensive scheme similar to the one in Arizona, and would likely take over the defensive end role vacated by Ray McDonald, who was cut last season due to his off-field conduct. If the Rams or Seahawks emerge as a viable dark horse candidate and land Dockett, he’d have to make the adjustment to a 4-3 system. However, while the 33-year-old visited the 49ers this week, it doesn’t appear that he paid a visit to St. Louis or Seattle, so those clubs look like long shots at this point.

Agent Drew Rosenhaus had suggested on Monday that there was a strong market developing for his client, and that a decision was expected by week’s end.