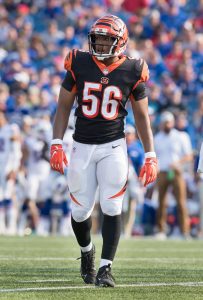 Pat Sims‘ tenure with the Bengals has come to an end. Jim Owczarski of the Cincinnati Enquirer reports (via Twitter) that the team has waived the injured defensive tackle. Sims had missed the past two weeks with a calf injury. To take his spot on the roster, the Bengals have promoted linebacker Hardy Nickerson Jr. from the practice squad. 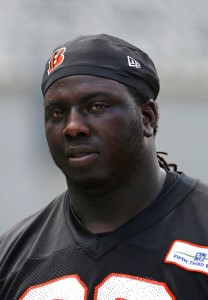 Sims, a 2008 third-round pick, spent the first five seasons of his career in Cincinnati before a brief two-year stint with the Raiders. He rejoined the Bengals prior to the 2015 season, with the team valuing his ability to defend against the run. He signed another two-year contract with the organization prior to the 2016 season, and he proceeded to play in all 16 games that season. Sims had appeared in eight games (seven starts) for the Bengals in 2017, compiling 19 tackles. However, Pro Football Focus has been critical of his play this season, ranking him 107th among 112 interior defender candidates. With the veteran now out of the picture, the Bengals will turn to Ryan Glasgow, Andrew Billings, or Josh Tupou to start alongside Geno Atkins.

The son of former Pro Bowler Hardy Nickerson, Nickerson Jr. joined the NFL as an undrafted free agent out of Illinois. The 23-year-old has split the 2017 season between the active roster and the practice squad, compiling a pair of tackles in seven games. He’ll join Carl Lawson, Jordan Evans, and Vincent Rey as the team’s reserve linebackers.