Of the three high-end quarterback prospects expected to be available to the 49ers at No. 3 overall, Justin Fields has lagged behind the other two — Trey Lance and Mac Jones — in terms of being linked to San Francisco. But Kyle Shanahan has reached out to Fields’ pre-draft coach, former NFL QB John Beck, at points this offseason. Beck has overseen Fields’ pre-draft preparations and has taken over that role for Lance in recent weeks. Beck was with Washington when Shanahan served as the team’s OC.

“Knowing that I’ve been around (Fields) the last three months, he’ll reach out and just want to ask questions or talk,” Beck said, via The Athletic’s Matt Barrows (subscription required) of Shanahan. “And kind of like prod into: What are the things we’re working on, the things that I think having played in his system, having been coached by him, I know how he’s going to coach quarterbacks. I know what he’s looking for.”

That didn’t take long. One day after visiting the Cardinals, running back James Conner agreed to join Kyler Murray & Co. in Arizona (Twitter link via Jay Glazer of FOX Sports). The Cardinals have since confirmed the deal, making the one-year pact official. 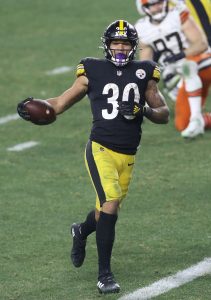 Earlier today, we learned that Conner recently underwent surgery to fix a turf toe-type injury. That could help to explain why he was still on the board in mid-April. Fortunately, the injury wasn’t all that serious and Conner is expected to be fully cleared by June.

Conner made his mark in 2018, after emerging from Le’Veon Bell‘s shadow. That year, he rushed for 973 yards on the ground with 12 touchdowns, plus 55 catches for 497 yards. Then, in 2019, he was limited to just 464 yards on the ground and six games, thanks in part to knee and shoulder trouble.

The Steelers didn’t show much interest in a reunion, even though Conner always said that he wanted to stay in Pittsburgh for the long haul. Now, he’ll have an opportunity to play in warmer weather as he joins Chase Edmonds, Eno Benjamin, Jonathan Ward, and Khalfani Muhammad in the Cardinals’ running back group. With Conner towards the top, the Cardinals hope to replace the production of Kenyan Drake, who left in free agency to join the Raiders.

Running back James Conner underwent surgery this offseason to address a turf toe-type injury (Twitter link via NFL.com’s Ian Rapoport). This would help to explain his prolonged and ongoing stint in free agency. 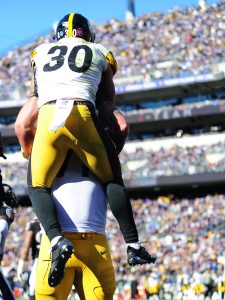 The good news is that Conner’s injury was “very moderate,” according to sources who spoke with Rapoport. Apparently, this took place off of the field while Conner was “riding in a recreational vehicle.” He’s expected to be at 100% health by June, so he should be good to go in advance of training camp.

The Cardinals recently met with the Steelers free agent, a sign that his market is picking up. He’s coming off of a quietly productive year that ended with 721 yards on the ground and six scores, plus 35 grabs for 215 yards. If not for a positive COVID-19 test that cost him some time down the stretch, Conner might have cracked 1,000 yards.

Conner’s best work came in 2018, when he ran for 973 yards and 12 touchdowns with a 4.5 yards per tote average. He was still pretty efficient this past year though, posting a 4.3 ypc.

The Cardinals will meet with James Conner today, as Jay Glazer of FOX Sports tweets. This marks Conner’s first known visit of the offseason. 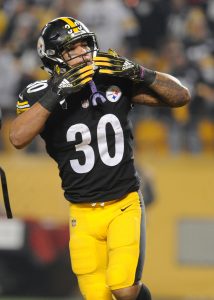 Conner made his mark in 2018, after emerging from Le’Veon Bell‘s shadow. That year, he rushed for 973 yards on the ground with 12 touchdowns, plus 55 catches for 497 yards. Then, in 2019, he was limited to just 464 yards on the ground and six games, thanks in part to knee and shoulder trouble.

This past year, he was on pace for a 1,000-yard season up until he tested positive for COVID-19 in November. It was a scary situation for the cancer survivor, but, fortunately, he was okay. Ultimately, he finished 2020 with 721 yards on the ground and six scores, plus 35 grabs for 215 yards. The Steelers haven’t shown a ton of interest in re-signing Conner and he remains available for the league’s other 31 teams.

“My goal is to win,” Conner said last year when asked about the possibility of a Pittsburgh extension. “I have the opportunity to do that. The special team we got, pieces that were out last year coming back healthy. I’m not playing for a contract or playing not to get hurt. I’m playing to win, that’s what it’s about, to be part of Super Bowl No. 7 for the organization.”

With the Cardinals, he could help replace the production of Kenyan Drake, who has since left to join up with the Raiders. Currently, the Cardinals have Chase Edmonds, Eno Benjamin, Jonathan Ward, and Khalfani Muhammad on the RB depth chart.

No notable extension talks between the Steelers and James Conner transpired ahead of his contract year, which doubled as a brutally ineffective season for Pittsburgh’s ground game. The team is not expected to re-sign Conner, Brooke Pryor of ESPN.com notes. Considering the Pittsburgh native’s history of nagging injuries and the Steelers’ salary cap issues, this should not be especially surprising. Conner has played well in spurts, initially starting the Steelers’ post-Le’Veon Bell era so strong he made the Pro Bowl as an original invitee. However, an injury slowed Conner late in that 2018 season. He battled maladies in 2019 and ’20 as well; the cancer survivor also contracted COVID-19 last year. This will create a clear need at running back in Pittsburgh, even with the likes of Benny Snell and Anthony McFarland still under contract.

Conner may need to accept a one-year deal in order to re-establish his value, perhaps putting him in the same boat as fellow 2017 draftee Marlon Mack. These two will join Chris Carson and Kenyan Drake, barring extensions commencing before March 17, in free agency. The Packers have four days to use their franchise tag on Aaron Jones.

Despite skyrocketing COVID-19 numbers nationwide, the NFL’s stance remains that postseason games will occur at team venues. Although no final decision has surfaced, NFL chief medical officer Dr. Allen Sills and union president J.C. Tretter providing anti-bubble statements provides a good indication no one- or two-site postseason will commence. This pours cold water on an in-case-of-emergency bubble scenario the league was considering last month. But no real bubble momentum has emerged since the pandemic began.

“There’s not magic about a bubble. In fact, there’s the same challenges within a bubble. Let’s be clear: COVID-19 does not fear a bubble,” Tretter said. “The vulnerability inside a bubble is the same, which is full compliance of protocol at all times. We believe that it’s all about compliance, and compliance with the things that we know avoid risk is important, whether you’re all together in an isolated environment, or whether you’re in your community.

The NBA’s Orlando bubble produced zero positive COVID tests for several weeks, however, and Major League Baseball’s multi-site bubble setup did not produce a positive case until the Justin Turner saga in Game 6 of the World Series. While the NFL has bulked up its coronavirus protocols as the season has progressed, the league going without a postseason bubble stands to bring greater chances star players miss playoff games — especially with the coronavirus environment having changed since the NBA and MLB postseasons.

Here is the latest from the virus front:

Should the NFL leave the Ravens-Steelers rematch at 7pm CT Tuesday — its third time slot — the Steelers will not have James Conner for the game. Conner tested positive for COVID-19 on Saturday, Aditi Kinkhabwala of NFL.com reports (on Twitter).

In addition to the fourth-year running back testing positive, Steelers special teams coordinator Danny Smith also submitted a positive coronavirus test, Gerry Dulac of the Pittsburgh Post-Gazette tweets. This, of course, follows the COVID-19 outbreak at the Ravens facility. The game remains on schedule for Tuesday night.

A 2018 Pro Bowler who has played a key role in the Steelers’ first-ever 10-0 start, Conner is a cancer survivor. As of Saturday afternoon, he is not experiencing significant symptoms, Brooke Pryor of ESPN.com notes. This positive test stands to keep Conner out of the Steelers’ Week 13 game — against Washington — as well. Conner, 25, was diagnosed with stage 2 Hodgkin’s lymphoma in 2015. Smith has been the Steelers’ ST coordinator since 2013.

The Steelers are working on a contact-tracing effort, so more players and coaches figure to join Conner and Smith in being unavailable against the Ravens. Pittsburgh placed Stephon Tuitt and two other linemen on its virus list Friday. The Ravens have 15 players on their virus list.

Considering the alternatives to playing this game on Tuesday, the NFL will face a major decision over the next few days. The league has pushed this game back to what looks like its Week 12 fail-safe point. A makeup Week 18 window is believed to be the league’s Plan B, with Plan C being the 16-team playoff bracket that would stem from canceled regular-season games.

On pace for his second 1,000-yard season since taking the reins from Le’Veon Bell in 2018, Conner has totaled 645 rushing yards and five touchdowns this year. Benny Snell‘s 57 carries are second-most on the Steelers. His 3.4 yards-per-carry average is a yard worse than Conner’s.

Prior to signing a six-year, $54MM deal with the Redskins prior to the 2009 campaign, three-time Pro Bowl cornerback DeAngelo Hall had the opportunity to join the Patriots. The defensive back ultimately opted for the more lucrative deal, a decision he’s now regretting.

“When I signed to play half the season with Washington in 2008, there was a line in my contract that said the team could not franchise tag me that next season. I remember negotiations for a new deal with Washington weren’t going well, and there were other teams in the picture, including New England,” Hall said (via NFL.com). “At that time, players didn’t take short-term deals, but Randy Moss had just signed a three-year, $27 million deal with the Patriots. I couldn’t believe it.

“In my own contract discussions with the Pats, I recall Bill Belichick telling me they couldn’t give me the contract Moss signed. Being a young and greedy knucklehead, I chose to stay in Washington on a long-term deal, which ultimately had me making the same per-year salary as Moss. Over a few million, I could’ve changed my legacy by being part of that dynasty. That was on the table for me, and I wish I would’ve made the decision to take less money and play for Belichick.”

Hall ended up sticking with the Redskins through the 2017 season. The Redskins ultimately won 56 games between the 2009 and 2017 seasons, earning a pair of playoff appearances. The Patriots won 112 games and made four Super Bowls during that same span.