Offensive lineman Jedrick Wills has inked his rookie contract. Mary Kay Cabot of Cleveland.com reports that the 10th-overall pick in the 2020 draft has signed his four-year rookie deal with the Browns. 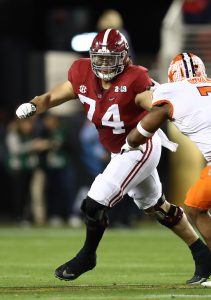 Per the terms of his slot, Wills signed a four-year deal worth $19.7MM. The deal is fully guaranteed and includes an $11.89MM signing bonus. Cabot notes that the rookie flew to Cleveland on Tuesday to sign his contract.

The 6-foot-4, 312-pound lineman spent three seasons at Alabama. This included a 2019 campaign where he protected Tua Tagovailoa‘s blind spot en route to a second-team All-American nod and first-team All-SEC honors. In 29 starts at Alabama, Wills only allowed a single sack.

As Cabot writes, Wills has been working virtually with offensive line coach Bill Callahan and former Browns left tackle Joe Thomas. Despite the unconventional offseason, Callahan has made it clear that he won’t have any reservations about starting the rookie at left tackle in front of Baker Mayfield.

With the signing, the Browns have now signed five of their seven draft picks, via PFR’s 2020 NFL Draft Tracker: 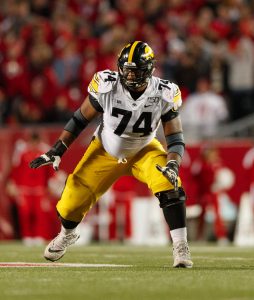 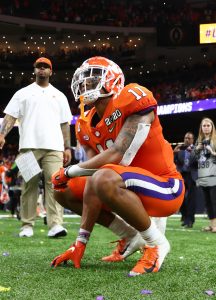 It’s no secret that the Jets could use some help at wide receiver. And, with the No. 11 pick, they could have the opportunity to take CeeDee Lamb or Jerry Jeudy, who stand as the cream of a rich WR crop. Meanwhile, they also need to protect quarterback Sam Darnold (and his spleen), so they could opt for offensive line help in the first round. As Tom Pelissero of NFL.com tweets, the Jets have done their homework on this year’s top big men. 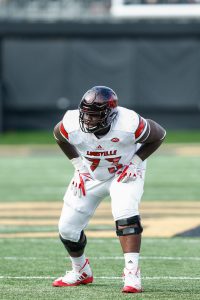 Before the travel restrictions, the Jets had dinner and a private workout with Georgia’s Andrew Thomas and Alabama’s Jedrick Wills, per Pelissero. He also hears that they’ve hosted Louisville’s Mekhi Becton on a top 30 visit and Zoom-chatted with Iowa’s Tristan Wirfs. They’re the four best offensive lineman in this year’s class, so there’s no guarantee that any of them will slip to Gang Green. Thomas has also garnered interest from the Dolphins (No. 5), Pelissero hears.

Of that quintet, Wirfs is widely viewed as the most NFL-ready. He also offers serious athleticism for his size (6’5″, 320 pounds), plus versatility. At Iowa, he played primarily at left and right tackle. Pro scouts also believe that he has the ability to move inside and play guard.

The top 10 already has teams in need of line help and other teams are contemplating trades to land one of this year’s best OLs. The Bucs and Broncos have serious interest in moving up the board and they could leapfrog the Jets on Thursday.

One of the many high-end wide receiver prospects in this draft, Colorado product Laviska Shenault will need surgery. Shenault will undergo a procedure that will sideline him for more than a month, Adam Schefter of ESPN.com tweets. The surgery is scheduled for next week, per Troy Renck of Denver7 (on Twitter). Shenault did not run well in this week’s 40-yard dash, clocking 4.58 seconds, and this injury helps explain that. The early-entry wideout is dealing with a core muscle injury and pubic bone inflammation, per Schefter. Shenault did not run a second 40. This could impact Shenault’s draft stock, but even given his injury history and the abundance of wide receivers in this class, it is unlikely he will fall out of the second round. The 6-foot-1, 227-pound wideout has been on the draft radar for a while, beginning with a 1,011-yard, nine-touchdown 2018 sophomore season.

The 2020 NFL Draft just added another top prospect to the player pool. Alabama offensive tackle Jedrick Wills will leave school early and enter the draft, he announced on Twitter.

Wills is widely regarded as one of the best offensive linemen in the country, and as things stand right now is almost certain to be a first-round pick. Many analysts think he has a shot to go in the top ten, and Matt Miller of Bleacher Report had him at 15th overall in his most recent mock draft. Miller writes that he is “tailor-made to step in from Day 1” and “has the movement ability with an easy, poised kick-step to play either right or left tackle in the pros.”

Highly recruited out of high school, Wills became a full-time starter as a sophomore in 2018. Alabama’s other starting tackle and potential first-round pick Alex Leatherwood recently announced his intention to return to school. Like seemingly every year there are a bunch of teams picking early in need of tackle help, and the Browns could be a natural fit with the tenth overall pick.