The Cowboys will have one of their top cornerbacks in uniform Sunday against the Giants. They are activating slot corner Anthony Brown from IR.

Brown has missed the past three games, joining Chidobe Awuzie in that regard. Dallas, however, will be without its starting center for a while. Dealing with an MCL malady he suffered on the first play of the Cowboys’ Week 4 game against the Browns, Joe Looney is now on Dallas’ injured reserve list.

Dallas re-signed Brown this offseason, bringing back the fifth-year veteran after allowing Byron Jones to leave in free agency. Brown played all 73 of the Cowboys’ defensive snaps in Week 1, but a rib injury sidelined him for the team’s past three games.

The Cowboys made Brown part of their standout 2016 draft class, adding him in Round 6. He has played 57 games with the team since. No. 58 will come Sunday against the Giants, helping the NFL’s last-ranked scoring defense. Awuzie, however, remains on the Cowboys’ IR.

Looney must miss at least three games. While he is not expected to miss the rest of the season like starting tackles Tyron Smith (now on IR as well) and La’el Collins, this is an obvious setback for an injury-riddled Dallas offensive line. The Cowboys will turn to rookie Tyler Biadasz as their starting center Sunday.

It’s been a bad year for injuries, and unfortunately we’ve already heard reports of significant ones to guys like O.J. Howard and Austin Ekeler this Sunday. Here’s the latest batch of updates as Week 4 winds down:

Interior offensive lineman Joe Looney has agreed to a deal to stay with the Cowboys for at least one more season, according to Mike Garafolo of the NFL Network. With a new coaching staff in Dallas and Looney’s former head coach now with the Giants it was unclear whether Looney would remain with the team, but it appears, at least for now, that the team is happy with a reunion.

An eight-year veteran, Looney has been a solid rotational lineman with the flexibility to play anywhere on a line’s interior. In 2018, Looney started every Cowboys game at center, but otherwise, he has never started more than 6 games in a season.

Looney spent the first three years of his pro career in San Francisco before the 49ers waived him prior to the 2015 season. After a one year stint with the Titans, Looney joined America’s Team in 2016 and has appeared in every Cowboys game since.

Travis Frederick‘s become one of this generation’s best centers, but he’s encountered a rare obstacle in the form of an auto-immune disease. The All-Pro Cowboys blocker revealed the diagnosis on Wednesday and is out indefinitely. 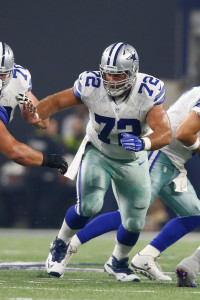 The Cowboys are pleased Frederick finally received a diagnosis for what’s been bothering him this month, Guillain-Barre disease, and Clarence Hill of the Fort Worth Star-Telegram reports the team is optimistic this is not a season- or career-ending setback.

“We were really so happy when it was diagnosed that this was the problem,” Jerry Jones said, via Hill. “He and we were concerned about that when we couldn’t get a diagnosis. The biggest thing we have been worried is his health, his long-term health, his individual well being as opposed to how it impacted us as a team or impacts him as a player but his well being is the most important thing.

“As it relates to football, I don’t have any definitive thing to talk about there.”

Frederick has begun taking medicine for this condition already, but he has no timetable for a return. A previous diagnosis revealed Frederick didn’t have Guillain-Barre, the sixth-year lineman merely needing rest. But once symptoms — centered around neck stingers — persisted and the accurate diagnosis emerged, per Hill.

Joe Looney has stepped in for Frederick at center. Looney’s in his third season with the Cowboys and has previously served as an interior-line backup. The Cowboys rely on their three-pronged force of 27-year-old linemen — Frederick, Zack Martin and Tyron Smith — but for the time being, Looney, also 27, will have to play with the starters. Looney made three starts last season and played in all 16 Dallas games. Hill adds Martin is an emergency option at center.

The Cowboys have officially re-signed offensive lineman Joe Looney to a two-year deal, the club announced today. David Moore of the Dallas Morning News reported Sunday that Dallas was close to a new deal with Looney.

Looney is just one of three offensive linemen who are scheduled to sign with the Cowboys this week. Dallas has announced its addition of former Patriots tackle Cameron Fleming, while interior lineman Marcus Martin is also expected to land with the Cowboys. Looney, like Martin, looks like a clear backup, while Fleming could the opportunity to start at right tackle if Dallas opts to move La’el Collins to guard.

After stints with the 49ers and Titans, Looney has found a home as a reserve lineman the last two seasons in Dallas. He has appeared in all 32 games since 2016, starting three, and play both guard positions and center. The 27-year-old Looney is also used in the team’s jumbo formation as a sixth offensive lineman.