The Chiefs are making a change at the safety position. As Ian Rapoport of NFL.com writes, Kansas City is relegating Daniel Sorensen, who has started every game since Week 6 of last year (save for a meaningless Week 17 contest) to a reserve role. 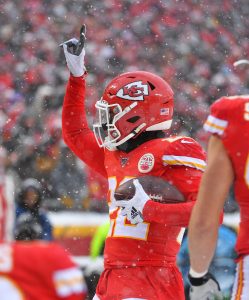 Juan Thornhill will get the start alongside strong safety Tyrann Mathieu in Sorensen’s stead. Thornhill, a 2019 second-rounder, started every game of his rookie campaign, intercepting three passes and generally playing like a high-level defender. However, he suffered a torn ACL in the last game of the 2019 season, and though he played in all 16 contests last year (eight starts), he still struggled with his knee pain and could not replicate his earlier level of performance.

Sorensen, re-signed to a one-year, $2.4MM contract this offseason, has struggled mightily in 2021. He has been repeatedly beaten in coverage, is yielding a 153.8 passer rating when targeted by opposing QBs, and has also missed nine tackles. Pro Football Focus’ advanced metrics, which weren’t particularly high on him in 2020 either, view him as the third-worst safety in the league among players with over 100 snaps.

The Chiefs have gotten off to a 2-3 start, and their porous defense has been the primary reason for that. KC currently ranks as the second-worst defense in terms of yards allowed, and while the Sorensen-Thornhill swap won’t be a cure-all, it is certainly a logical move to make.

Thornhill has played in just 142 snaps this year (compared to Sorensen’s 325), but he has been decidedly more effective in his limited action. Per PFF, the Virginia product ranks as a top-30 safety, which includes an above-average coverage mark. A return to his 2019 form could position him well for a possible extension in 2022.

The Chiefs had a big Sunday, picking up a first-round bye in the playoffs thanks to their win over the Chargers and the Dolphins’ upset of the Patriots. Unfortunately they didn’t escape Week 17 unscathed, as starting safety Juan Thornhill went down with a knee injury that was later revealed to be a torn ACL, per Adam Teicher of ESPN.com (Twitter link).

Needless to say, the injury will keep Thornhill out of the playoffs. The Chiefs drafted Thornhill in the second round back in April, and he started all 16 regular season games for them. The rookie was a huge part of the defense, playing an every-snap role. Kansas City’s pass defense has quietly been playing really well this season, and Thornhill had formed a great safety duo with veteran Tyrann Mathieu.

Thornhill will finish his first season as a pro with 59 tackles and three interceptions. It’s a big blow as the Chiefs gear up for their playoff run. The Virginia product’s absence will leave a huge hole in a defense that had been peaking recently.