Recently, Lane Kiffin was identified as a potential candidate for NFL offensive coordinator jobs in the offseason. It turns out that he will not be available for interested teams. Kiffin has signed on as Florida Atlantic University’s new head coach, according to Brett McMurphy and Chris Low of ESPN (on Twitter). 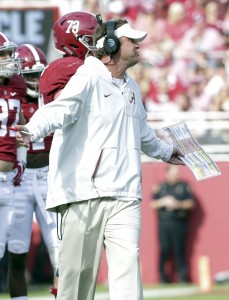 Kiffin, who has reestablished himself as an offensive guru after some terrific work with Alabama, was rumored to be the new head coach at Houston. However, UH went in a different direction and hired Major Applewhite. Kiffin conceivably could have stepped back into the professional ranks, but for now he’ll stick with college ball.

As the head coach of the Raiders, Kiffin went 5-15 before he was fired midway through the 2008 season. Still just 41, Kiffin may look to return to the NFL someday for redemption. For now, he’ll try and reignite FAU after a disappointing 3-9 season.

Will Lane Kiffin return to the NFL in 2017? After successfully guiding Alabama’s offense, pro teams are taking notice of him and he could be an offensive coordinator candidate, Albert Breer of The MMQB writes.

“I think he’d instantly upgrade an NFL offense, he’s arguably one of the best offensive minds in the game,” said one area scout assigned to the Tide. “He’s able to adapt in terms of personnel. The offense this year is completely different in style and play-calling than it was last year with [Derrick] Henry.”

Kiffin first made a name for himself as USC’s bold offensive coordinator. In 2007, the Raiders hired the 31-year-old Kiffin to be their head coach, making him the youngest man to hold that job in the NFL since 1946. Unfortunately, Kiffin went 5-15 with the Raiders and his Oakland sojourn ended with an acrimonious split.

Years later, however, Kiffin has restored his reputation as an offensive guru. Alabama is 12-0 and in the hunt for yet another national title despite leaning on true freshman quarterback Jalen Hurts. Kiffin has been widely connected to LSU, but Breer says he is expected to get NFL calls if he is not hired quickly by the Tigers.

The Rams’ biggest needs are at quarterback and along the offensive line, but after that the team could look to add depth at linebacker and corner, writes Nick Wagoner of ESPN.com. Especially at cornerback, he notes that the need does not seem pressing, but with both Janoris Jenkins and Trumaine Johnson reaching free agency in 2015, the team could use some young corners behind them.

More about the AFC and NFC West:

There’s been plenty of turnover among the offensive coordinator ranks around the NFL already this offseason, with about a third of the league’s franchies hiring new OCs so far — 10 teams have hired replacements for their old coordinators, while the Cowboys are technically the 11th to install a new OC, having given Scott Linehan the official title that Bill Callahan previously held.

As our coordinator search tracker shows, even after those 11 teams have made changes, there are still three clubs with vacancies at the position, though it’s possible only two of those clubs will actually make a hire. Here’s the latest on the three teams still without an offensive coordinator:

The Niners have already added one notable name to their offensive staff, hiring ex-Raiders interim coach Tony Sparano as their tight ends coach, but are still in need of a coordinator to oversee the offense. The club pursued former Broncos OC Adam Gase before he landed with the Bears, which leaves three candidates who have been linked to the club since the hiring of head coach Jim Tomsula: Mike Shanahan, Lane Kiffin, and Rob Chudzinski.

Shanahan’s name came up about a week ago, but he hasn’t received much buzz since then, and it looks to me as if Kiffin and Chudzinski are the favorites for the position. In fact, ESPN’s Adam Schefter reported over the weekend that Kiffin appeared to be the frontrunner. Since then, the Colts have rebuffed San Francisco’s attempt to speak to Chudzinski, which would seem to further solidify Kiffin as a top option, but we shouldn’t rule out the Colts assistant quite yet. Alex Marvez of Fox Sports reports (via Twitter) that Chudzinski’s contract with Indianapolis expires on Monday, at which point he’s expected to interview with the 49ers and Rams.

As noted above, the Rams are expected to interview Colts assistant Rob Chudzinski when his contract with Indianapolis expires on Monday, and the fact that both San Francisco and St. Louis are willing to wait on Chudzinski suggests he’s a viable candidate for both clubs. Like the 49ers, the Rams had interest in Adam Gase and have been declined permission to speak to Chudzinski until now — St. Louis was also turned away when the team attempted to speak to Packers assistant Alex Van Pelt, and has seen a number of potential targets, including Greg Roman and Kyle Shanahan, land jobs with other clubs.

Still, the Rams did interview a candidate this week, in former Bills OC Nathaniel Hackett. Perhaps at this point Hackett is a top target by default, but a Thursday report indicated that the team may be comfortable promoting an in-house coach into the OC role. Tight ends coach Rob Boras and quarterbacks coach Frank Cignetti are viewed as strong candidates who are already on the staff, per Jim Thomas of the St. Louis Post-Dispatch, who adds that Boras would probably get the nod over Cignetti if the Rams stay in house.

The Texans didn’t have an offensive coordinator on staff in 2014, with head coach Bill O’Brien serving as the de facto OC. Jason La Canfora of CBSSports.com reported earlier in the week that Houston could add an OC to the staff for 2015, but there has been no news on that front since La Canfora addressed the topic. The CBSSports.com scribe noted that Doug Marrone would be a strong candidate for such a position, so the fact that Marrone ultimately accepted a non-OC job in Jacksonville suggests the Texans may not be hiring an OC after all. Nonetheless, it’s a situation worth monitoring.

Let’s take a look at a few notes regarding various coordinator vacancies:

New Giants defensive coordinator Steve Spagnuolo has a huge task ahead of him, writes Ralph Vacchiano of the New York Daily News. While Vacchiano believes that head coach Tom Coughlin made a great decision going into his past to hire his best defensive coordinator. The tough part is that Spagnuolo will have to match his past success without stars such as Michael Strahan, Justin Tuck, and Osi Umenyiora.

In a 35-page document filed Friday, the NFL asked a federal court to throw out the NFLPA’s petition to have Vikings running back Adrian Peterson‘s suspension overturned, writes Dave Campbell of the Associated Press. Citing labor law, the league argues that there is no reason to “re-litigate all of the decisions” made by arbitrator Harold Henderson on December 12. The trial is scheduled for February 6, while Peterson is currently suspended through at least April 15. Let’s look at some more notes from around the NFL…