Ted Karras is returning to the Patriots, as Jeff Howe of The Athletic tweets. Once finalized, it’ll be a one-year, $4MM deal for the veteran center, according to NFL.com’s Tom Pelissero (on Twitter).

Karras joined the Dolphins for the 2020 season. He started in all 16 games and played on all 1,067 of their offensive snaps. Before that, he spent the previous four years with the Patriots, winning a pair of Super Bowls in front of Tom Brady. Karras was a reserve for the early part of his New England tenure, starting only five games through his first three pro seasons. Then, in 2019, he was elevated to the first string for 15 games.

The return of Karras likely signals the departure of free agent David Andrews. The longtime starter missed the entire 2019 campaign after getting diagnosed with a pulmonary embolism, but managed to return in time for the 2020 season. Held back by a much less serious thumb ailment, he appeared in 72% of the Patriots’ offensive snaps in 12 games. Now, he could be moving on to another club.

Besides Ryan Fitzpatrick, the Dolphins really don’t have any big-name impending free agents. However, the organization is still focused on retaining at least a couple of those players. Barry Jackson of the Miami Herald writes that the Dolphins are interested in re-signing center Ted Karras and defensive tackle Davon Godchaux. 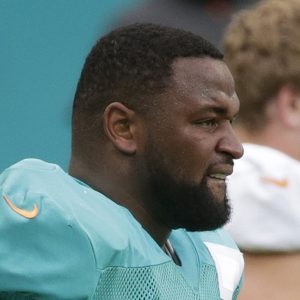 According to Jackson, the Dolphins have told Karras that they want him back next season. The offensive lineman joined the Dolphins last offseason, and he proceeded to start all 16 games for Miami, playing on all 1,067 of their offensive snaps. The 27-year-old had spent the previous four years with the Patriots, winning a pair of Super Bowls. After starting only five games through his first three seasons in the NFL, Karras started 15 games for New England in 2019.

Godchaux was limited to only five games in 2020 thanks to a biceps injury, but the former fifth-rounder started all 32 games for Miami between the 2018 and 2019 seasons. Jackson notes that the organization would like to retain the 26-year-old, but financials could complicate the negotiations. Jackson passed along a quote from agent Drew Rosenhaus, who acknowledged that the Dolphins may not be able to afford his client after they “invested” in the likes of Christian Wilkins, Raekwon Davis, and Zach Sieler.

“Davon is one of the most talented defensive tackles, I believe, and the Dolphins would have to be able to compensate him in that capacity,” Rosenhaus said (via Jackson). “I’m not sure that they will, given the talent they have on the team. We’ll see if the Dolphins are able to step up and be competitive with other teams that may not have as much talent at the defensive tackle position.”

The Dolphins have landed the Patriots’ starting center. Ted Karras will come to the Dolphins on a one-year, $4MM deal, as Barry Jackson of the Miami Herald tweets.

The offensive line has been a major area of need for the Dolphins this offseason and they’ve moved to address it in recent days. Earlier this week, they inked Ereck Flowers to a three-year deal worth $30MM, including $19.5MM fully guaranteed – a pact reflective of the league’s dearth of quality linemen. Next, the Dolphins will have to figure out their left tackle situation and Jackson hears they’re likely to find their man in the draft.

The Patriots are hoping to have David Andrews retake his spot in the middle of the line, but that will all depend on his health. Andrews missed all of 2019 with blood clots in his lungs and has expressed optimism about being about to play in 2020.

Dolphins Checked In On Ted Karras

As the Dolphins begin deploying their war chest of assets and cap space to upgrade a roster dearth of talent, the team appears to be eyeing options along the interior offensive line. According to Barry Jackson of the Miami Herald, Miami has checked in with free-agent lineman Ted Karras. The team has yet to make a formal offer, per Jackson, but the sides are expected to talk further.

A rotational lineman in New England from 2016-2018, Karras had appeared in at least 13 games every season, but never started more than 2 games in any one season prior to 2019. However, in 2019, Karras became the team’s starting center, starting 15 games.

Karras did not perform exceptionally well but proved to be a solid option. Per Pro Football Focus, Karras ranked as the 20th highest graded center of 38 qualified players. Still just 27, and with only one season as a starter, there may be reason to expect Karras has more upside as well.

Patriots center Ted Karras is believed to have suffered an MCL sprain last night, a source tells Ian Rapoport of NFL.com (on Twitter). A Monday MRI will confirm the diagnosis, but the belief is that he’ll be able to return from the injury at some point this year.

Karras has been having a solid year as the Patriots’ starting center, a role that he was not slated for at the outset of the year. In the offseason, Karras was seeing practice reps at left guard, but injuries forced him into the anchor role on the Pats’ offensive line.

Karras, 26, has appeared in 57 games for the Pats over the last four years, but had only five starts to his credit before 2019. This year, he has been first-string for all of his games while allowing just two sacks on Tom Brady, tying him for fourth among all centers. Meanwhile, he’s been flagged for just three penalties across 798 snaps, the third-highest snap count of any center in the NFL this year.

The Patriots are unlikely to have Karras on the field for Sunday’s game against the Chiefs, but they’ll hope to have him back for some of the final regular season games of the year, plus the playoffs.