Yesterday, Raiders coach Jon Gruden indicated that the organization was set to move on from Vadal Alexander. Today, the team made the move official, as the Raiders announced that they have waived the offensive lineman with a non-football injury designation. 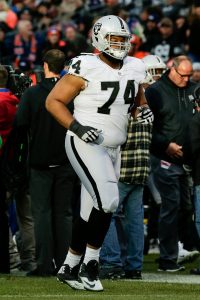 Even prior to Gruden’s announcement, things weren’t looking good for the 24-year-old. The lineman was already suspended for four game after violating the NFL’s policy on performance-enhancing substances, and he was a no-show when Raiders’ camp opened. Alexander was removed from the team’s 90-man roster when he failed to show up, so this move won’t open a roster spot for the Raiders.

The 2016 seventh-round pick out of LSU appeared in nine games (five starts) as a rookie, including an appearance at tight end. He appeared in 15 games (four starts) last season, mostly contributing as an offensive guard. Alexander also has some experience playing offensive tackle.

The six-foot-five, 326-pound lineman was already going to struggle for playing time, especially after the Raiders added rookies Kolton Miller and Brandon Parker this offseason. With Alexander now out of the picture, perhaps one of Oday Aboushi, Jylan Ware, Denver Kirkland, and James Stone will have a better shot at making the opening day roster.

Despite being a seventh-round pick, Vadal Alexander served as a key depth piece for the Raiders during his first two NFL seasons. He started five games as a rookie and four last season.

But he appears to be on his way out of Oakland. Jon Gruden said Monday (via Michael Gehlken of the Las Vegas Review-Journal, on Twitter) the Raiders are likely to move on from the third-year blocker in the next few days.

In addition to being suspended for four games for violating the NFL’s policy on performance-enhancing substances, Alexander did not report to Raiders camp. The Raiders also made significant additions to their offensive line this offseason, using a first-round pick on Kolton Miller and a second-round selection on Brandon Parker.

With two years remaining on his contract, the 24-year-old Alexander would be placed on waivers if the Raiders indeed cut ties with him.