The Lions and tackle Ricky Wagner have agreed to terms on a deal, NFL reporter Rand Getlin tweets. The deal will pay him more than $9MM per year, Ian Rapoport of NFL.com tweets. It’s a five-year contract for Wagner, reports Dave Birkett of the Detroit Free Press (via Twitter). 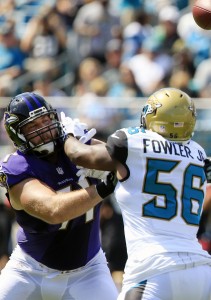 Throughout the offseason, we’ve heard rumblings of Wagner fetching around $10MM/year, a staggering number for a right tackle. However, salaries are on the rise across the board thanks to the cap increase and Wagner was in great position to get paid given the lack of quality tackles in this year’s free agent crop. It also helps that the draft is soft on tackles.

The Lions are a natural fit for the 27-year-old, as offensive lineman Riley Reiff is also a free agent. The team has tackles Taylor Decker, Corey Robinson, and Pierce Burton on the books for next season.

Until now, Wagner spent his entire four-year career with the Ravens after being selected in the fifth round of the 2013 draft. The offensive tackle played in 62 total games for Baltimore, including 47 starts.

I had ranked Wagner as the second-best offensive tackle available in free agency. The veteran slotted below Andrew Whitworth and above Russell Okung, though I had him slated to make more money than both.

The rival Bears were said to also have interest in Wagner, as were the Texans and Vikings. There were reports that the Ravens were also interested in retaining the lineman.