The Seahawks are looking to add some competition behind starter Russell Wilson and that could lead them to sign a high-profile signal caller. When asked about the possibility of signing Colin Kaepernick or Robert Griffin III on Monday, Carroll said they are monitoring both players. 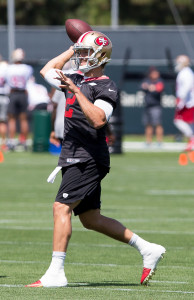 “We’re looking at everybody. We really are,” Carroll said (via ESPN.com’s Sheil Kapadia). “We’ve been tracking everything that’s going on, and we’ve got cap and roster issues and stuff like that that we’re still trying to manage properly. But quite frankly, yes, we are looking at all those guys.”

As it stands, Trevone Boykin is slated to be Wilson’s primary backup, but his March arrest probably has the team considering other options. Jake Heaps and UDFA Skyler Howard are also on the roster, but both lack NFL experience.

With today’s statement from Carroll, the Seahawks become the first known team to express any level of interest in Kaepernick or Griffin. Kaepernick, it seems, hasn’t found much of a market because of his controversial political views. Griffin, meanwhile, was lobbying for a chance with the Jets earlier this offseason but that interest was not reciprocated.

A case can be made that Kaepernick had something of a bounce back season in 2016 when he threw for 16 touchdowns against four interceptions and finished second among QBs in rushing yards with 468. When it comes to Griffin, no one really knows what to make of him after he missed all but five games in 2016. In that limited sample with the Browns, Griffin went 1-4 with two TDs against three picks and a poor 59.2% completion rate. We haven’t seen Griffin turn in anything close to a real season since 2014 and he hasn’t been able to reprise his outstanding 2012 rookie season.