The Vikings have now landed premier free agents on both sides of the ball. Sheldon Richardson has agreed to a one-year deal with Minnesota, Adam Schefter of ESPN.com tweets. 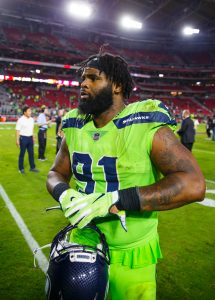 The Vikings were the only team known to have met with Richardson and it didn’t take long for a deal to come together. The Vikings wined and dined Richardson a bit on Friday and pitched him with new quarterback Kirk Cousins in tow.

The Vikings used much of their cap space on Cousins, but they still had enough left to sign one of the most talented defensive linemen in this year’s free agent crop, thanks in part to the restructuring of Latavius Murray‘s deal. The 27-year-old (28 in November) had just one sack last season, but the advanced metrics showed that he was still starting caliber, even in a down year.

Richardson did his best work with the Jets, particularly in 2014 when he racked up eight sacks. His production was a bit up-and-down as he was moved at times from defensive tackle to the outside and even to linebacker, but he was a consistent threat.

Richardson, presumably, was after a multi-year deal, but the one-year pact with Minnesota will give him a chance to rebuild his value and potentially cash in next March. He joins an already stacked Vikings D and will pair with Linval Joseph in the middle. Danielle Hunter and Everson Griffen will serve as the starting bookends with Anthony Barr, Eric Kendricks, and Ben Gedeon filling out the front seven.

The Seahawks have now lost two high-profile defensive linemen in Richardson and Michael Bennett (via trade with the Eagles), but Richardson’s departure should at least net them some return in compensatory picks.