Poll: Will The Lions Draft Jeff Okudah At No. 3? 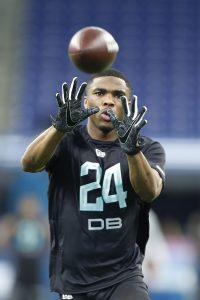 That doesn’t mean for sure that Burrow and Young will be the first players off the board on Thursday, but that’s the general sense in the NFL world. The real question marks start at No. 3, where the Lions may be split between their favorite draft crushes. Auburn defensive tackle Derrick Brown could provide them with the run-stopping solution they hoped to have in Damon Harrison. Clemson standout Isaiah Simmons could bolster them at both edge and safety, all in one shot. Still, Ohio State cornerback Jeff Okudah is very much in the mix, and the Lions have reportedly been zeroing in on him for weeks.

There’s a convincing case to be made for each, but the Lions have a massive hole to fill at cornerback after trading Darius Slay to the Eagles. Simmons and Brown may have attributes that they want, they don’t address the team’s biggest need. Okudah, with cheetah-like speed and the smarts to stay on the good side of zebras, seems like a sensible pick.

Now, it’s time for your take. Will the Lions take Okudah with the No. 3 pick? Or, will they go in a different direction (perhaps by trading from No. 3)?

Cast your vote below (link for app users) and break it all down in the comments.