Prior to the Rams landing Matthew Stafford, the Patriots explored a deal for the 13th-year quarterback. Such efforts may not apply to all of this year’s starter-caliber passers on the trade market. 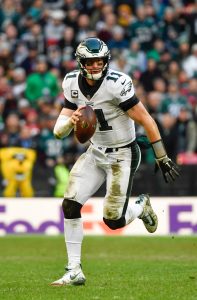 The Patriots are not believed to be a serious suitor for Carson Wentz, according to Jeff Howe of The Athletic (subscription required). While Tom Brady winning a Super Bowl with the Buccaneers has amplified the Pats’ issue at quarterback, they appear uninterested in competing for Wentz.

The Bears and Colts are viewed as the top teams in play for Wentz, for whom the Eagles are seeking a Stafford-type trade haul. Other teams have discussed Wentz with the Eagles as well. Not much has emerged on the Wentz front in the past few days, pointing to teams not reaching the Eagles’ asking price. Philadelphia is tentatively expected to collect a first-round pick for the 28-year-old passer, but nearly a week after rumors emerged the five-year veteran was on the market, he remains an Eagle. The Patriots hold pick No. 15 overall.

A low-cost flier on Cam Newton did not work out for the Pats, who are prepared to try someone else in an effort to replace Brady. The Patriots were interested in Marcus Mariota last year; the Raiders may be willing to trade their backup. And longtime New England QB2 Jimmy Garoppolo‘s status is not certain in San Francisco, with the 49ers in on the Stafford sweepstakes as well.

The Pats passed on the likes of Andy Dalton and Jameis Winston last year, waiting until late June to add Newton. Total QBR slotted Newton 30th last season. Wentz came in at 28th, though he ranked 11th in this metric in 2019 and first in 2017 — prior to his season-ending knee injury.