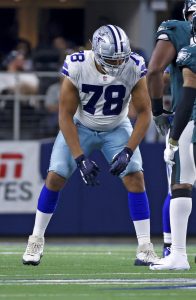 Neither Steele nor the staffers (with the possible exception of Cedric Smith) will be available for the Cowboys’ game against the Saints on Thursday. La’el Collins will get the start at RT in Steele’s absence.

Steele, a 2020 UDFA, served as Collins’ primary replacement last season, which Collins missed due to hip surgery. This year, Collins was hit with a five-game PED suspension, and starting left tackle Tyron Smith has missed time with an ankle injury. So Steele has played both LT and RT in 2021, and Pro Football Focus’ metrics paint him as the 53rd-best offensive tackle out of 81 qualifiers.

To combat further spread of the virus, the Cowboys will be working virtually through Monday and will have daily testing through Tuesday. The good news is that WR Amari Cooper, who has missed Dallas’ last two games due to a positive COVID test of his own, should be back in action for the Saints game, as Watkins writes.

The Cowboy’s other top wideout, CeeDee Lamb, who missed the club’s Thanksgiving loss to the Raiders due to a concussion, is also expected to clear protocols and suit up against New Orleans (Twitter link via Adam Schefter of ESPN.com).