Despite signing a five-year contract to coach the Jaguars out of mediocrity, ESPN’s Adam Schefter reports that, after only eleven months, Urban Meyer is no longer the head coach in Jacksonville. Urban had a bit of a rocky debut season in the NFL, going a paltry 2-11 in a year full of controversy. The firing comes a little over a month after Jaguars’ owner Shad Khan was reportedly “all in” on the first-year head coach. 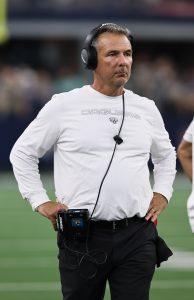 Meyer was a headline hire for Jacksonville, replacing Doug Marrone as head coach shortly after the Jaguars had secured the worst record in the 2020 NFL season. Meyer had shown his abilities as an accomplished coach in the college ranks, winning three national titles between his years in Gainesville and Columbus. The value of his five-year deal was never officially confirmed, but reports claimed that Meyer was asking for $12MM annually, which would have made him the second-highest paid coach in the NFL under Patriots’ head coach Bill Belichek.

The Meyer-era didn’t take long before showing it’s sour potential. In July, the Jaguars were one of three teams penalized for violating the CBA rules for offseason workouts. The Jaguars were fined a nominal $200K and Meyer was handed a $100K fine, as well. Not two weeks later, Meyer was subpoenaed by the U.S. District Court of the Southern District of Iowa in relation to Chris Doyle, the former University of Iowa strength coach who left the school to join Meyer’s staff in Jacksonville. Doyle was the subject of a $20MM racial discrimination civil lawsuit filed by eight former Iowa players. The hiring of Doyle, itself, had created a slew of backlash. Meyer drew yet another offseason headline with comments that COVID-19 vaccination statuses were being considered when trimming the team’s roster down to 53 players, leading to an investigation by the NFLPA.

In October, Meyer once again found himself under fire after a viral video surfaced showing him with a young woman at his restaurant in Columbus. The Jaguars had just played a Thursday night game in Cincinnati. After the loss to the Bengals, Meyer didn’t fly back to Florida with the team, electing to stay in Ohio to visit family. Meyer claimed he had gone with family members to the restaurant where the viral video had been recorded. He spent the following Monday apologizing to the team, his family, and Khan.

Since then, there have been several reports of discontent within the Jaguars’ organization, with the most recent coming from kicker Josh Lambo who spoke about a preseason incident in which the Jaguars’ coach kicked Lambo while he was stretching. From continuous rumors that Meyer could have interest in open college coaching jobs to expectations that Meyer would fire the entire staff at the end of the season, it’s safe to say that the Meyer-Jacksonville partnership has not gone according to plan.

Ian Rapoport, of NFL Network, was quick to follow Schefter in tweeting that, with Meyer out, offensive coordinator Darrell Bevell will serve as head coach in an interim capacity. Bevell is in his 21st year of coaching in the NFL, with previous stints as the quarterbacks coach in Green Bay and the offensive coordinator in Minnesota, Seattle, and Detroit. Bevell actually has experience as an interim head coach, having led the Detroit Lions to a 1-4 finish following the firing of then-head coach Matt Patricia just last year. The Jaguars’ offense has struggled under Bevell with a rookie quarterback and an identical offensive line to the line from 2020 that helped Jacksonville earn the number one overall pick in the 2021 NFL Draft. They currently rank 30th in total offense and 31st in scoring offense.

Bevell should have a soft opening term as interim coach in Jacksonville, with matchups against the Texans and Jets, before finishing the season with the Patriots and Colts. Meanwhile, we’ll have to wait and see just how genuine the college interest in Meyer was as the mired coach navigates the aftermath of a tumultuous 2021 campaign.