In another expected move to begin ‘Black Monday’ in the NFL, the Bears are parting ways with Head Coach Matt Nagy, according to ESPN”S Adam Schefter (Twitter link). Nagy becomes the fourth recent firing in the NFL, joining Vic Fangio from the Broncos, Mike Zimmer from the Vikings and Brian Flores from the Dolphins. 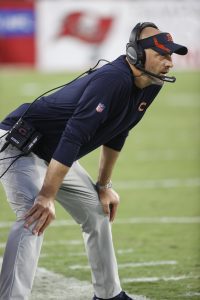 It had long been expected that Nagy was on his way out of Chicago as the 2021 season progressed with offensive struggles continuing with and without rookie quarterback Justin Fields. While the 43-year old survived rumors leading up to their Thanksgiving day game against the Lions that he would be let go midseason, he didn’t do enough in the remainder of the campaign to change ownership’s mind.

Not long after the news of Nagy’s firing broke, NFL Network’s Tom Pelissero Tweeted that GM Ryan Pace has also been fired. Pace had held the GM title for seven seasons, a span that included the drafting of Mitch Trubisky in 2017 and only two postseason appearances (with no wins). It was reported in November that Pace may be safe for one more year, but the Bears are obviously cleaning house instead.

After four seasons, Nagy finishes with an overall regular season record of 34-31, along with two postseason appearances that each ended in first-round exits. After a 12-4 season that earned him Coach of the Year honors in 2018, the Bears went 8-8 for the next two campaigns and ended up a disappointing 6-11 in 2021.

Even before it was made official that Nagy was let go, a few names came up recently who may be in line to replace him. According to a recent report, two candidates to keep an eye on are Colts defensive coordinator Matt Eberflus and Patriots linebackers coach Jerod Mayo. Other options have been linked to the Windy City as well, but in any event it is believed the new HC will lean more towards the ‘leader-of-men’ type than Nagy’s ‘quarterback whisperer’ style.

Along with Jacksonville and Las Vegas, the Broncos’ decision to move on from Fangio over the weekend in addition to the three firings today brings the total number of head coaching vacancies in the league to six. With Pace out, there are now two open GM positions.