Justin Houston will stay in Baltimore. The Ravens reached an agreement to bring back the veteran edge rusher. The team announced the one-year deal Thursday. 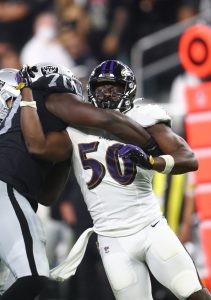 The Ravens had placed a seldom-used UFA tender on Houston, giving them exclusive negotiating rights after training camps began later this month. Despite Houston being free to talk to other teams until then, he will rejoin the Ravens, who have been linked to edge rushers for weeks.

This marks the second of 2022’s UFA tender recipients to reach an agreement before the late-July deadline changed negotiation equations. Melvin Ingram, given a UFA tender by the Chiefs earlier this offseason, signed with the Dolphins. Houston, 33, will help a Ravens team that was looking into edge players before Jaylon Ferguson‘s tragic death.

After two seasons with the Colts, the former Chiefs All-Pro outside linebacker signed a one-year $2.28MM deal to join a Ravens team that had lost Matt Judon and Yannick Ngakoue in free agency. No similar defections occurred this year, but the team’s main offseason addition at the spot — second-rounder David Ojabo — is rehabbing a torn Achilles sustained during pre-draft workouts. It will be a while before Ojabo’s NFL debut happens, if it occurs in 2022. Auxiliary edge Tyus Bowser is also rehabbing from Achilles surgery, a procedure he underwent after suffering a tear in January. These issues had left Baltimore shorthanded on the outside.

Last season, Houston accumulated just 4.5 sacks. The only season in which the four-time Pro Bowler tallied fewer came in 2016, an injury-shortened campaign. Houston’s 24 pressures ranked outside the top 50 last season. But the Ravens, who drafted Odafe Oweh in the 2021 first round, are seeking a complementary pass rusher alongside their top OLB investment. They visited with Jason Pierre-Paul earlier this offseason but are circling back to a Houston-Oweh tandem. This move also comes after Baltimore changed defensive coordinators. Its new DC, Mike Macdonald, was not with the team in 2021. Houston’s first Ravens season came during Macdonald’s year at Michigan.

While Houston is well past his peak years, which once secured him a six-year deal worth $101MM contract at the 2015 franchise tag deadline, he has managed to shake the injury trouble that plagued him during the second half of his Kansas City stay. The Chiefs cut Houston after the 2018 season, and the former third-round pick did not miss a game in two Colts campaigns. Houston totaled 19 sacks with Indianapolis. He played 15 games for an otherwise injury-ravaged Ravens team last season.