Indicating he would include internal options for what he labeled one of the best jobs available this offseason, John Harbaugh has followed through on that. Two of Greg Roman‘s lieutenants have interviewed to replace him. 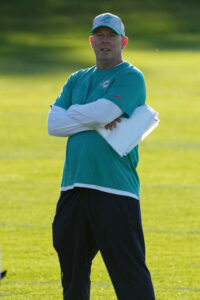 While Godsey joined Harbaugh’s staff in 2022, Urban has been Lamar Jackson‘s position coach throughout the star quarterback’s Baltimore tenure. That will count for something, as the Roman-Urban-Jackson troika was responsible for a quick turnaround that involved the team radically redesigning its offense to suit Jackson. But the former MVP may have grown tired of the setup. Jackson endorsed a tweet reminding he ran a pro-style attack at Louisville, providing another sign of unhappiness with recent Baltimore happenings. Despite an unusual end to his season and being mentioned loosely in trade rumors, Jackson will have input in the Ravens’ OC search.

Urban, 49, began his NFL run on Andy Reid‘s Eagles staffs and has stayed at least five years with each of his three NFL employers; Urban also spent seven years as the Bengals’ wide receivers coach during the 2010s. It will be interesting to see if the Ravens retain him, given Roman’s departure.

Godsey, 44, has experience as an OC, having served in that role with the Texans and Dolphins. Bill O’Brien promoted the ex-Patriots staffer to OC in 2015 but fired him after the ’16 campaign. Godsey has both coached QBs and tight ends during his time in the pros, holding dual roles of co-OC and tight ends coach under Brian Flores in 2021. With Godsey and Eric Studesville running the offense, Miami ranked 22nd in scoring last season.

It would surprise if the Ravens hired an in-house Roman replacement, though the team has promoted from within (Roman, Marty Mornhinweg) to fill this position the past two times it became open. Thus far, Baltimore has contacted seven coaches about the job. Here is how the Ravens’ search looks so far, via PFR’s offensive coordinator search tracker.