Veteran Brandon LaFell suffered a torn Achilles back in mid-November, but the receiver doesn’t believe that the injury will end his career. Speaking to Michael Gehlken of the Las Vegas Review-Journal, the Raiders wideout made it clear that he’ll retire on his own terms. 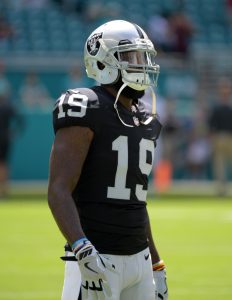 “I’m definitely coming back,” LaFell said. “I’m leaving on my own terms. I’m not leaving like this. I’ll be back. I’ll definitely be back.”

Of course, it remains to be seen if the 32-year-old will be able to garner any interest on the free agent market. LaFell estimated that he’ll be fully recovered by the time June rolls around, which should mean he’ll be fully healthy for training camp. Of course, that recovery could take longer than expected, and it’s unlikely a team’s going to take a chance on the receiver until he can prove that he’s back to full strength.

Despite starting five of his six games, LaFell saw a reduced role during his cameo in Oakland. The wideout ended up hauling in 12 of his 16 targets, compiling 135 yards and two scores. The veteran didn’t earn enough snaps to earn a spot on Pro Football Focus‘ ranking of the league’s wide receivers, but his score would have place him in the bottom-half of the league. The six-foot-three receiver is now four seasons removed from his 953-yard campaign with New England back in 2014, although he did compile 862 receiving yards with the Bengals in 2016.

A nine-year veteran, LaFell served as a solid No. 2 or 3 receiver on a handful of squads, most recently with Cincinnati before signing with the Raiders in 2018. LaFell emerged as a serviceable pass catcher in his short time with Oakland, logging at least three grabs in three consecutive games. He posted two catches for 29 yards and a touchdown prior to the injury. He finished the 2018 season with 13 catches for 135 yards and two touchdowns.

With Amari Cooper traded to Dallas, and Jordy Nelson and Martavis Bryant both sidelined with knee injuries, the Raiders depth at receiver has dwindled down to veteran Seth Roberts and rookie Marcell Ateman. Should Nelson and Bryant remain out, the Raiders will likely look to bring in a veteran during the week. 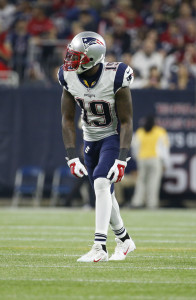 Rapoport says it’s a one-year deal “with upside”, noting “there was a need after Martavis Bryant was released.” LaFell was released by the Bengals last month. At the time, LaFell’s agent said he had been asking for his release from the Bengals due to unhappiness with his role.

LaFell spent two seasons as the number two receiver in Cincinnati, with varying success. After compiling 64 catches for 862 yards and six touchdowns in 2016, LaFell had just 52 grabs for 548 yards and three scores last year. A week after his release, it was reported that the Browns might have some interest, but nothing ever came of it and his market has been quiet since.

As Rapsheet points out, the Raiders were in need of a veteran receiver after Bryant was cut due to an impending suspension. Oakland gave up a third round pick for Bryant, who ended up never playing a down for the team, and they’ll look to replace some of his expected production with LaFell. LaFell will turn 32 in November, and is another aging piece added to this veteran Raiders team. His best season came with the Patriots in 2014, when he caught 74 passes for 953 yards and seven touchdowns.

The Browns may have renewed interest in Brandon LaFell, Tony Grossi of ESPN.com (on Twitter) hears. The wide receiver was released by the Bengals last week, freeing him up to sign with any club.

LaFell was the Bengals’ No. 2 WR for the last two years, but his production tailed off a bit last season. After compiling 64 catches for 862 yards and six touchdowns in 2016, LaFell had just 52 grabs for 548 yards and three scores in 2017. Then, this summer, he started “feeling the heat” from other wideouts in camp this summer, according to coach Marvin Lewis. With other options to consider, including speedy 2017 first-round pick John Ross, the Bengals no longer had any use for LaFell.

LaFell had a tremendous 2014 season with the Patriots as he set career highs with 74 receptions, 953 yards, and seven touchdowns. He added another two TDs in the postseason, including one in the Super Bowl.

Few are expecting LaFell to reprise that kind of production in 2018, but he could be an option for the Browns as they sort out Josh Gordon‘s situation. The Browns could also use some additional depth following the trade of former first-round pick Corey Coleman.

The Bengals released wide receiver Brandon LaFell, according to Mike Garafolo of NFL.com (on Twitter). LaFell’s agent tells Garafolo that the receiver has been pushing for his release “for some time now” and is grateful to have been freed from his contract.

The transaction will allow LaFell, a vested veteran, to sign with any team. As the Patriots get set to move on from Jordan Matthews, one can’t help but wonder if a reunion could be in the cards for LaFell. Then again, Thursday’s signing of Eric Decker could take LaFell out of consideration.

LaFell has been the Bengals’ No. 2 WR for the last two years, but his production tailed off a bit last season. After compiling 64 catches for 862 yards and six touchdowns in 2016, LaFell had just 52 grabs for 548 yards and three scores last year.

Meanwhile, he started “feeling the heat” from other wideouts in camp this summer, according to coach Marvin Lewis. That includes 2017 first-round pick John Ross, which is good news for the Bengals but probably meant a reduced role for LaFell.

The Bengals appear set to head into 2018 with A.J. Green and Ross as their top receivers. After that, they have a young group pushing for playing time including Tyler Boyd, Josh Malone, Cody Core, rookie Auden Tate, and Alex Erickson.

You’re not likely to see the Bengals drop Brandon LaFell from the roster, Katherine Terrelle of ESPN.com tweets. While there is lots of young talent at wide receiver, cutting LaFell would require a $3MM+ dead money hit just after re-signing him this year. He also has a strong mentor/mentee relationship with A.J. Green that coaches do not want to bust up. The Bengals have Green, speedy rookie John Ross, Tyler Boyd, LaFell, and fourth-round pick Josh Malone as their top five receivers. Youngsters Cody Core, Alex Erickson, Jake Kumerow, and Chris Brown are left to fight for a spot that may or may not be available.

The Bengals and veteran wide receiver Brandon LaFell agreed on a deal one day before the official start of free agency, Ian Rapoport of NFL.com tweets. It’s a two-year accord, Katherine Terrell of ESPN.com tweets. He’ll get $9MM worth of base pay over the life of the deal, Jim Owczarski of the Cincinnati Enquirer reports (via Twitter).

The 30-year-old wideout rebounded in 2016, hauling in 64 passes for 862 yards and six touchdowns. This helps keep A.J. Green‘s complementary crew together, along with Tyler Boyd and Tyler Eifert, after the Bengals lost both Marvin Jones and Mohamed Sanu in free agency last March.

LaFell indicated recently he wanted to return to Cincinnati, and he’ll get his wish. The Bills had interest in acquiring the eighth-year pass-catcher, but LaFell will sign his second Bengals contract and continue to work in the Andy Dalton-led offense. Last year, he signed for one year and $2.5MM. After rebuilding his value to some degree after an injury-plagued 2015 season, it will be interesting to see what LaFell earns on his most recent contract.

The bounce-back 2016 campaign doubled as the former Panthers draft choice’s second-most receiving yards in a season. The 2014 slate in which he functioned as one of Tom Brady‘s auxiliary targets represents LaFell’s best at 953 yards. But in Cincy last season — on a team that did not have Green and Eifert together for long — LaFell increased his yards-per-catch figure to 13.5 from his best NFL season.

With Tyrod Taylor seemingly returning to the Bills, the team is now looking to provide the quarterback with some weapons. According to Jim Owczarski of Cincinnati.com (via Twitter), the Bills have shown interest in free agent wideout Brandon LaFell. The writer notes that the veteran is a priority of the Bengals, and he adds that the Bears have also expressed interest.

The 30-year-old had one of the most productive seasons of his career in 2016. The wideout hauled in 64 catches for 862 yards and six touchdowns. LaFell hasn’t collected less than 500 yards since his rookie campaign. The veteran joined the Bengals last offseason following two years with the Patriots.

LaFell was mentioned as an honorable mention in our rankings of the best free agent wideouts.