The Rams are expected to hire former Broncos GM Brian Xanders to a senior personnel role, a source tells Tom Pelissero of NFL.com (on Twitter). Xanders was most recently with the Lions. 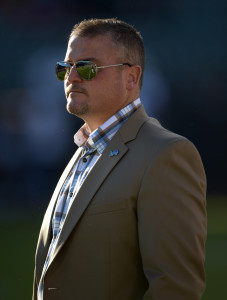 Xanders served as the Broncos’ GM from 2009 through 2012. Some time after that, he found his way to the Lions. When they shook up the front office in 2016, Xanders stayed on board but lost a lot of his power. With no connection to GM Bob Quinn, it made sense for the two parties to go their separate ways.

Xanders comes to the Rams during a pivotal year for Rams GM Les Snead. Snead was retained as former coach Jeff Fisher was shown the door, but there’s no guarantee that he’ll get to stick around for Sean McVay‘s second year as coach. Xanders will be in the building to help advise Snead, but he also has the credentials to interview for the job if a change is made.

The Lions and executive Brian Xanders have parted ways, as Neil Stratton of Inside The League tweets. Xanders’ departure has been confirmed by Justin Rogers of The Detroit News (Twitter link).

Xanders was hired by the previous regime in Detroit to serve as the club’s senior personnel executive. With no connections to current GM Bob Quinn, he lost some of his power in the last year and he’ll look for a better opportunity.

From 2009 through 2012, Xanders served as the Broncos’ GM. In recent years, he has been in the mix for multiple top jobs, including the Dolphins’ GM job in 2014 and the Browns’ search for a lead exec last year.

Former Lions GM Martin Mayhew is now with the 49ers’ Senior Personnel Executive, so that could be one potential fit for Xanders as he looks for his next job.

WEDNESDAY, 8:09am: In addition to speaking to Xanders, the Browns also interviewed former Falcons director of player personnel Lionel Vital for their top personnel job, sources tell Cabot. Vital was let go by Atlanta earlier this month after spending three years with the team.

TUESDAY, 7:44pm: The Browns have interviewed Lions senior personnel executive Brian Xanders for their top available personnel position, a league source tells Mary Kay Cabot of Cleveland.com. Xanders was one of two men to interview for the job on Tuesday, though the identity of the other candidate to interview today is not yet known.

Besides the former Broncos GM, the Browns have also talked with former Dolphins GM Dennis Hickey and former Lions general manager Martin Mayhew and they have also been linked to ex-Eagles executive Rick Mueller. Whoever the Browns’ next big hire is will not carry the title of GM. Their next “Executive Vice President of Player Personnel” will have input when it comes to the roster, but Browns executive VP of football operations Sashi Brown will have final say.

Xanders, 44, comes with tons of experience having just completed his third season with the Lions and 22nd in the NFL. There’s no exact timetable for a hire, but the team is optimistic about making a decision shortly.

“We’re still on track to hopefully wrap things up in the next week or two,” said Brown. “We feel good about it. We’ve talked to some really talented people around the league despite not being able to interview everyone we were originally slated to. I feel like we’ll find a really talented personnel executive to come in and lead that function for us.”

It’s Saturday, and that means ESPN.com’s NFL writers are opening their mailbags and answering questions from readers. Let’s check out some of the more interesting notes, with a cameo from Jim Wyatt of TitansOnline.com…

1:11pm: Speaking to the media this afternoon, Martha Ford announced that Sheldon White, the Lions’ director of pro personnel, will act as interim general manager. Allison Maki will be the acting COO, and there will be no changes to the coaching staff at this time, per Ford (link via Michael Rothstein of ESPN.com). The team will soon begin a search for candidates to fill the positions permanently.

11:16am: The Lions’ front office received a major shake-up today, according to Adam Schefter of ESPN.com, who reports (via Twitter) that the organization has parted ways with general manager Martin Mayhew and president Tom Lewand.

Just 10 days ago, the Lions made significant changes to their coaching staff, firing offensive coordinator Joe Lombardi and a pair of offensive line coaches. Detroit had hoped the changes to the offensive coaching staff would jump-start the team, but reports in the wake of those moves suggested it was possible those wouldn’t be the last ones made by the team this season.

Albert Breer of the NFL Network noted at the time (via Twitter) that there had been “rumblings around the league about larger-scale changes in Detroit,” since Martha Ford is now in charge of the ownership group, and observers weren’t sure what to expect from her. It now appears those rumblings were well-founded, as ownership is making large-scale changes to the organizational structure.

While teams typically wait until the offseason to replace general managers and other decision-makers in the front office, the Lions had been one of the most underachieving teams in the NFL this season, and it appeared to be just a matter of time before the other shoe dropped. Coming off an 11-5 campaign that earned them a playoff berth in 2014, the Lions are off to a league-worst 1-7 start this year, and have been outscored by 96 points in just eight games.

According to Ian Rapoport of NFL.com (via Twitter), there’s a “total wipeout” happening in Detroit today, with bosses “going through the building deciding who stays and goes.” So it appears Mayhew and Lewand won’t be the only casualties.

For now, head coach Jim Caldwell still has his job, though he’s hardly a lock to keep it. The Lions may want to identify a new general manager before replacing Caldwell, to give that new GM an opportunity to make the decision on Caldwell’s future, and potentially to hire his own man for the job.

Matt Miller of Bleacher Report tweets that one “hot” name for the Lions’ GM vacancy – at least on an interim basis – is Brian Xanders, who is currently a senior personnel executive for the club. Whoever takes over that role will have several key decisions to make in the coming months, including deciding whether to extend Haloti Ngata, and possibly addressing Matthew Stafford‘s and Calvin Johnson‘s contracts. Stafford has been extremely inconsistent this season and is owed a non-guaranteed $17MM base salary in 2016, while Megatron’s cap number is set to leap to $24MM+.

Browns executive Ray Farmer, who had been considered a frontrunner for the Dolphins’ general manager job, will forgo a second interview with Miami to remain in Cleveland, according to Jason La Canfora of CBSSports.com. After initially reporting (via Twitter) that Farmer had decided to stay with the Browns, La Canfora added that John Wooten of the Fritz Pollard Alliance urged Farmer to reconsider and take a second interview to work through some of his reservations about the position (Twitter links). However, it doesn’t appear as if Farmer will heed that recommendation, as the Browns’ front office confirmed today that the assistant GM will continue on with the club (Twitter link via Nate Ulrich of the Akron Beacon Journal).

By pulling his named out of contention, Farmer becomes the latest in a string of GM candidates to come off the board for the Dolphins. Most recently, Jason Licht, another strong contender for Miami’s opening, reached an agreement with the Buccaneers to become the new GM in Tampa Bay.

La Canfora reported (Twitter links) last night that Omar Kahn of the Steelers, Lake Dawson of the Titans, and Brian Xanders of the Lions weren’t considered finalists, leaving Dennis Hickey of the Bucs and internal candidate Brian Gaine as contenders for the job. According to a tweet from NFL.com’s Ian Rapoport though, Dawson will receive a third interview this week with the Dolphins, so perhaps the removal of Farmer from the mix prompted the Dolphins to reconsider Dawson’s candidacy.

The Dolphins are expected to hire a GM next week, according to Andrew Abramson of the Palm Beach Post.