Former Redskins tight end Fred Davis hasn’t played in the NFL in years, but that’s not stopping him from chasing his goal of a return to professional football. Late last week, Davis participated in the XFL’s summer showcase with an eye on joining the upstart league and, ultimately, getting back on the NFL radar. 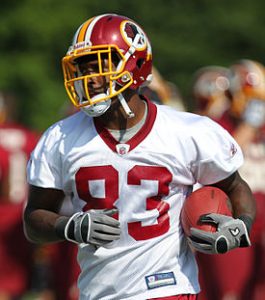 “For me, that’s what it’s really about — having the chance to still be able to play the game you love to play, that you’ve played for a long time,” Davis said. “Even though you take a break off, it doesn’t mean you can’t play it now.”

Davis, the Redskins’ offensive player of the year in 2011, hasn’t played in a game since he violated the NFL’s substance-abuse policy in 2014. The former second-round draft pick says that he has stuck to a training regimen since being pushed out of football and is hopeful that he’ll get an opportunity to prove himself once more.

Prior to 2014, Davis spent six seasons in Washington and caught 162 passes and 13 touchdowns. His best year came in 2011, when he amassed 59 receptions and 796 yards. Davis was reinstated in time for the 2015 season and hooked on with the Patriots, but he was released by New England in June.

Now 33, Davis has a short window to stage his comeback.

The Patriots continue to make changes at the tight end spot, announcing today (via Twitter) that they’ve released Fred Davis, just over a month after signing him. Davis is the second notable tight end to be cut by New England in June, as the team also waived Tim Wright last week.

Davis, 29, sat out all of last season after the NFL suspended him indefinitely for substance-abuse violations. The league reinstated him earlier in the offseason. Prior to 2014, the former second-round pick spent six seasons in Washington and caught 162 passes and 13 touchdowns. His best year came in 2011, when he amassed 59 receptions and 796 yards.

Davis’ contract with the Patriots didn’t include any guaranteed salary, and his bonus money consisted of a modest workout bonus and unearned roster bonuses, so the move won’t have an impact on the club’s salary cap.

With Davis and Wright no longer in the mix, Rob Gronkowski, Scott Chandler, Michael Hoomanawanui, and sixth-round rookie A.J. Derby figure to handle the majority of the tight end load heading into training camp.

The Patriots and free agent tight end Fred Davis have agreed to a one-year contract, according to ESPN’s Adam Schefter (via Twitter). Financial terms of the deal are not yet available.

Davis, 29, sat out all of last season after the NFL suspended him indefinitely for substance-abuse violations. The league reinstated him last week. Prior to 2014, he spent six seasons in Washington and caught 162 passes and 13 touchdowns. His best output came in 2011, when he amassed 59 receptions and 796 yards.

Former Washington tight end Fred Davis has been reinstated by the NFL, more than a year after he was suspended indefinitely by the league for substance abuse violations, according to Pro Football Talk (Twitter link). Davis is now free to sign with any team and play in the 2015 season.

Davis, a former second-round pick, had some productive seasons in Washington, including a 2011 campaign that saw him set career highs in catches (59) and receiving yards (796). However, injuries and off-field issues – including legal run-ins – derailed his career. The 29-year-old hasn’t seen the field for 2013, a season in which he grabbed just seven balls for 70 yards.

With a handful of teams around the NFL in need of a tight end, there may be a club that decides to take a flier on Davis. However, after the veteran tight end spent a year away from the game, I have my doubts that he’ll ascend a depth chart and become a primary weapon for an NFL offense anytime soon.

Giants linebackers coach Jim Herrmann believes the team may have stumbled on a true gem with fifth-round pick Devon Kennard, writes Howie Kussay of the New York Post. “I liked him on film, obviously our college scouting liked him on film,” Herrmann said. “He played at USC and he played under four different coordinators, and played four different positions, so I think he kind of got lost in the college shuffle a little bit there.” More from around the NFL..

THURSDAY, 9:54pm: Davis was pulled over and charged with driving under the influence, tweets Mike Jones of The Washington Post. Jones added that the arrest took place at 3:45pm EST in Tysons Corner, Virgina.

WEDNESDAY, 5:47pm: Free agent Fred Davis has been suspended indefinitely for substance abuse, according to Dan Hanzus of NFL.com. This marks the second time the Redskins tight end has been hit with a drug-related suspension. He also missed the final four games of the 2011 season.

Davis issued a statement explaining that he unknowingly ingested a banned substance in supplement he took “a couple of months ago.” However, as Zac Boyer of The Washington Times (via Twitter) points out, that explanation doesn’t quite add up. The league says that the suspension is a result of substance abuse and PEDs would fall under a different category.

The 28-year-old is coming off a season in which he fell behind Jordan Reed on the depth chart and landed in coach Mike Shanahan‘s doghouse. After being hit with the franchise tag for the 2012 season, Davis’ follow-up saw him finish with just seven catches for 70 yards and one touchdown and finish out the year on the inactive list. While he possesses serious skills as a pass-catching tight end, his baggage will undoubtedly hurt him as he tries to land his next deal.

The Redskins’ plan to be active in free agency has already been chronicled, but don’t expect them to add any big name free agents, writes Rich Tandler of RealRedskins.com. While the team should have close to $30MM in cap space, the roster has many holes that need to be filled. If the Redskins re-sign Brian Orakpo, as most pundits and fans think they will, the organization will most likely not have the resources to attract another player on the level of Broncos receiver Eric Decker or Bills safety Jairus Byrd. Other notes on the Redskins:

Earlier today, we heard that the Redskins would be active in free agency, both in retaining their own players and pursuing other options. However, it sounds like one of Washington’s free agents, tight end Fred Davis, may see his stock dip precipitously. Jason La Canfora of CBSSports.com hears from a source that Davis, who has a history of failed drug tests, will face a six-game suspension (Twitter link).