The Jaguars have a new quarterback. On Monday, the Jaguars traded a fifth-round pick to the Steelers in exchange for Joshua Dobbs, as Adam Schefter of ESPN.com tweets.

The Jaguars lost their brand new starter, Nick Foles, to a clavicle fracture in the first quarter of Sunday’s loss to the Chiefs. After that, Gardner Minshew and performed well, even though the team was unable to keep up with the Chiefs’ relentless offense.

Minshew will continue as the Jags’ starter, but Dobbs will be on hand to hold the clipboard in support. Prior to the trade, the Jags did not have another QB on the roster.

Dobbs, a former fourth-round pick, was Ben Roethlisberger‘s top backup last year and appeared in five games as a reserve. This year, he lost his footing to Mason Rudolph, making his superfluous in Pittsburgh.

Minshew, with Dobbs as his backup, will lead the Jaguars against the Texans in Week Two.

When the Steelers took Mason Rudolph in the third round of this year’s draft, many assumed it was the beginning of the end for Josh Dobbs. Since it’s extremely rare for a team to carry four quarterbacks, the conventional wisdom was that Pittsburgh would keep Landry Jones as a veteran backup, Rudolph as the developmental rookie, and that Dobbs would either be traded or cut.

Despite facing questions about his future all summer, Dobbs was focused and showed tangible improvement this preseason. His performance in the fourth preseason game in particular was very strong, and it was enough to convince the Steelers to cut Jones instead.

While Dobbs will enter the season as Ben Roethlisberger‘s backup, the Steelers apparently did have opportunities to trade him, according to Jeremy Fowler of ESPN (Twitter link). Fowler reports that both the Texans and Raiders were interested in Dobbs, but that the Steelers ultimately decided to keep the second-year signal caller from Tennessee.

On Wednesday morning, the Packers traded Brett Hundley to the Seahawks. That deal is unlikely to be the last trade involving a backup quarterback, according to Ian Rapoport of NFL.com (on Twitter). Mike Glennon of the Cardinals, Tom Savage of the Saints, and Joshua Dobbs are the Steelers are among the QBs being discussed by teams of need, Rapoport hears. 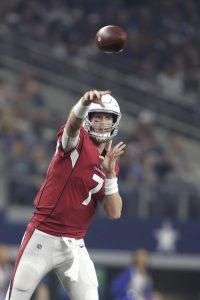 The Cardinals signed both Sam Bradford and Glennon in March, but the QB room changed dramatically in April when they drafted UCLA star Josh Rosen. Rosen may not be ready for primetime, but the Cardinals may feel that he is ready to be a capable No. 2 QB. Glennon flamed out in his one month as the Bears’ starter last year, but he would represent a QB2 upgrade for many teams around the league.

Savage has been long rumored to be on the bubble, but he is now firmly on the trade block following the Saints’ acquisition of Teddy Bridgewater. The Saints project to move ahead with Bridgewater and Taysom Hill as the backups to Drew Brees, leaving Savage without a spot in New Orleans. Savage, a former fourth-round pick out of Pittsburgh, entered the 2017 season as Houston’s starter, but he lost the job to rookie Deshaun Watson rather quickly. He finished the year with 1,412 yards and five touchdowns against six interceptions.

Antonio Brown missed eight out of 10 OTA practices held by the Steelers. While a star player missing OTAs certainly isn’t uncommon, it is for Brown. As laid out by Mark Kaboly of The Athletic, Brown is a “football junkie”and him missing OTAs is something that’s very out of character. Kaboly writes that he “couldn’t tell you the last time that he missed a training camp practice or a regular-season practice” and that “in Brown’s eight previous seasons he may have missed two total OTAs.”

Kaboly notes that even in past seasons where Brown was unhappy with his contract and demanding a new one, he still showed up for OTAs. So what’s responsible for Brown’s sudden prolonged absence from the voluntary portions of the Steelers’ offseason program?

It’s anyone’s guess, but it’s surely a distraction Mike Tomlin and the rest of the Steelers’ coaching staff would rather not have.

Of the 15 quarterbacks selected in last year’s draft, seven ended up starting at least one regular-season game in 2016. The Rams’ Jared Goff and the Eagles’ Carson Wentz comprised the top two picks of the draft, but it was Cowboys fourth-round signal-caller Dak Prescott, the 135th overall choice, who ultimately emerged as the NFL Offensive Rookie of the Year and the face of a 13-3 team.

When the Cowboys drafted Prescott, there was little expectation he’d garner significant playing time right away, let alone thrive from the get-go, with Tony Romo on the roster. But debilitating summer injuries to Romo and backup Kellen Moore opened the door for Prescott, who’s now firmly entrenched under center in Dallas. Romo, realizing he wasn’t going to start again for the Cowboys, is now working for CBS. 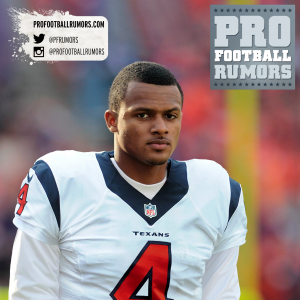 While it’s hard to imagine any rookie quarterback from this year’s 10-man class bursting on the scene in Prescott-like fashion, it stands to reason at least some will get opportunities to do so. Like last year, three passers went in the first round of the 2017 draft, though immediate playing time isn’t a guarantee for any. For now, Mitch Trubisky (No. 2 overall, Bears), Patrick Mahomes (No. 10, Chiefs) and Deshaun Watson (No. 12, Texans) are in understudy roles.

Trubisky, a one-year starter at North Carolina for whom Chicago somewhat controversially traded up a spot to select, reportedly won’t see the field as a rookie unless free agent investment Mike Glennon flops. Considering Glennon previously held a starting job in Tampa Bay but didn’t do enough to keep it, he very well could struggle enough for Trubisky to grab the reins in 2017.

Watson might also take the helm sooner than later, as the ex-Clemson national championship winner whom the Texans traded up 13 spots to draft is behind a veteran, Tom Savage, who’s almost completely untested. Given that the Texans have sullied quality rosters with subpar quarterbacks in recent seasons, it could behoove them to plug in Watson if Savage, he of two career starts and zero touchdown passes, looks like another Brock Osweiler this year. 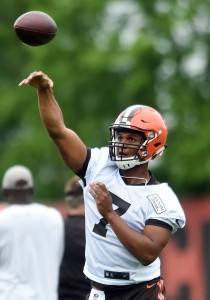 An early path to playing time appears less clear for Mahomes, even though Kansas City paid a high price to go up 17 places to secure him. At the moment, the ex-Texas Tech gunslinger looks like a good bet to red shirt 2017 behind Alex Smith as the Chiefs take at least one more kick at the Super Bowl can with the steady (albeit non-elite) veteran at the helm.

Perhaps more than any other QB in this year’s class, Browns second-rounder DeShone Kizer stands out as someone who looks destined to amass playing time as a rookie. The 52nd pick and former Notre Dame dual threat has impressed in the very early going in Cleveland. Moreover, his main competitors for the Browns’ open starting job, Osweiler and Cody Kessler, aren’t exactly Otto Graham and Bernie Kosar.

As Prescott and 2012 third-rounder Russell Wilson have shown in the past half-decade, a quarterback doesn’t necessarily have to come off the board at the top of the draft to star right away. That’s surely heartening to the Giants’ Davis Webb (third round, No. 87), the 49ers’ C.J. Beathard (third round, No. 104), the Steelers’ Joshua Dobbs (fourth round, No. 135), the Bills’ Nathan Peterman (fifth round, No. 171), the Lions’ Brad Kaaya (sixth round, No. 215) and the Broncos’ Chad Kelly (seventh round, No. 253). Barring injuries, though, Webb, Dobbs and Kaaya have virtually no chance to earn starting roles at any point in 2017, as each is behind an established veteran. On the other hand, there’s no Eli Manning, Ben Roethlisberger or Matthew Stafford on any of the rosters of the 49ers, Bills and Broncos, which could give Beathard, Peterman and Kelly a glimmer of hope. Still, for various reasons, all three look like major long shots to break out as rookies. Then again, the same could’ve been said about Prescott 12 months ago.

Joshua Dobbs and the Steelers agreed to terms on the quarterback’s four-year rookie contract on Monday. The fourth-round pick out of Tennessee is the sixth of Pittsburgh’s eight draft picks to sign.

Only first-rounder T.J. Watt and third-round cornerback Cameron Sutton, Dobbs’ teammate while at Tennessee, are unsigned. Dobbs will begin learning behind Ben Roethlisberger, who is under contract for three more seasons. Although, Roethlisberger said the retirement talk many didn’t consider serious was, in fact, real. Dobbs and Landry Jones comprise the Steelers’ backup sect.

Dobbs was rumored to be coveted by the Browns, Seahawks and Vikings. The 22-year-old started two full seasons for the Volunteers, with his finest work coming in 2016. He led the team to a 9-4 record, a bowl win and threw 27 touchdown passes compared to just 12 interceptions.

Of all the quarterbacks in this year’s draft, Iowa’s C.J. Beathard was the only one 49ers head coach Kyle Shanahan had interest in selecting, details Peter King of The MMQB. Shanahan ultimately got his man toward the end of the third round, pick No. 104, after the 49ers sent the 109th and 219th choices to Minnesota to trade up. “We’d all sleep a little better if we got him instead of waiting ’til tomorrow,” CEO Jed York told other members of the 49ers’ draft room before they moved up for Beathard. Shanahan compares Beathard to a former pupil, Redskins quarterback Kirk Cousins, noting that Beathard “processes the game so well” and is “tough as sh–.”

The Bengals did not receive any calls about trading down from their No. 9 overall pick, according to coach Marvin Lewis.

“Nobody was interested when we were on the clock,” Lewis said (via Paul Dehner Jr. of the Cincinnati Enquirer).

With the pick, the Bengals surprised most pundits by selecting speedy Washington wide receiver John Ross.

Stanford running back Christian McCaffrey, whose stock is so high that he could be a top 10 pick in this year’s draft, will visit the Redskins and Broncos, reports Ian Rapoport of NFL.com (via Chase Goodbread of NFL.com). Given where they’re slated to select (Washington’s at No. 17, Denver’s 20th), those two teams could have difficulty reeling in McCaffrey, though it would make for an especially interesting story if he ended up with the Broncos. His father, Ed McCaffrey, was a standout receiver in Denver from 1995-2003. While there, he caught passes from quarterback John Elway, who’s now the Broncos’ general manager.