Antonio Brown will soon be battling the Raiders off the field. ESPN’s Jeremy Fowler tweets that the wideout’s grievance against the organization will be heard by an arbitrator in May. Brown filed a grievance over lost wages, including more than $30MM in guaranteed money.

Meanwhile, his grievance against the Patriots has yet to be scheduled, according to Fowler. Brown would be looking to recoup some of his $9MM signing bonus.

NOV. 25: The Cowboys will not fire Garrett or make any immediate changes to his staff, per Werder (via Twitter). Werder reminds us that OL coach Paul Alexander was fired during the team’s bye week in 2018, so there is precedent there, but Garrett, O’Quinn, et al. are safe for now (Twitter link).

NOV. 24: Earlier on Sunday, a report emerged suggesting current Cowboys head coach Jason Garrett could be the next head coach of the rival Giants. New York has struggled under Pat Shurmur and there appeared to be mutual interest between Garrett and the Giants. One thing that remains unclear is whether Garrett will be available. While he has been on the hot seat for much of the season, it would not be the first time public perceptions of Garrett’s job status were incorrect. 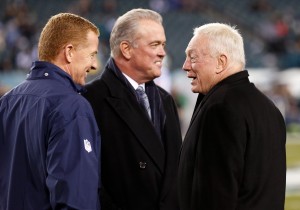 At least publicly, Cowboys owner Jerry Jones has remained supportive and confident in Garrett — until now. After Dallas’ 13-9 loss to the Patriots, Jones was very critical of his coaching staff, according to Mike Fisher of 105.3 The Fan. The most critical commentary focused on the special teams unit, which had a number of crucial mishaps against New England. That does fall under Garrett’s supervision, but likely has larger ramifications for special teams ccoordinator Keith O’Quinn.

With that said, some of Jones’ criticism seemed like a more direct indictment of Garrett as well. “When we run up against an opponent that gets it together, we have a tough time coordinating how we put our offense and defense out there and have them playing [well] at the same time,” Jones said. The owner went as far to say that they had been “outcoached” and lacked “coaching fundamentals.”

Fisher had speculated earlier in the day that the rumors connecting Garrett to the Giants could have been an attempt from Garrett’s side to pressure Jones into an extension. However, Fisher opined for Sports Illustrated that could backfire and cause the owner to lose patience with Garrett even quicker than he would otherwise. The shift in Jones’ public discussion lends credence to that argument.

Indeed, Ed Werder of ESPN.com calls Jones’ comments with respect to Garrett his most damning review of Garrett’s work (Twitter link). Werder also speculates (via Twitter) that the Cowboys may have to win all of their remaining regular season games and at least two playoff games for Jones to retain Garrett.

Speaking to the media today, Cowboys owner Jerry Jones said he intends on wide receiver Dez Bryant being part of the club’s roster in 2018, but wouldn’t comment on a possible pay cut for the mercurial pass-catcher, according to Brandon George of the Dallas Morning News (Twitter link). Bryant will turn 30 years old during the 2018 campaign, and is coming off a disappointing season in which he managed only 69 receptions, 838 yards, and six touchdowns, the third straight campaign in which Bryant has failed to top 1,000 yards receiving. He’s due a base salary of $12.5MM next year, so while Jones refused to touch the subject of a pay reduction, the topic figures to come up this offseason.