The Eagles are back down to two quarterbacks on their offseason roster. They waived rookie UDFA Jamie Newman on Wednesday. They also waived wide receivers Khalil Tate and Trevon Grimes, cutting the latter with an injury designation. 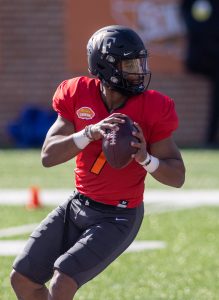 Newman agreed to terms with the Eagles minutes after the draft concluded, but the team appears to have determined the former Wake Forest quarterback is not ready to compete for a roster spot. This transaction leaves Jalen Hurts and Joe Flacco as Philly’s QBs. It would seemingly put the Eagles on the hunt for another developmental/third-string passer.

A 6-foot-4 passer, Newman transferred from Wake Forest to Georgia but did not end up playing for the Bulldogs after opting out of last season. He worked as the Demon Deacons’ starter in 2019, throwing 26 touchdown passes and averaging 7.9 yards per attempt. Newman participated in the Senior Bowl, being one of the 2021 showcase’s two QBs — along with Falcons UDFA Feleipe Franks — to go undrafted. Scouts Inc. graded Newman 184th among this year’s prospects. Despite the sixth-round grade, Newman is on the waiver wire.

After changing coaching staffs, the Eagles switched up their QB depth chart. Carson Wentz and Nate Sudfeld, teammates for the past four seasons, are elsewhere now. Hurts, viewed as a developmental player coming out of Oklahoma in 2020, is on track to start this season. On his fourth team in four years, Flacco is in position to back him up. Ahead of training camp, the Eagles will likely add a third player to this equation.

Here are Monday’s minor moves, coming out of Pennsylvania.