A potential Tom Brady successor is officially under contract. The Buccaneers have inked second-round pick Kyle Trask to his rookie deal, Rick Stroud of the Tampa Bay Times tweets. 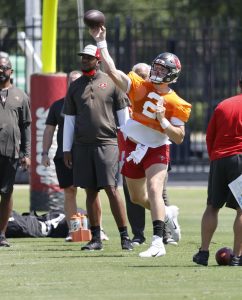 It’s a four-year pact worth $5.535MM with a signing bonus of $1.385MM for the Florida product. The move comes right as the Bucs are starting their mandatory minicamp. It’s a welcome development for the most recent 64th pick, as he’ll need to focus on all the practice time he can get as a backup quarterback not likely to see the regular season field anytime soon.

Trask had an unusual path to the pros, as he didn’t start a game in high school after his freshman year while backing up eventual Houston and Miami star D’Eriq King. Trask was recruited by Florida nonetheless, and became the starter in his junior year in 2019 after an injury to Feleipe Franks.

Trask thrived under Dan Mullen, and became a Heisman contender in 2020. He set numerous records for the Gators, throwing for 43 touchdowns in 12 games.

In the early draft process there was some buzz he could sneak into the first-round, but he ultimately almost slipped to the third until Tampa nabbed him with the last pick of the second. The Buccaneers also have Blaine Gabbert and Ryan Griffin on the roster behind Brady, who are likely competing for one backup spot next to Trask.

With the No. 64 overall pick, the Buccaneers selected Florida quarterback Kyle Trask. Trask will now get to learn from the best as he backstops Tom Brady.

The Florida quarterback broke onto the scene in 2019 and elevated his game further in 2020. Trask ultimately finished 2020 with a 68.9-percent completion rate, 4,283 yards, and 43 touchdowns against just eight interceptions. Meanwhile, per the metrics at Pro Football Focus, Trask was the only college QB to throw for 10+ TDs with zero turnovers on deep balls.

Many pegged Trask as the best quarterback outside of this year’s top tier. Only Trevor Lawrence, Justin Fields, Zach Wilson, Mac Jones, and Trey Lance were regarded as qualified first-rounders, but Trask’s game management skills had him ranked fairly high on most boards. In addition to the Bucs, the rival Saints were also said to be eyeing him.

While it’s been assumed that one of Taysom Hill or Jameis Winston will emerge as Drew Brees‘ heir apparent in New Orleans, it sounds like the organization could end up pivoting to the draft to find their future quarterback. During an appearance on SportsCenter, ESPN’s Jeremy Fowler said the Saints are a “sneaky contender to get a quarterback” after the first round, with Fowler pointing to Florida’s Kyle Trask as a main target (video link).

Fowler adds that there was plenty of buzz during Florida’s Pro Day that the Saints could be eyeing the Heisman Trophy finalist. If the team does end up opting for Trask (or another quarterback), Fowler opines that the player probably wouldn’t see the field much as a rookie. However, that QB would likely be in a position to take on the starting gig in 2021, especially if the team uses a second- or third-round pick on the player.

If New Orleans is indeed seeking a rookie quarterback, Trask would make sense. For starters, the Saints will presumably miss out on the grouping of Trevor Lawrence, Justin Fields, Zach Wilson, Mac Jones and Trey Lance, so there’s some merit to staying patient and seeing how far the second-tier QBs fall. After their first-round pick (No. 28), the Saints are armed with a second (No. 60) and two thirds (No. 98, No. 105); the team may need to trade up in the second round if they truly have their eye on Trask.

The Florida quarterback broke onto the scene in 2019, and he followed that up with a standout campaign in 2020. Trask ultimately finished this past season having connected on 68.9-percent of his passes for 4,283 yards, 43 touchdowns, and eight interceptions.

The Saints made sure to retain Winston via one-year, $12MM deal (including $5.5MM guaranteed) earlier this offseason. Hill will also be playing the 2021 campaign on a one-year, $12MM deal (despite the funky restructuring by the organization last month). Hill got eight starts filling in for an injured Brees in 2020, while Winston was limited to only 11 attempts in four games (although he tossed a 56-yard touchdown during the postseason).