Marshal Yanda‘s season is over. The guard fractured his leg in Sunday’s win over the Browns, as Jeff Zrebiec of The Baltimore Sun tweets. He’ll be placed on IR with no hope of returning in 2017. 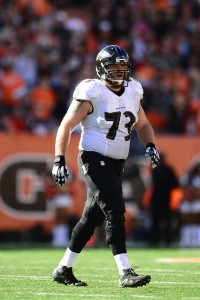 The Ravens have been plagued by injuries for months, particularly on the offensive line. Tony Bergstrom was plugged in at the right guard spot after Yanda exited and that’s where he could remain for the rest of the season, unless the Ravens add a better interior lineman to the mix.

Yanda missed three games in 2016 due to a nagging shoulder injury. Despite the ailment, the 33-year-old graded out as the NFL’s best guard.

“There’s not a word in English dictionary to describe what Yanda is to us,” one player said to Zrebiec (Twitter link).

The Ravens have also lost linebacker Bam Bradley for the season thanks to a torn ACL.