Jets assistant coach Greg Knapp has passed away. His agent, Jeff Sperbeck, announced the tragic news this evening (per Mike Klis of 9News in Denver on Twitter).

We learned earlier this week that Knapp was battling life-threatening injuries after being involved in a bicycle accident. The 58-year-old was riding his bike when he was struck by a motorist in California. Knapp never regained consciousness following the accident. According to an ESPN report, the driver of the vehicle was cooperating with police, and drugs and/or alcohol were not believed to be a factor.

Knapp had served as a coach for more than three decades. After spending nine years at Sacramento State, Knapp made his way to the NFL. He served as offensive coordinator for a number of teams, including the 49ers, Falcons, Raiders, and Seahawks. He spent the past few years serving as a QB coach for the Texans, Raiders, Broncos, and Falcons, and he was hired by the Jets to be the pass-game specialist earlier this offseason. Per Sperbeck, Knapp worked with a long list of quarterbacks throughout his career, including Steve Young, Jeff Garcia, Rick Mirer, Matt Schaub, Michael Vick, Peyton Manning, Matt Ryan, and (most recently) Zach Wilson.

“Greg is such an amazing individual it is hard to imagine the challenge facing him and his family,” Jets coach Robert Saleh said earlier this week (via ESPN). “Greg’s fun nature, kind disposition, and wealth of knowledge has allowed him to make genuine connections with all of our coaches, players and staff since he has been here.”

We here at PFR would like to extend our condolences to Knapp’s family, friends, and colleagues.

Robert Saleh is the Jets’ new head coach, and he’s taking his SF friends with him. 49ers passing game coordinator Mike LaFleur will serve as his new offensive coordinator, as Mike Silver of NFL.com tweets. Furthermore, Niners offensive line coach John Benton will take on the same job with the Jets while also managing the run game. 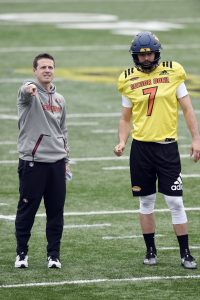 Saleh will also hire at least two more Niners offensive assistants — Greg Knapp has been tapped as the QB coach while Rob Calabrese will be the pass game specialist for Gang Green.

There were seven vacancies in this cycle, and six of those teams requested interviews with Saleh. The Jets came away with the 41-year-old, who is regarded as one of the league’s sharpest defensive minds. Under Saleh’s watch, the 49ers surrendered just 169.2 passing yards per contest in 2019. And, this past year, his unit had the fifth lowest total in total yards surrendered.

The Jets gave Saleh the freedom to build his own staff, something that they were reluctant to do for certain candidates in their last search. For LaFleur, it’s a chance to spread his wings — he’s been with Shanahan since 2014, dating back to his internship with the Browns.

The Falcons were set to add Darrell Bevell and Ken Dorsey to their quarterbacks coach interview list, but they might not have gotten around to it by the time they arrived at their decision. Greg Knapp will replace Bush Hamdan as Atlanta’s QBs coach, Alex Marvez of Sporting News reports. The 54-year-old Knapp did not coach in the NFL last season and spent the previous four years coaching the Broncos’ quarterbacks.

Knapp will return to Atlanta in a different capacity; he was the Falcons’ offensive coordinator from 2004-06. Running the most successful of the Michael Vick offenses, Knapp also was OC with the 49ers, Raiders (two stints) and Seahawks. The one-season stay in Seattle (2009) overlapped with Dan Quinn, who was the Seahawks’ defensive line coach from 2009-10. Knapp’s Broncos work may look a bit better now considering how far their quarterback play fell this season, and the Falcons are hoping he can help return Matt Ryan to top-tier status after a down year.