On Monday,The Spring League announced the signing of former Baylor defensive lineman Shawn Oakman. Oakman, who went undrafted in 2016 due to sexual assault charges, will suit up for the Austin Generals in his bid to make the NFL ranks. 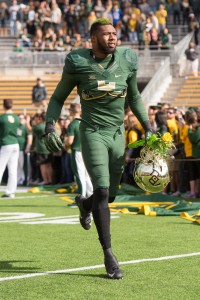 Oakman’s physical tools once positioned him as one of the top prospects in the country. In 2014, Oakman registered 25.5 tackles for a loss, 11 sacks, and four forced fumbles. His 2015 campaign wasn’t as impressive (4.5 sacks, 14.5 TFL, two forced fumbles), but he was truly undone by a troubling incident that took place just weeks before the draft.

Recently, however, Oakman was acquitted of the charges against him. With The Spring League, he’ll have an opportunity to prove he’s on the right track and demonstrate that he still possesses explosive size, speed, and power.

Once considered to be a top NFL prospect, Shawn Oakman now has larger matters on his plate than a career in football. The former Baylor star has been indicted on sexual assault charges by a Waco, Texas grand jury, as Rissa Shaw of KCEN writes. 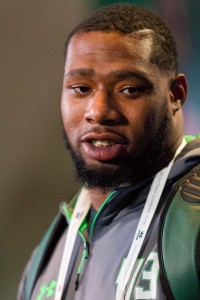 Oakman was arrested in April for allegedly raping a female Baylor student. The incident happened just a couple of weeks before the NFL Draft, leading all 32 teams to steer clear of the defensive end. Oakman maintains that his contact with the accuser was consensual.

Even before the alleged assault, Oakman’s draft stock wasn’t terribly high. Oakman turned heads in 2014 when he led Baylor with 11 sacks (a school record) and recorded 19.5 tackles for loss in 13 games. However, he only racked up 4.5 sacks in 2015 as a senior and started his year off with a suspension. When the news broke, Oakman went from being a late Day 2/Day 3 prospect to off-the-board for most teams. It also didn’t help that a police report from 2013 emerged in which an ex-girlfriend alleged that she was physically abused during an argument.

The muscle-bound 6-foot-8, 287-pound defensive end was named a third-team All-American in 2015, despite his so-so season.

Florida State kicker Roberto Aguayo could wind up as a Day 2 pick thanks to the recent rule changes to extra points and kickoffs, Matt Baker of the Tampa Bay Times writes. Aguayo, who opted to go pro a year early, left FSU as the most accurate kicker in NCAA history. There has not been a kicker taken in the first three rounds since Mike Nugent in 2005 (second round choice of the Jets), but Aguayo could change that.

Texas Tech offensive tackle Le’Raven Clark had 10 visits and 12 private workouts for teams in recent weeks, and has two more workouts this week with teams that pick in the back half of the first round, tweets Ian Rapoport of NFL.com. While Rapoport sounds bullish on Clark’s draft stock, I think the former Red Raider is more likely to come off the board late in the second round than late in the first.

Here are a few more Saturday odds and ends from across the NFL:

Baylor’s Shawn Oakman was arrested on sexual assault charges stemming from an incident on April 3rd, as Tommy Witherspoon of The Waco Tribune writes. The woman went to the hospital after the alleged early Sunday morning assault and was examined by a sexual assault nurse examiner, according to court records. Oakman, meanwhile, maintains that their contact was consensual.

Oakman turned heads in 2014 when he led Baylor with 11 sacks (a school record) and recorded 19.5 tackles for loss in 13 games. However, he only racked up 4.5 sacks in 2015 as a senior and started his year off with a suspension, so his stock was already trending downward for April’s draft. This week’s arrest could knock him down to the last rounds of the draft if the allegations are accurate.

James Walker of ESPN.com previewed the Dolphins‘ 2015 offensive free agents, a group that includes tight end Charles Clay, guard Daryn Colledge, center Samson Satele, and running backs Knowshon Moreno and Daniel Thomas. It’s an interesting group, Walker writes, because most of these players were contributors or expected contributors until injuries shortened the season. Clay appeared to be in store for a big payday this offseason, but that no longer appears to be the case. More from around the NFL..