Now, the experienced scouting exec will latch on with an Alliance of American Football Franchise. The 33-year-old Brown will be part of the AAF’s Birmingham franchise, serving in its front office, Alex Marvez of the Sporting News reports (on Twitter). 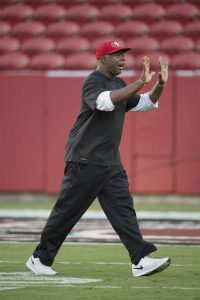 Brown spent eight seasons as an NFL scout/exec, breaking into the league with the Patriots in 2010 and spending five years with the Eagles. He earned multiple promotions, one involving a climb to the post of Eagles director of college scouting in 2016, and was viewed as a rising star in the executive ranks. This led to the Bills interviewing him for the GM job that went to Brandon Beane.

Lewis interviewed to become the Redskins’ secondary coach in 2017 and the Cowboys’ DBs boss in 2016. The 56-year-old coach spent nine seasons on Bill Cowher‘s staffs from 1995-03 and was Tom Coughlin‘s first DC with the Giants.

The Chargers’ HC from 1999-01, Riley just recently accepted a job as an assistant head coach at Oregon State. He served as the Beavers’ HC from 2003-14 before serving as Nebraska’s head coach for three seasons. His last NFL gig came as a Saints assistant in 2002. Pendry’s previous pro coaching gig came as Texans offensive line coach in the 2000s.

The Redskins have interviewed Chargers assistant defensive backs coach Chris Harris and longtime NFL coach Tim Lewis for their vacant secondary coach position, according to Mike Jones of the Washington Post. Alex Marvez of SiriusXM NFL Radio (Twitter link) reported last month that new Los Angeles head coach Anthony Lynn would retain Harris and several other defensive coaches, but the Chargers may simply be allowing Harris — whom Jones says is considered a “rising star” — to pursue a promotion. Lewis, meanwhile, has experience as a coordinator, and has spent time with the Steelers, Giants, Panthers, Seahawks, Falcons, and, most recently, the 49ers.

Earlier today, we heard that the Cowboys were set to talk to former 49ers head coach Mike Nolan about their defensive backs coach position, but Nolan isn’t the only candidate for the opening. According to Clarence Hill of the Fort Worth Star-Telegram (via Twitter), the Cowboys will also interview Tim Lewis, lost his job as the Niners’ defensive backs coach last month.

Alex Marvez of FOX Sports adds a few more names to the Cowboys’ list of possible targets, tweeting that the team has already interviewed Titans assistant secondary coach Steve Brown, former Colts assistant Mike Gillhamer, and former Miami Hurricanes head coach Al Golden, who has since been hired by the Lions. Even with Golden off the table, it certainly seems that Dallas has no shortage of candidates to replace Jerome Henderson.

Here are a few more items of interest from around the NFL’s two East divisions: 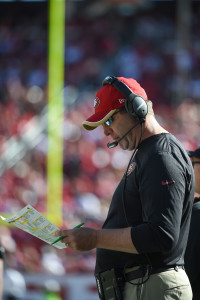