Cowboys rookie Trevon Diggs might be done for the year. The cornerback suffered a late-game foot fracture on Sunday that will require at least 4-6 weeks to recover. The Cowboys will place Diggs on injured reserve, which keeps players sidelined for a minimum of three weeks. 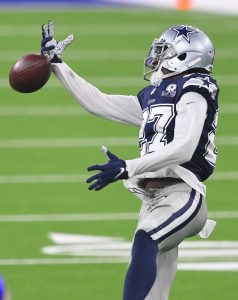 Now that we’re past the midpoint of the season, it will be tough for Diggs to return before its all over. The Cowboys won’t have much incentive to rush him back either. After falling 24-19 to the Steelers, the Cowboys are now 2-7 with little hope of reaching the postseason.

“I don’t know the prognosis in terms of long he’ll be out,” said owner Jerry Jones on Tuesday morning (via the team website). “I do know that he’s got the issue with his foot – again, I do not know the ultimate length of time that he’ll be out.”

Diggs, the No. 51 pick in this year’s draft, has been solid as of late. Unfortunately, he’ll have to put things on pause as he joins the Cowboys’ walking wounded. On offense alone, that list includes quarterback Dak Prescott, left tackle Tyron Smith, right tackle La’el Collins, and tight end Blake Jarwin.

Cowboys starting cornerback Chidobe Awuzie will miss multiple games with a hamstring injury, per a club announcement. Awuzie has not been placed on injured reserve, but that would be the logical move if he’s sidelined for three or more games. 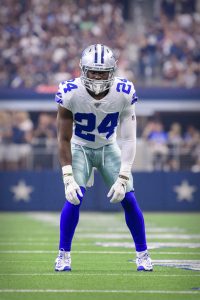 Awuzie went down late in the Cowboys’ win over the Falcons, adding another name to the team’s already lengthy injury list. Already, the Cowboys have cornerback Anthony Brown and linebackers Leighton Vander Esch and Sean Lee on IR. Brown hit the IR list just as fellow corner Jourdan Lewis returned to action and Awuzie’s absence marks yet another hit to the secondary.

In the interim, the Cowboys will likely turn to recent call-up Brandon Carr for support at corner. Ideally, the Cowboys wanted the veteran at safety, where he backed Darian Thompson and Daryl Worley.

On the plus side, rookie cornerback Trevon Diggs returned to the practice field after missing some time with a shoulder injury. They’ll need the Alabama product more than ever given the Cowboys’ injuries on the defensive side of the ball.

A player mentioned as a possible first-rounder will head to Dallas. Trevon Diggs went off the board to the Cowboys at No. 51, potentially filling a big need area for the team.

The younger brother of Stefon Diggs, Trevon would appear to be Dallas’ top offseason effort to replace Byron Jones.

Trevon Diggs did not post big stats while at Alabama — only accumulating 68 tackles in four seasons — but the 6-foot-1 talent was viewed as one of this draft’s top prospects nonetheless.

The Cowboys return rookie-contract corners Chidobe Awuzie and Jourdan Lewis, and Diggs should be expected to challenge for a starting spot as a rookie. Both Awuzie and Lewis are entering contract years, making it all the more important for Dallas to stock up at corner.

D’Andre Swift would be in the running to be the first running back taken in the 2020 draft, and a report surfaced Tuesday indicating the junior Georgia back will leave school early. But Swift, taking to Twitter, denied that report and indicated he has yet to make a decision. Swift said he will not decide his draft status until after the Bulldogs’ Sugar Bowl game. The modern norm has been for running backs to declare early to conserve mileage for the NFL, so it remains a good bet Swift will try to become a first-round pick rather than return to Athens next season. Swift has rushed for a career-high 1,216 yards this season and has averaged north of six yards per carry in each of his three years. Recent Georgia ball-carriers Todd Gurley and Sony Michel were first-round picks; Todd McShay’s initial 2020 mock draft has Swift going 21st overall.