This NFL offseason should have one of the busiest quarterback carousels in recent memory. This April’s draft class is widely regarded as being light on day one starters, and as such at least a handful of teams will be in the market for veteran starters. Vets like Joe Flacco, Ryan Tannehill, and Nick Foles will all be on new teams whether through trades or free agency. Jason La Canfora of CBS Sports took the time to break down the quarterback situation for nearly every team in the league, examining the situation of every team that will be in the market for either a new starter or a new backup.

The whole piece is worth a read, and among the most notable predictions is Foles landing with the Jaguars. La Canfora writes that “it is clear the Jags are clinging to winning now”, and he thinks they’ll pursue either Foles or Flacco. He also projects Kyler Murray to the Dolphins, Dwayne Haskins to the Giants, and Ryan Fitzpatrick to the Packers as insurance given Aaron Rodgers‘ recent injury history.

Here’s more from around the league, with an eye on the offseason:

A potential comeback for Vince Young encountered a significant obstacle. The former NFL offensive rookie of the year and Heisman Trophy winner saw the CFL’s Saskatchewan Roughriders waive him on Saturday, Adam Schefter of ESPN.com reports (on Twitter). 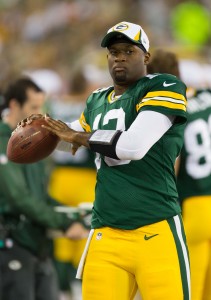 Young tore his hamstring during Roughriders training camp on June 6, and the 34-year-old is once again without a team, agent Leigh Steinberg told Schefter. Young was vying with CFL veteran Kevin Glenn and former North Carolina quarterback Marquise Williams, who started over Mitch Trubisky for two years, with the Roughriders. Young signed a nonguaranteed two-year contract, making a separation easier for Saskatchewan.

The former Titans starter and Texas superstar has not played in an NFL regular-season game since 2011. He saw multiple opportunities in subsequent preseasons but did not stick. The Browns cut him in 2014, and the Packers and Bills, respectively, parted ways with Young after taking him to camp in the two previous seasons.

Young announced his retirement in 2014 but was attempting a comeback with the CFL franchise. This injury is expected to keep him out for more than a month. The CFL regular season starts June 22.

Former Lions wide receiver Calvin Johnson has been observing Raiders practices this week as a guest of offensive coordinator Todd Downing, per Eddie Paskal of Raiders.com. Downing was on Detroit’s staff from 2009-13 – a large portion of Johnson’s career – and while it’s fun to imagine Megatron coming out of retirement to join the Raiders’ high-octane attack, there’s no indication he has any interest in doing so.

While former NFL quarterback Vince Young would like to return to the sport’s top league, it appears he’ll have to settle for a job up north. Young’s agent, Leigh Steinberg, is in discussions with the Saskatchewan Roughriders of the Canadian Football League, and it appears he could sign sometime in the next week, according to Dan Ralph of the Canadian Press (via the CFL’s website).

Young, who will turn 34 in May, hasn’t attempted a professional pass since he was a member of the Eagles in 2011. That didn’t go well for Young, who put up four touchdowns against nine interceptions in six appearances (three starts). He then signed one-year deals with the Bills, Packers and Browns in each of the next three years, but he wasn’t able to catch on with any of them. Young retired in 2014, though he has since made multiple attempts to return to the NFL.

A former star at Texas, where he won a national championship, Young spent the majority of his NFL tenure with the Titans, who chose him third overall in 2006. Even though he won a Rookie of the Year and earned two Pro Bowl nods in Tennessee from 2006-10, Young underwhelmed as a passer with the club. In 54 games (47 starts) as a Titan, he completed 57.9 percent of his throws, tossed as many touchdowns as interceptions (42) and averaged just 150 aerial yards per game. The mobile Young did post a strong 5.2 yards-per-carry mark and pick up 12 rushing TDs on 282 attempts as a Titan, though, and the team managed to go 30-17 in his starts.

Here’s the latest from around the league as teams continue to prepare their free agency plans and Combine itineraries. We’ll begin with a player who’s interested in another NFL comeback.

As Michael David Smith of Pro Football Talk notes, the word “dream” seems to be the operative word in Steinberg’s tweet, especially given that Young hasn’t attempted an NFL pass since the 2011 season. That’s not meant to sound callous, but instead represents just how difficult it will be for the now 33-year-old Young to return to the NFL

Young, a former third overall selection, signed with the Eagles in 2011 after five seasons in Tennessee, and managed to complete 63 passes for Philadelphia during his one season with the club. Over the next three years, Young had short-lived offseason stints on the Bills, Packers, and Browns rosters, but never made it to the regular season with any team.

After formally announcing his retirement nearly three years ago, Young attempted to attend the NFL’s veteran combine in 2015, but was rejected. Earlier this year, the nascent Spring League invited Young and other former NFL players to join its emerging ranks, as Mike Florio of Pro Football Talk reported at the time.

As we learned earlier today, the Jets aren’t giving up on Brian Hoyer despite reports of the quarterback agreeing to a deal with the Texans. Per Mike Florio of Pro Football Talk, the Jets spoke with Hoyer’s agent twice Monday, and were set to do so again Monday night.

The NFL will hold its first-ever combine for veteran players March 22 in Tempe, Ariz. Like the scouting combine, which takes place every February and is designed for teams to observe draft prospects, the veteran edition will include position drills and physical tests. At least two household names will be among the 100 invitees participating at the combine. Quarterback Vince Young and defensive end Michael Sam will be in attendance, according to Ian Rapoport of NFL.com and ESPN’s Adam Schefter, respectively.

Young, whom the Titans chose third overall in the 2006 draft, last appeared in an NFL game in 2011 as a member of the Eagles. The one-time Heisman Trophy winner from the University of Texas announced his retirement last June after a disappointing career that included stints with five different organizations. The 31-year-old Young has had a change of heart, though, and will try to return to the league. His attempt at blazing a comeback trail will begin at the combine.

One of the players joining Young will be Sam, 25, the ex-University of Missouri star who has made headlines since last year as the first openly gay player drafted into the NFL. The seventh-round pick of the Rams last April hasn’t yet appeared in an NFL game and hasn’t been a member of a team since the Cowboys released him from their practice squad in October. Although Tom Pelissero of USA Today reported earlier this month that Sam has a one-year contract offer on the table from the CFL’s Montreal Alouettes, Sam wrote last week on MMQB.com that, despite ups and downs, he has “remained focused on getting back on an NFL roster.”

Elsewhere around the league…

We heard a couple months ago that Ed Reed was still hoping to play in the NFL in 2014, but the chances of that happening look slimmer today, after Showtime and CBS announced that the former Ravens safety will join Inside the NFL for the coming season. Bears wideout Brandon Marshall is also a new addition to the show, so Reed’s inclusion doesn’t necessarily rule out his return to the field, but CBS Sports chairman Sean McManus referred in a statement to “Ed just coming off the playing field and Brandon still on it.”

As Jeff Zrebiec of the Baltimore Sun tweets, Reed said today that he may “never” officially announce his retirement, so while we shouldn’t close the book on his career quite yet, it’s possible we’ve seen the veteran take the field for the last time.

It appears as if Vince Young‘s career as a National Football League quarterback is over.

According to Brent Carney of kxan.com, the former Texas Longhorn who spent his first five years with the Titans has called it quits.

“It’s definitely official I think in my book,” Young said. “Unless we get a great opportunity, something guaranteed … other than that I’ve started moving forward in some things.

“I love the NFL, will love the game always but I’m kind of moving forward and moving on right now.”

Young signed with the Browns in early May, but was released less than two weeks later following the team’s minicamp. He went to training camp with the Packers in 2013 and Bills in 2012, but was released by each team prior to the start of the regular season. His last significant on-field action came in 2011 with the Eagles, starting three games and totaling four touchdowns and nine interceptions.