The Saints might need a new kicker. Wil Lutz has aggravated a groin injury that may require surgery (Twitter link via NFL.com’s Ian Rapoport).

Lutz, 27, is attached to a five-year, $20.25MM extension he signed in March 2019. At the time of signing, that made him the highest-paid kicker in NFL history. He rewarded the team’s confidence early on in that deal, earning a Pro Bowl nod in 2019. The Saints have him under club control through 2023.

Lutz has made 86.6% of his field goal tries across his five-year career, positioning him as one of the best kickers in the game. He’s also made 253 out of 260 extra point attempts in the elongated XP era.

The Saints continue to methodically move down toward the NFL’s projected salary cap. While they have a long way to go, the team made another move Friday afternoon on the path toward cap compliance ahead of the 2021 league year.

New Orleans will restructure Wil Lutz‘s contract, per Ian Rapoport of NFL.com (on Twitter). This move will create $1.74MM in cap space for the team. Lutz is attached to a five-year, $20.25MM extension he signed in March 2019. The five-year Saints kicker is signed through the 2023 season.

Many more moves will be required over the next week and change. The Saints entered Friday just more than $60MM over the $180MM mark that represents the floor for the 2021 salary cap. They have begun doing work to clear space, though the lion’s share of this process has yet to transpire.

The Saints released veterans Thomas Morstead and Josh Hill this week and restructured David Onyemata‘s contract. Along with Friday’s Lutz restructure, this work week’s round of moves created upwards of $11MM in cap space. The team still has the most work to do on the cap front of any NFL team as the 2020 league year winds down.

Saints kicker Wil Lutz has inked a new five-year deal with the team, according to a team press release. Lutz was a restricted free agent, but he’s now signed through the 2023 campaign.

The total value of Lutz’s new five-year deal will make him the highest-paid kicker in NFL history, ESPN.com’s Mike Triplett tweets. Full terms of the deal are not yet known, but, for reference, the league’s top kickers make north of $4MM per year.

Lutz originally signed with the Ravens as a UDFA in 2016, but he never had a chance to beat out Justin Tucker and was cut before camp. One week later, he hooked on with the Saints and became their go-to guy.

The Saints have signed kicker Patrick Murray, per Ian Rapoport of NFL.com (Twitter link). Rapoport says Murray will compete with incumbent Wil Lutz, but Josh Katzenstein of the Times-Picayune tweets that Lutz has looked great in camp, so New Orleans may have signed Murray simply to allow Lutz to save his leg. Nick Underhill of the New Orleans Advocate, meanwhile, says there is a kicking competition, though he still thinks Lutz is pretty safe (Twitter links). 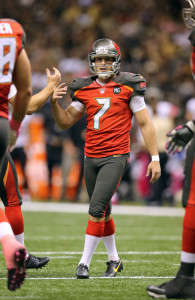 Regardless, Murray is more accomplished than a camp fodder kicker that is often brought in just to spell the presumptive starter before the regular season begins. In 2014, Murray was the Buccaneers’ kicker and converted 20 of 24 field goals. He spent all of 2015 on IR before winning the Browns’ kicking competition last summer. Unfortunately, he played in only two games for Cleveland before landing on IR for the second consecutive year. He made one of his two field goal attempts and three of his four extra point opportunities.

Lutz originally signed with the Ravens as a UDFA last year, but he never had a chance to beat out Justin Tucker and was cut in late August. He caught on with the Saints a week later and spent the entire year as the club’s kicker, connecting on 28 of 34 field goal attempts and 49 of 50 extra points. He was named the NFC Special Teams Player of the Week in Week 6 and Week 8.

Could the Saints be making a change at kicker? One day after agreeing to add kicker Wil Lutz to their taxi squad, the Saints are instead signing him to the 53-man roster, according to agent John Perla Jr. (on Twitter).

Just a few days ago, the Saints cut fellow kicker Connor Barth, which seemingly meant that Forbath had won the kicking competition. The Saints were fond of Barth too and coach Sean Payton acknowledged that the team had a tough time deciding between them. It seems unlikely that the Saints would carry two kickers, so one has to wonder if Forbath could be injured.

Lutz had a tryout with the Saints on Monday, Josh Katzenstein of The Times-Picayune tweets. He made all of his short kicks and while he nailed a few tries from the high 50s, he did miss two attempts from 50+. Lutz was let go by the Ravens when the team cut down to 75. The UDFA out of Georgia State connected on 27 of his 39 field goal tries in college and made 98.1% of his extra point attempts.

The Ravens have announced four roster moves, and have trimmed their roster to the 75-player maximum. As such, Baltimore is done with transactions until this weekend, when all clubs must move to 53 men.

Taliaferro will miss the first six weeks of the season, but can then be activated to the Ravens’ active roster. Kaufusi was Baltimore’s third-round pick this year.

Like a number of other teams around the league, the Ravens made an effort to get plenty of contracts done before their rookie minicamp got underway, securing seven of their 11 draftees, and adding another 11 undrafted free agents to their roster.

In a separate press release on their website, the Ravens also listed their 11-man UDFA class, complete with a scouting report for each player. Here are Baltimore’s UDFA additions: