They’re really starting to fly off the board now. The Browns are expected to sign wide receiver Kenny Britt, Adam Caplan of ESPN.com tweets. Once finalized, Britt’s deal is expected to be a four-year, $32.5MM pact with $17MM guaranteed. 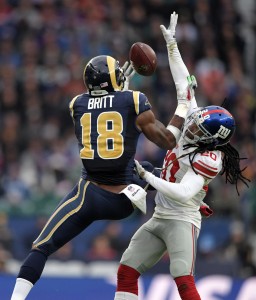 The signing could mean that Terrelle Pryor will end up elsewhere. There was strong mutual interest in a return, but it’s not likely that there is room for both receivers. It’s possible that agent Drew Rosenhaus overplayed his hand, but we won’t know until Pryor lands and his contract terms are made public.

Britt managed to turn in his first career 1,000+ yard campaign in 2016, despite playing in the NFL’s worst offense. A skeptic might wonder why Britt waited until his contract year to break out in this fashion. Before last season, Britt’s previous watermark was 775 yards receiving (in 2010).

I predicted Britt would fetch the fourth-highest deal of any receiver on the open market and also had him as the fourth-best receiver in free agency based on ability. Britt made just a shade over $4MM in 2016, so his new deal represents a significant pay bump.

The 49ers, Cowboys, and Giants were among the teams with Britt on the radar, but he’ll be going to Cleveland instead.