The Rams will not have their primary slot cornerback available for a while. Troy Hill sustained a groin injury during the team’s Week 2 win over the Falcons; the veteran defender is now on IR. 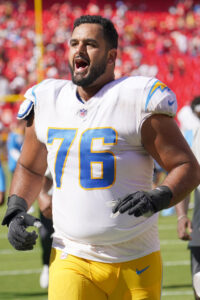 Reacquired via trade on Day 3 of the draft, Hill re-emerged in his old gig in Los Angeles to start the season. Hill, 31, played 95% of the Rams’ defensive snaps in Week 1 but left their Week 2 game early. Cobie Durant replaced Hill, but Sean McVay said a hamstring injury could keep him out against the Cardinals as well. Robert Rochell and sixth-round rookie Derion Kendrick represent the team’s top other options here, should Durant not be able to go.

Anchrum became the latest Rams offensive lineman to go down; McVay confirmed the third-year blocker is out for the season. Anchrum, a 2020 seventh-round pick, suffered a fractured fibula Sunday. The Rams had Anchrum, third-round rookie Logan Bruss and veteran Coleman Shelton competing for the right guard job this summer. None of the three are available for that gig presently. Bruss (ACL, MCL tears) is out for the season; Shelton slid to center to replace Brian Allen, who suffered an injury in Week 1. Allen is not on IR, however. His return would shift Shelton back to right guard.

Second-year UDFA Alaric Jackson stepped in at right guard against the Falcons, but Aboushi is far more experienced. A starter for six teams during a nine-year career, Aboushi has 47 career first-string appearances. The 31-year-old blocker could join an ultra-exclusive club by starting for a seventh team. Considering the Rams’ situation, that may happen soon. Aboushi started five games for the Chargers last season, opening the year as their top right guard. An ACL tear ended that run. It will be interesting to see if the Rams move the veteran into their starting lineup this week, assuming Allen is not ready to return.