10:55am: The Colts have confirmed they’ve waived Newsome, and have also cut veteran linebacker Andy Studebaker, per a team release. Studebaker played primarily on special teams during his time in Indianapolis.

10:35am: Following his arrest last week, linebacker Jonathan Newsome has been cut from the Colts’ roster, tweets Ian Rapoport of NFL.com. Newsome himself suggested in a tweet this morning that his time in Indianapolis had come to an end. 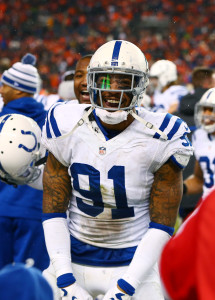 “I would like to thank Coach [Chuck] Pagano, Ryan Grigson, Jim Irsay and the entire Colts organization for the opportunity of a life time,” Newsome wrote.

A fifth-round pick in 2015, Newsome had an impressive rookie season with the Colts, recording 33 tackles, 6.5 sacks, and four forced fumbles. However, the 25-year-old failed to make the same sort of impact in 2015, with his season totals slipping to 18 tackles, one sack, and one forced fumble.

Of course, Newsome’s decrease in production during the 2015 season isn’t what cost him his roster spot. The Ball State alum was arrested early last Wednesday morning on possession of marijuana charges, as Matt Adams of FOX59 detailed at the time. Authorities first came to his home to follow up on a noise complaint and during the investigation, officers found marijuana. Police said Newsome cooperated with authorities as he was taken into custody.

Because he has just two years of NFL experience, Newsome will be subject to waivers, meaning another team could claim him tomorrow, assuming the Colts make his release official today. If Newsome clears waivers, Indianapolis will be on the hook for about $89K in dead money on the 2016 cap.

It wasn’t long ago that veteran guard Todd Herremans was one of the Colts’ more notable signings of the offseason, having been expected to bring some stability to the offensive line. Nine months later, Indianapolis has released Herremans with three weeks left in the regular season, the team announced today in a press release.

Herremans, a former Eagle, signed a one-year, $2.25MM deal with the Colts in March that could be worth up to $3.5MM. However, he lost his starting job in Indianapolis after just two weeks, and was made inactive for multiple games since then. The 33-year-old, who has started 126 games during his 11-year NFL career, will become an unrestricted free agent if and when he clears waivers.

The Titans are down to 65 players, following the team’s latest round of roster cuts. That means that the club will have to make 12 more roster moves in advance of tomorrow afternoon’s deadline in order to get down to 53 players.

Here are the players who were cut by Tennessee today, via a press release:

In addition to cutting those nine players, the Titans also removed a 10th player from their roster by trading veteran guard Andy Levitre to the Falcons earlier in the day. In a piece for TitansOnline.com, Jim Wyatt explained why the team moved on from Levitre.

MONDAY, 10:12am: The Titans have offically signed Studebaker, waiving wide receiver Clyde Gates in the corresponding roster move, according to Jim Wyatt of TitansOnline.com (Twitter link).

SUNDAY, 7:43pm: The Titans and free agent linebacker Andy Studebaker have agreed to a deal, according to Terry McCormick of TitanInsider.com (Twitter link). Terms of the agreement have not yet been released.

Tennessee is familiar with Studebaker from his time with the AFC South rival Colts, whom he played for the last two seasons. Studebaker appeared in 24 regular-season games for the Colts and made 27 tackles. The 29-year-old earned praise from Pro Football Focus for his performance in 2014 – the website (subscription required) graded him as the Colts’ best defender against the run.

Prior to his time with the Colts, Studebaker spent five seasons with the Chiefs. He played college football at Division III Wheaton and was a sixth-round pick of the Eagles in 2008.