The Eagles did not hire an offensive coordinator this offseason, though former OC Marty Mornhinweg is on Philadelphia’s staff. Doug Pederson may be amendable to adding one in 2021. The Eagles HC said he is open to giving up play-calling responsibilities. However, nothing is imminent on a play-caller change this season, Tim McManus of ESPN.com notes. Although the Eagles have seen several of their skill-position players return to action, they used their 10th offensive line configuration to open Monday night’s game. Nothing has worked particularly well for Philly as of late; the Eagles rank 28th in total offense. These issues have upset owner Jeffrey Lurie, whom McManus adds skipped the Eagles’ Week 11 game in Cleveland out of frustration. The Eagles lost their weeks-long NFC East lead Monday night and sit 3-7-1.

Bryce Love To Undergo Another Surgery

Redskins rookie running back Bryce Love is set to undergo knee surgery tomorrow, reports NFL.com’s Ian Rapoport (via Twitter). It will be a minor procedure that’s “aimed at speeding up the rehab from his original knee surgery.” JP Finlay of NBC Sports Washington was first with the news (on Twitter). 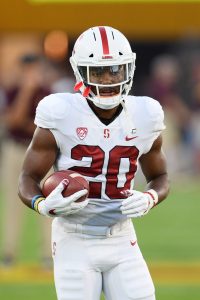 Back in 2017, Love was one of the top running back prospects in the country, as he compiled more than 2,000 rushing yards and 19 touchdowns for Stanford. However, he struggled a bit during his senior campaign, and he ended up tearing his ACL during his final regular season game. The injury had a slight impact on his draft stock; while he was originally projected to be selected in the second or third round of the 2019 draft, he ended up falling to the fourth.

The Redskins still believed in Love’s potential, and the running back was basically expected to redshirt his rookie season. There was pessimism that Love wouldn’t fully recover from his injury, so the Redskins will naturally bring him along slowly. While tomorrow’s surgery is intended to speed up the process, it will still be a while before Love makes his NFL debut.

The Redskins have had some tough luck at running back, as former second-rounder Derrius Guice has been limited to a single game since entering the NFL. The 22-year-old is currently recovering from a torn meniscus, and he could be activated from the injured reserve later this season. Thanks in part to the injuries, the Redskins have been forced to give a 34-year-old Adrian Peterson the majority of their carries this season.

The Redskins selected Stanford running back Bryce Love in the fourth round of the 2019 draft yesterday, and running back Derrius Guice — whom Washington drafted in the second round last year — promptly tweeted out a nonplussed emoji that drew plenty of attention on the NFL Network’s draft coverage. Guice later said his tweet was not a response to the Love selection at all, but regardless of his thoughts on the matter, the pick does set up an interesting dynamic in the team’s RB room.

Guice, of course, tore his ACL last August, thereby ending his rookie campaign before it started. There was a report in December that his recovery had hit a snag, though he was said to be sprinting at full-speed in February. The last we heard, Guice was aiming for a training camp return, and as Mike Florio of Pro Football Talk wrote this morning, head coach Jay Gruden expects the LSU product to be back prior to the start of training camp. Gruden also refuted the December report that Guice’s rehab was delayed, and he added that the Love selection is no reflection on Guice.

Gruden said, “[The Love pick] is no reflection of anybody. We just got an opportunity to draft one heck of a player with an unbelievable production at a big-time school.”

Love entered his final collegiate season as a potential Heisman candidate after a tremendous junior year, but he put together an underwhelming campaign before tearing his ACL in December. There has been some chatter that Love could redshirt his rookie season in Washington as he continues to recover, but Love himself said he plans to be ready to go by the middle of training camp.

That is probably a little ambitious, and Love may very well spend the entire season the PUP list. But if he is ready to suit up at some point this year, it would create a logjam in Washington. The team is also rostering Adrian Peterson — who signed a two-year pact in March — Chris Thompson, and Samaje Perine. As Florio notes, one or more of those players will be on the move when Love is ready to go.

Though it was not reported at the time, Stanford running back and NFL draft hopeful Bryce Love tore his ACL during his final regular season game, Yahoo Sports’ Pete Thamel writes.

Thamel reports the star back underwent surgery to repair the injury on Dec. 18 with Dr. James Andrews and is expected to make a full recovery. He will be at the NFL Draft Combine in February, but will obviously be extremely limited. He is also too early in the rehab process to have a return date set.

“I’m very grateful to Dr. Andrews and his team for making the surgery a seamless process,” Love said in a statement to Yahoo Sports. “Obviously, there’s no such thing as an ideal injury, but I’m on the path to recovery, and my goal remains the same — getting drafted by an NFL team and being the ultimate professional. I’ll be back better than I’ve ever been.”

Love burst on the scene as a junior, taking over for the departed Christian McCaffrey in Stanford’s backfield and rushing for 2,118 yards and 19 touchdowns in 2017. The breakout season helped him finish second in the Heisman Trophy balloting, behind only Baker Mayfield. His senior campaign was not as impressive, however, as Love logged just 739 yards on 166 carries in 10 games.

According to WalterFootball.com, Love is tabbed as the No. 5 running back prospect in the upcoming draft, with a projected draft spot coming in Round 2 or 3. That is likely to take a plunge following the news of the serious knee injury.