Beyond the big questions, the Seahawks have lots on their to-do list this offseason. That includes a potential extension for D.K. Metcalf, whose rookie deal expires after the 2022 season. For his part, the wide receiver says he wants to stay with the Seahawks for the long haul. 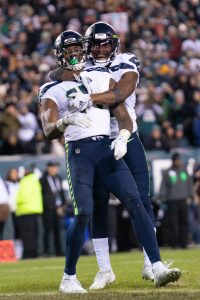 “Of course,” Metcalf said when asked if he wants to sign a new deal with Seattle (via Bob Condotta of The Seattle Times). “I’m not trying to leave, but we’ve got the Cardinals to focus on right now. You can hit me up later in the offseason if you need that question answered.”

Metcalf’s offseason may also include foot surgery, though no decision has been made on that front. Despite playing through serious pain this year, Metcalf has still managed 70 catches for 909 yards and 12 touchdowns across 16 games. In 2020, a healthier campaign, Metcalf went off for 83 grabs, 1,303 receiving yards, and ten TDs en route to his first Pro Bowl selection.

For now, the Seahawks have him under contract for one more year at a paltry $1.12MM cap hit. His next deal should take him north of $15MM/year, slotting him somewhere in the top ten at WR. No matter what the future holds for the team’s other stars, there’s no doubt that the Seahawks want Metcalf to be a part of it.

On this date in 2019, the Seahawks inked D.K. Metcalf to his first pro contract. The Ole Miss product was projected to be a first-round pick, but was left to sign for just $4.6MM over four years after an unexpected slide.

Earlier in the evening, the Seahawks moved down twice. Then, once Metcalf tumbled, the Seahawks went back up the ladder to grab the Patriots’ No. 64 pick. Some evaluators weren’t all that high on Metcalf, apparently, but few could argue with the value.

Metcalf drew national attention for his physique, but the Seahawks saw him as more than just a 6’3″ mass of muscles. He first broke out on the scene with 39 grabs for 646 yards and seven touchdowns as a sophomore at Ole Miss. His follow-up year wasn’t quite as stellar — Metcalf was limited to just seven games while A.J. Brown stole the show.

Taken near the end of Round 2, Metcalf wound up as the ninth receiver to come off the board. But, other than Brown and Terry McLaurin, he dazzled like no other rookie WR that year. Straight off the bat, Metcalf had 58 catches for 900 yards and seven touchdowns. Then, last year, he took his game to a whole ‘nother level with 83 receptions for 1,303 yards and ten touchdowns.

Metcalf used his draft night slight as fuel and took that momentum into 2020 for an even bigger year. With similar progression, Metcalf could set himself up for a serious fifth-year payday while his first-round counterparts play out their option seasons.

It’s been a rough year for 49ers injuries. A few of their key players may not be ready for Week 1. It is now possible Nick Bosa and Jason Verrett will join the likes of Garrett Celek and Jerick McKinnon (in all likelihood) as being sidelined for San Francisco’s opener. During an interview with KNBR (via Pro Football Talk), John Lynch called both Bosa and Verrett 50-50 to suit up for the 49ers’ opener against the Buccaneers. Bosa is battling a high ankle sprain — his latest in a string of maladies since his junior year at Ohio State — and Verrett is also dealing with ankle trouble. The injury-prone cornerback, who tore an Achilles’ tendon in July 2018, sprained an ankle August 7.

Shifting first to some issues the Seahawks’ Week 1 contingent may have, here is the latest from the West divisions:

The Seahawks have officially signed second-round pick D.K. Metcalf, according to a team announcement. Per the terms of his slot, Metcalf will earn roughly $4.6MM over the course of his four-year deal. 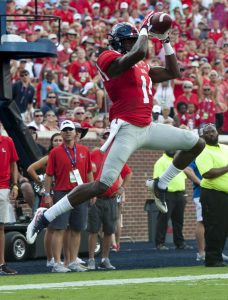 Metcalf has drawn national attention for his physique, but the Seahawks see him as more than just a 6’3″ mass of muscles. The Ole Miss product was widely projected to be a first-round pick this year, but the Seahawks managed to snag him at the end of the second round after a trade up with the Patriots.

Metcalf’s skill set was a hotly debated topic in the draft community, with his college production and agility numbers paling in comparison to his physique and speed-strength combination. Ultimately, he was the ninth wide receiver selected in the 2019 draft.

As a freshman, Metcalf caught 39 passes for 646 yards and seven touchdowns. All turned out to be career-best marks, with A.J. Brown having led the Rebels in receiving last season. Metcalf finished as Ole Miss’ third-leading receiver in 2018, despite appearing in only seven games.

The Seahawks now have ten of their eleven draft picks officially in the fold – only third-round linebacker Cody Barton remains unsigned.

Seahawks Trade Up For D.K. Metcalf

After trading down multiple times in this draft, the Seahawks made a move up. They acquired the No. 64 overall pick from the Patriots.

Seattle moved down in both the first and second rounds. They have been the most fluid team in this draft, which featured them having an extra first-round pick because of the Frank Clark trade.

The move will result in the Seahawks ending D.K. Metcalf‘s slide. The workout phenom will be a second-round pick. Metcalf will attempt to prove what turned out to be a litany of doubters wrong in Seattle. He joins a Doug Baldwin– and Tyler Lockett-fronted receiving corps. Although, Baldwin’s status is now up in the air.

Metcalf’s skill set became a hotly debated topic, with his college production and agility numbers paling in comparison to his physique and speed-strength combination. Many mocked Metcalf as a first-rounder, but the late reports of teams doubting him turned out to be accurate. He became this year’s ninth receiver taken.

The 6-foot-3 wideout declared after his sophomore season. As a freshman, Metcalf caught 39 passes for 646 yards and seven touchdowns. All turned out to be career-best marks, with A.J. Brown having led the Rebels in receiving last season. Metcalf finished as Ole Miss’ third-leading receiver in 2018.