The Ravens are promoting running back Devonta Freeman to the 53-man roster (Twitter link via Adam Schefter of ESPN.com). Freeman, who joined the practice squad last week, will be eligible to play against the Chiefs on Sunday night.

Freeman is far removed from his best work at this point, but the Ravens will hope for the best as RB room has been decimated by injuries. Freeman, of course, has been derailed by injuries of his own. The former Falcons star missed 14 games due to knee and groin ailments in 2018. In 2019, he managed just 3.6 yards per tote. Then, last year, an ankle injury limited him to five games with the Giants. His final line in blue: 54 carries, 172 yards, and a 3.2 ypc.

The two-time Pro Bowler will at least have an opportunity to turn back the clock. The Ravens’ once-stacked RB group is now without J.K. Dobbins (ACL tear), Gus Edwards (ACL tear), and Justice Hill (Achilles tear). Freeman will likely operate as their No. 3 RB this week behind UDFA Ty’Son Williams and fellow vet Latavius Murray.

The Ravens are moving quickly at running back. After Gus Edwards suffered a potentially serious knee injury in practice Thursday, the Ravens agreed to add Devonta Freeman to their practice squad, Adam Schefter of ESPN.com tweets. 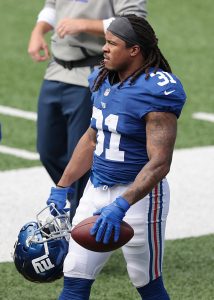 Freeman joined Le’Veon Bell in working out for the team Monday. The Ravens added Bell to their taxi squad Wednesday, and although the team signed Bell first, Schefter adds Freeman is expected to be the back promoted to Baltimore’s active roster first.

Edwards is feared to have suffered a torn ACL. This setback follows J.K. Dobbins‘ ACL tear and Justice Hill‘s Achilles tear. Each injury occurred within the past three weeks, depleting the run-dependent team’s backfield. Should Freeman be bumped up to Baltimore’s active roster ahead of Week 1, he will join second-year UDFA Ty’Son Williams and recent free agent acquisition Trenton Cannon.

Injuries have affected Freeman’s career as well. After the former Falcons starter missed 14 games due to knee and groin ailments in 2018, an ankle injury limited him to five games last season with the Giants. Last season, Freeman rushed for 172 yards on 54 carries. In 2019, he managed just 656 at 3.6 yards per tote. The two-time Pro Bowler has not submitted much in the way of quality since the 2018 injuries, but the Ravens present an interesting opportunity as a run-centric team in a desperate situation.

Both Ravens practice squad backs have not shown much since 2017, when Bell completed the second of his All-Pro seasons, even though they carry unusually high profiles for P-squad cogs. Freeman’s two 1,000-yard seasons came in 2015 and ’16, and the Falcons rewarded him with a deal that at the time marked the top running back contract. Like Bell, Freeman is 29. Each will aim to join Williams as Baltimore ball carriers in a skeleton-crew backfield.

Devonta Freeman‘s time with the Saints will end after exactly a month. After a late-summer signing, New Orleans will release the veteran back, Adam Schefter of ESPN.com tweets. 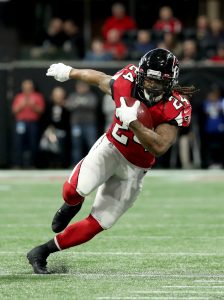 After an injury cut Freeman’s Giants season short last year, he returned to the NFC South on a July 31 deal with the Saints. The Saints’ Alvin Kamara– and Latavius Murray-topped depth chart does not feature much work for other backs, and Freeman will head back to free agency.

The former Pro Bowler was a hotter commodity in 2020, having made several visits before his in-season Giants signing. But Freeman was believed to have set too high an asking price, leading to his lengthy 2020 stay in free agency. He ended up with the Giants and averaged just 3.2 yards per carry on 54 totes in the wake of Saquon Barkley‘s Week 2 injury.

The Giants waived Freeman in January, clearing a path for him to join the Bills during their playoff run. Freeman caught on with Buffalo’s practice squad. The former Super Bowl LI starter did not see any postseason action with the Bills.

While last year’s injury spared Freeman an extensive workload, marking the second time in three years he finished a season with fewer than 60 carries, it also docked his stock. Once the NFL’s highest-paid running back — via his 2017 extension with Atlanta — the 29-year-old veteran is running out of chances. 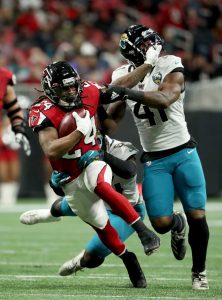 The Bills have agreed to sign running back Devonta Freeman to the practice squad, as Ian Rapoport of NFL.com tweets. Freeman will provide insurance for Buffalo in the wake of Zack Moss‘ season-ending injury.

The Giants released the Drew Rosenhaus client after the season in what was effectively a formality. It was also a courtesy move — Freeman was set to reach free agency anyway, so the Giants agreed to cut him so that he could potentially hook on with a playoff team.

The Giants didn’t have much interest in keeping Freeman around for 2021. Injuries and the COVID-19 list cost him much of the year and he played in just five games. All in all, he registered 171 yards off of 54 carries — good for just 3.2 yards per carry — and one rushing touchdown. He didn’t do much in the passing game either, finishing with seven catches for 58 yards.

With the Falcons, Freeman posted two separate 1,000-yard seasons with 1,500+ scrimmage yards each time. No one’s expecting a reprise at this point, but he could help out the Bills in a pinch.

The Giants have officially waived running back Devonta Freeman from injured reserve. The move is more of a formality than anything, since Freeman’s contract is set to expire.

Freeman inked a one-year deal with the G-Men in September, after Saquon Barkley was lost for the year. The one-time star would play in just five games before spending time on IR and the COVID-19 list. Freeman leaves New Jersey with 171 yards off of 54 carries, resulting in a 3.2 yards per carry average, plus one rushing touchdown. He didn’t do much in the passing game either, finishing with seven catches for 58 yards.

It was a far cry from Freeman’s best work with the Falcons. With Atlanta, Freeman managed two 1,000-yard seasons with 1,500+ scrimmage yards. Freeman won’t turn 29 until March, but his salad days are a distant memory at this point.

Freeman will be free to sign with any club in the spring, but teams won’t be lining up for him. If the Drew Rosenhaus client continues to play, he’ll likely put pen to paper sometime closer to the start of the season.

The Giants designated running back Devonta Freeman for return on Friday, as Jordan Raanan of ESPN.com tweets. Freeman landed on injured reserve in November with an ankle injury, and New York now has three weeks to add him to the active roster.

Raanan expects Big Blue to do just that. In his first practice since being put on IR, Freeman was reportedly moving well and appears close to a return.

The former Falcons standout joined the Giants on a one-year deal worth up to $3MM in late September, and though he started four games for the team, he did not do much to disprove the notion that he is just not the same player he was a few years ago in Atlanta, where he earned back-to-back Pro Bowl nods from 2015-16.

Freeman, 28, averaged a mere 3.2 yards per carry over 54 totes with the Giants this season. He had the chance to seize a prominent role in the wake of Saquon Barkley‘s season-ending injury, but general ineffectiveness and the ankle injury prevented that from happening.

Still, the Giants surprisingly find themselves in the middle of a playoff race, and they can use all the help they can get. In Freeman’s absence, Wayne Gallman has stepped up in a big way, racking up 561 yards and six TDs on 121 carries (good for a 4.6-YPC average). 32-year-old veteran Alfred Morris has also maintained a 4.6-YPC average as Gallman’s complementary back.

New York, 5-8, will try to keep its postseason hopes alive with a win over the Browns tonight. They will again call upon backup QB Colt McCoy, as starter Daniel Jones is battling an ankle sprain of his own and a lingering hamstring injury. The G-Men will also be without top CB James Bradberry, who is on the reserve/COVID-19 list.