The Broncos will still be without their best players when they face the Chiefs Sunday, with Von Miller, Courtland Sutton and Jurrell Casey either out for the season or most likely (in Miller’s case) shelved until 2021. But they will be healthier on defense this week. 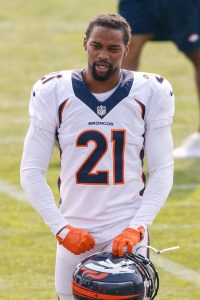 Vic Fangio said Friday that A.J. Bouye and defensive end Dre’Mont Jones will be activated from IR ahead of Denver’s home game against Kansas City. Bouye has been out since leaving the Broncos’ Week 1 loss with a shoulder injury. Despite the injuries, Denver’s defense ranks sixth in DVOA. Though, the Chiefs will certainly test the unit.

Denver acquired Bouye from Jacksonville this offseason, sending the Jaguars a fourth-round pick for the former Pro Bowler. Bouye has played just 28 snaps this season. The Broncos have relied on 2019 free agency acquisition Bryce Callahan, who has stayed healthy thus far after missing all of last season, and third-round rookie Michael Ojemudia at corner in Bouye’s absence.

Jones suffered a PCL strain and a bone bruise in his knee in Week 2 but will come off the team’s IR when first eligible. The 2019 third-round pick will be expected to play a key role going forward, with Casey out for the season. Jones recorded 3.5 sacks and an interception as a backup last year.

The Broncos are set to end Timmy Jernigan‘s brief Denver stay. They are planning to release the veteran defensive tackle, Mike Klis of 9News tweets.

Down Jurrell Casey for the season and having placed Dre’Mont Jones on IR, the Broncos signed Jernigan late last month. He ended up playing a small role, working as a backup against the Jets and Patriots. The former Ravens and Eagles starter played just 11 defensive snaps for the Broncos, however.

Denver still has Jones on IR, but he is eligible to return to the active roster after missing the past three games. Vic Fangio said Jones and fourth-year defensive lineman DeMarcus Walker (also on IR) have a chance to play in Week 7. The Broncos used Shelby Harris, Mike Purcell and DeShawn Williams as their D-line starters against the Patriots. With Casey out, Jones would be in line for a bigger role than he had as a rookie.

This has been a complicated year for Jernigan, a full-time starter for the 2016 Ravens and 2017 Super Bowl champion Eagles. His one-year, $3.75MM Texans deal ended up being called off. The Jaguars signed him in mid-August but cut him in September. The 28-year-old defender will be back in free agency after another short stay with a team.

The Broncos signed defensive tackle Dre’Mont Jones to his four-year rookie deal, according to Aaron Wilson of the Houston Chronicle (on Twitter). The third-round pick will receive a $4.188MM contract that includes a $1.066MM signing bonus. 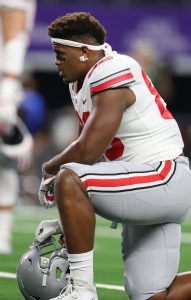 Jones was eligible to enter the 2018 draft, but opted for another season at Ohio State for additional seasoning. Entering this year’s draft, many pegged Jones as a potential first-round selection, but size and strength concerns contributed to a drop in stock between December and April. On draft week, Jones still appeared on target for the second round, but he fell to the third where the Broncos pounced.

While some evaluators are skittish about whether Jones can be a difference-maker at the next level, John Elway & Co. do not seem concerned. Jones is coming off of his best statistical season to date after notching 8.5 sacks and 13 tackles for loss for the Buckeyes.

With Jones signed, the Broncos are left with just two unsigned rookies in tackle Dalton Risner and quarterback Drew Lock.

Dre’Mont Jones is going pro. The Ohio State defensive lineman announced that he will forgo his final year of eligibility in order to enter the 2019 NFL Draft. 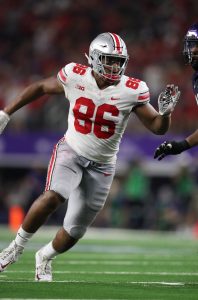 The redshirt junior has been on the NFL radar for some time now and could have turned pro last year. However, he decided to return to the Buckeyes for another year of seasoning, and he believes that was the right call.

“I think it was a great decision for me to come back,” said Jones, who tallied 40 tackles, nine sacks, and two defensive touchdowns in his All-Big Ten season. “I kind of proved myself.”

Unlike other top prospects, Jones says that he will play in his team’s bowl game. So, for now, his focus is on the Jan. 1 Rose Bowl against No. 9 ranked Washington. After that, he’ll set his sights on gearing up for workouts.

“My thing with injuries is that they’re a part of the game,” Jones said. “You have to just play with it. As much as you think about it the more it can affect you.”

Most draft prognosticators see Jones as a first round talent – ESPN.com’s Todd McShay has Jones as the No. 21 ranked player on his board while Bleacher Report’s Matt Miller has him 19th. His pass rushing technique is said to need work, but he offers serious potential and his 6’3″, 286 pound frame looks to be NFL-ready.