Former 49ers/Bengals defensive end Justin Smith announced his retirement last May, but rumors are circulating at the combine that Smith would like to play again, a source tells Mike Florio of Pro Football Talk. However, Smith would not want to return to San Francisco, adds Florio. 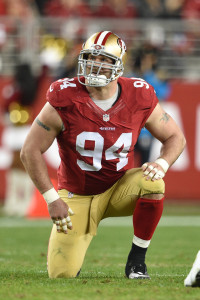 While Smith may not want to return to the Bay Area, the 49ers would still hold his rights in the even that he came out of retirement, as Florio notes. Smith had one year left on his deal at a cap charge of nearly $6.5MM, and that contract has tolled, meaning San Francisco would control Smith for one more season. Smith could presumably be traded, but as Florio adds, its tough to imagine another club giving up much of value for a 36-year-old lineman who has spent a year away from the NFL. Of course, the 49ers could also choose to release Smith, but they’d have little incentive to do so.

Even in his final NFL season, Smith was still a dominant force, racking up five sacks and grading as the league’s No. 11 3-4 defensive end among 47 qualifiers, per Pro Football Focus. He was just one of several San Francisco players to hang up his cleats after the 2014 campaign, including linebackers Chris Borland and Patrick Willis, and right tackle Anthony Davis (who is also said to be mulling a return to the NFL). Head coach Jim Harbaugh also notably left the NFL for the University of Michigan; his replacement, Jim Tomsula, has since been fired and replaced by Chip Kelly.

After signing wide receiver Demaryius Thomas to a five-year contract today, the Broncos issued a statement publicly denying that they colluded with the Cowboys to limit the earnings of Thomas and Dez Bryant, as the NFLPA has alleged. “The suggestion that our club may have colluded with another team about a negotiation is completely false and without any merit,” the Broncos said, per Ian Rapoport of NFL.com (Twitter link). Earlier tonight it was reported that the union is now unlikely to pursue collusion charges against the two teams. Here’s more from around the NFL..

Earlier today, defensive lineman Ray McDonald was arrested after another apparent domestic violence incident. Hours later, the Bears made a rare Memorial Day move and released McDonald from his contract. Here’s a look at the latest reactions to the biggest story of the day..

The NFL and NFLPA recently reached a settlement that capped the number of unsigned veterans who can participate in tryouts at rookie minicamp to five players, sources tell Alex Marvez of FOX Sports. The financial compensation for participating veterans was one of the NFLPA’s concerns, and that apparently outweighed the upside of deals coming together for players like Josh Morgan, who signed with the Saints after an impressive tryout during rookie minicamp. Here’s more from around the NFL..

Can Tim Tebow find success with the Eagles? Former teammate Eric Decker seems to think so. “Chip’s been doing a lot of stuff this year, so I think anything’s possible,” Decker, now with the Jets, told Manish Mehta of the Daily News. “Really, (Tebow) can create his own role. I know he wants to be head quarterback, but he can create a role for himself that can help a team in many ways (whether it’s) the two-point conversion if it’s moved up or a goal-line package. He has the athletic ability to be a personal punt protector… and can play other positions. They’ll figure out a way to utilize him if it’s going to help them be a better football team.” Here’s more from the NFC..

After months of speculation, the 49ers announced that defensive end Justin Smith has decided to retire.

Smith spent the last seven years in San Francisco after a seven-year stint with the Bengals. From his rookie season through 2014, he appeared in 221 total regular season contests, racking up 87 total sacks and earning spots in five consecutive Pro Bowls from 2009 to 2013. Last year, in his age-35 season, Smith totaled five sacks (giving him 87 for his career) and Pro Football Focus (subscription required) ranked him the NFL’s 11th-best 3-4 defensive end out of 47 qualifiers.

“Tough. Physical. Durable. Hard-working. Dedicated. Selfless. Justin embodies each of those qualities and brought even more with him to work each and every day,” said 49ers CEO Jed York in the press release. “Whether it was chasing down a wide receiver and forcing a fumble to seal a win, or driving a tackle back into the quarterback’s chest, he gave everything he had every play. Justin has earned the respect of the entire NFL community and he will always be remembered as one of the 49ers all-time greats.”

During his career, Smith started 217 of 221 games played, including a streak of 185 consecutive starts from his rookie season through December of 2012. He finished his career with 1,370 tackles, 87.0 sacks, 16 forced fumbles, 10 fumble recoveries, three interceptions and 30 passes defensed.

Justin Smith has made a decision about his future, but it’s not clear which way he’ll be going. The 49ers defensive end tells Matt Barrows of The Sacramento Bee (on Twitter) that the verdict is in and an announcement is expected to come from the team later today. Matt Maiocco of CSNBayArea.com (Twitter link) adds that the news could come down at 1pm PT (3pm CT/4pm ET).

On Thursday, 49ers GM Trent Baalke said that he hoped to get a better grasp on Justin Smith‘s future on Friday. At the time, it sounded like the team didn’t gain any clarity on his decision. “As of right now, there’s not [any additional clarity on his situation],” coach Jim Tomsula said. “[Friday] morning, we were working and meeting and doing our thing. The guys were lifting. Then we came out here. So, no, I haven’t seen or talked to him.”

Smith has indicated that if he does come back, it would probably be for only one more season. Some speculated that the 49ers picking Oregon defensive lineman Arik Armstead was a sign that Smith was set to call it quits but, since Smith doesn’t intend on being around beyond 2015 anyway, that draft choice meant very little in terms of the veteran’s future. Smith has been the 49ers’ top defensive lineman since he arrived in free agency in 2008, but he has battled injuries in recent years, including a triceps injury in 2012 and a shoulder injury in 2013.

In 2014, his age-35 season, Smith totaled five sacks (giving him 87 for his career) and Pro Football Focus (subscription required) ranked him the NFL’s 11th-best 3-4 defensive end out of 47 qualifiers.

The Chiefs have an interesting class of rookies at their three-day minicamp, as Dave Skretta of The Associated Press. Kansas City’s group includes a Star Wars expert, the son of wrestling superstar Sting, and a player who beat cancer. While you get to know the newest prospective members of the Chiefs, here’s a glance at the AFC and NFC West..

In a piece for TheMMQB.com, Robert Klemko details La’el Collins‘ unusual draft journey, from the death of his former romantic partner Brittany Mills to his decision to sign with the Cowboys. Klemko’s story is full of interesting details, including a reveal that, despite telling teams their client would refuse to sign and would re-enter the 2016 draft if he was selected on Day 3, Collins’ agents were probably bluffing.

“We can put it on the record now: We were never going back in the draft,” Rick Smith of Priority Sports said of waiting for the 2016 draft. “If someone had drafted him, we would’ve had a long, long discussion about it, but at the end of the day you can’t go back in the draft. He could get injured, gain weight, or 10 great tackles could come out. Too many risks.”

Here’s more on Collins, along with a few more items from around the NFC:

Justin Smith plans to sit down with 49ers officials some time this month and decide whether he will return for a 15th season, Matt Barrows of The Sacramento Bee writes. “You’ll know in about three weeks or so,” the veteran defensive lineman said.

Smith, 35, would not say which way he was leaning, however. The veteran is under contract for one more season and although he has not been taking part in the 49ers’ offseason program, he is working out regularly on his own. His workout routine does not hint at his decision though – he says he’d work out even if he was out of football for health reasons.

If Smith does come back, he says it would probably be for only one more season anyway. Some speculated that the 49ers picking Oregon defensive lineman Arik Armstead was a sign that Smith was set to call it quits. However, since Smith doesn’t intend on being around beyond 2015 anyway, that draft choice meant very little in terms of the veteran’s future. Smith has been the 49ers’ top defensive lineman since he arrived in free agency in 2008, but he has battled injuries in recent years, including a triceps injury in 2012 and a shoulder injury in 2013.

In 2014, his age-35 season, Smith totaled five sacks (giving him 87 for his career) and Pro Football Focus (subscription required) ranked him the NFL’s 11th-best 3-4 defensive end out of 47 qualifiers.