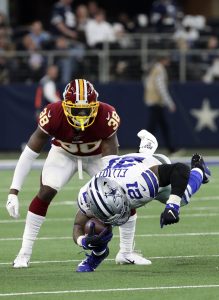 The Colts are apparently thinking about bringing in an experienced cornerback. Indianapolis worked out veteran corners E.J. Gaines and Kayvon Webster, according to Adam Caplan of Sirius XM (Twitter link).

Starting cornerback Pierre Desir has missed the past two games with a hamstring injury, so perhaps that is why they’re looking for reinforcements. Wesbter entered the league as a third-round pick of the Broncos back in 2013, and he won Super Bowl 50 with the team. He signed with the Rams in 2017 and was a starter for them before tearing his Achilles late in the season. After recovering he signed with the Texans last year, but barely played due to more injuries.

Webster latched on with the Saints earlier this year but was released at final cuts, as all the injuries appear to have sapped some of the 28-year-old’s effectiveness. He’s received a little bit of interest, and just worked out for New Orleans again a couple of weeks ago. Gaines is another player who used to be highly thought of before injuries derailed his career. Gaines was traded from the Rams to the Bills in the Sammy Watkins trade, and ended up starting all 11 games that he appeared in for Buffalo in 2017.

After multiple concussions landed him on injured reserve during his time with the Browns last year, he re-signed with the Bills this past offseason. He was cut in camp after going down with a core muscle injury. He’s been making the workout rounds recently, and we just heard a couple of weeks ago that he was now fully healthy after meeting with the Texans.

Saints cornerback Eli Apple left their game on Sunday against the Bears with an injury. While original reports suggested Apple hyperextended his knee, the organization has yet to reveal how much time they expect him to miss. However, the team has begun looking at replenishing their secondary depth, holding a workout with free-agent corner Kayvon Webster according to Ian Rapoport of the NFL Network.

Webster began his career with the Broncos, who selected him in the third round of the 2013 NFL Draft out of South Florida. He served as a primary backup for four seasons in Denver before signing with the Rams in 2017 to be one of the team’s top corners. He started eleven games before suffering a season ending injury.

Since then, Webster has appeared in just two games – both with the Texans in 2018. A combination of injuries and roster shuffling has left him on the outskirts of NFL rosters.

The Saints originally signed Webster in June of this year, but released him prior to the start of the regular season. Since his release, Webster has worked out for the Jets, but his familiarity with New Orleans would make him a good fit, if they do want to supplement their secondary while Apple recovers.

Eyeing a seventh NFL season, Kayvon Webster auditioned for the Jets on Tuesday, Ian Rapoport of NFL.com tweets. Webster played for the Broncos during each of Adam Gase‘s two seasons as Denver’s OC (2013-14).

The Saints released Webster prior to cutdown Saturday. This marks the former third-round pick’s first workout since. For the Jets, it represents another sign their Gase-Joe Douglas regime would like to change things up at cornerback.

High-priced Mike Maccagnan addition Trumaine Johnson was benched for Monday night’s game. Beyond Johnson, the Jets do not have much in the way of proven corner talent. Douglas said at multiple offseason junctures he wanted to upgrade here. Webster, though, would profile as more of a depth piece for the group.

A four-year Broncos backup, Webster was a full-time starter with the 2017 Rams before suffering a season-ending injury. An injury ended his 2018 campaign as well. He played in just two Texans games last season and met with the 49ers and Bears before landing in New Orleans. Should Webster play in 2019, it would be his age-28 season.

The Saints have cut cornerback Kayvon Webster, according to multiple reports. The 28-year-old’s run in New Orleans lasted less than three months.

The Saints auditioned several cornerbacks early on this summer and liked what Webster brought to the table. But, with a solid group of CBs already locked in, a spot was far from guaranteed for the vet.

Saints To Meet With Kayvon Webster

Free agent cornerback Kayvon Webster will visit the Saints on Wednesday, a source tells Adam Schefter of ESPN.com (on Twitter). The 49ers and Bears also have expressed interest in Webster recently and it might not be long before he finds a new NFL home.

Webster garnered buzz early in his career as a talented cornerback with the Broncos who was buried on the depth chart behind more established names. Many expected him to break out upon signing with the Rams in 2017 and reuniting with Wade Phillips, but he didn’t do much in his injury-shortened season. In 2018, injuries hampered him yet again as he tried to reestablish himself with the Texans.

The Saints will start Marshon Lattimore and Eli Apple at the outside cornerback spots with Patrick Robinson, P.J. Williams and rookies Chauncey Gardner-Johnson and Saquan Hampton battling for the primary slot role.