Linebacker Rey Maualuga visited the Bengals on Wednesday, according to Field Yates of ESPN.com (on Twitter). Maualuga, of course, offers familiarity with the Bengals system and he could be an easy plug-in for the team’s injury-ravaged LB group. 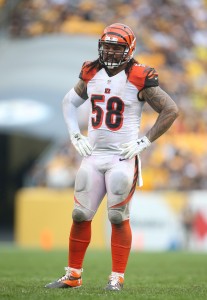 The status of outside linebackers Nick Vigil (hamstring) and Vontaze Burfict (concussion) is up in the air as the Bengals get set for Sunday’s game against the Vikings. Rookies Carl Lawson and Jordan Evans will see an increase in playing time, but the presence of a vet like Maualuga would help solidify the team’s pass rush.

Maualuga joined the Dolphins in the summer, but he found himself without a job after he was arrested for battery at a nightclub in November. Prior to that incident, the linebacker made four starts for the Dolphins and played in six games.

The Bengals are not mathematically eliminated from the playoffs, but they’re virtually out of the running. However, Maualuga can get himself back in the NFL conversation with a successful three-game audition. 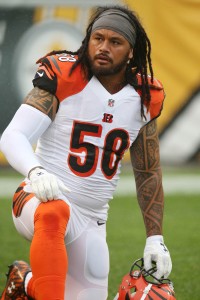 Following rookie Raekwon McMillan‘s season-ending knee injury, the Dolphins have added a veteran replacement. According to Armando Salguero of the Miami Herald, the team has signed linebacker Rey Maualuga. According to the writer, Maualuga will earn the ninth-year veteran’s minimum base salary of $900K, and he’ll earn another $80,000 via a guaranteed bonus. Salguero notes that the linebacker will ultimately count $695K against the team’s cap.

The 30-year-old worked out for the Dolphins earlier this week, as he competed with several free agents for the opportunity to fill the team’s hole at linebacker. As Salguero writes, the team’s decision to sign Maualuga could be attributed to his experience with defensive coordinator Matt Burke, who previously served as the player’s linebackers coach in Cincinnati. The linebacker had received interest from the Chiefs earlier this offseason, but he ultimately left his audition without a contract.

The 2009 second-round pick had spent his entire eight-year career with the Bengals before he was released by the organization in March. Last season, Maualuga appeared in 14 games, setting career-lows in starts (six) and tackles (27). Pro Football Focus wasn’t fond of his performance, as he ranked as the third-worst linebacker in the league. Of course, he’s only two years removed from a productive 75-tackle campaign. Plus, as Salguero explains, the Dolphins will only be counting on the veteran to play 25-30 snaps per game, serving primarily in “run-stuff situations.”

With second-rounder McMillan out for the season and veteran Koa Misi failing to recover from his spinal fusion surgery, the Dolphins were struggling for linebacker depth. Behind starters Lawrence Timmons, Mike Hull, and Kiko Alonso, the team is only rostering four reserves in Neville Hewitt, Trevor Reilly, Brandon Watts, and Deon Lacey.

Along with the previously reported Rey Maualuga, the linebacker-needy Dolphins worked out free agent Kelvin Sheppard on Wednesday, according to Barry Jackson of the Miami Herald (on Twitter). Miami didn’t sign either player and “will keep monitoring options,” writes Jackson, who adds that the team hasn’t ruled out picking up Maualuga. Whether it will continue considering Sheppard is unclear.

Had the Dolphins inked Sheppard to a deal Wednesday, he’d have been in line for his second stint with the team. Sheppard was a member of the Dolphins from 2014-15, when he made 30 appearances with the club and started 15 times. Nearly all of those starting appearances (14) occurred in 2015, a season in which Sheppard amassed a career-high 102 tackles. The former LSU Tiger wasn’t much of a difference-maker in Miami, though, and also wasn’t a high-impact defender in stints with the Bills (2011-12), Colts (2013) and Giants (2016).

Sheppard, 29, appeared in each of the Giants’ games last season and made 11 starts, but he finished with just 47 tackles, failed to force any turnovers and earned a poor grade (39.1) from Pro Football Focus. He hadn’t generated any known interest in free agency until his workout with the Dolphins.

Miami’s decision to bring in Maualuga and Sheppard came as a reaction to the ACL tear that ended second-round rookie linebacker Raekwon McMillan‘s season last week. The Dolphins will also go without Koa Misi, whom they placed on injured reserve in June as a result of the spinal fusion surgery he underwent last year, further weakening their depth at linebacker.

The Dolphins are taking a look at linebacker Rey Maualuga, according to Barry Jackson of the Miami Herald. He’ll be one of a handful of linebacker auditioning for Miami on Wednesday.

Maualuga, 30, spent eight seasons with the Bengals before being released in March as a cap casualty. He was a serviceable starter for most of his tenure in Cincinnati, but he was on the field for only 326 snaps in 14 games last year. He rated as the third-worst linebacker in the league, per Pro Football Focus’ advanced metrics.

Still, it’s possible that the USC product could turn things around this year and the Dolphins want to leave no stone unturned after losing two linebackers to season-ending injuries. Without Koa Misi and Raekwon McMillan, the Dolphins could definitely use reinforcements.

No Deal Imminent Between Chiefs, Maualuga

The Chiefs brought in former Bengals linebacker Rey Maualuga for a visit earlier this week, but Terez A. Paylor of The Kansas City Star reports that Maualuga left without a contract, and it does not appear as though there is anything imminent between the two sides at this time.

Kansas City also hosted free agent linebacker Gerald Hodges a few weeks ago as it attempts to bolster a unit that ranked No. 26 in the league against the run in 2016. Hodges, too, left town without a contract.

Maualuga, a USC product, was drafted by the Bengals in the second round of the 2009 draft, and he was a serviceable starter for most of his eight-year tenure in Cincinnati, but he saw his playing time decrease last season, as he was on the field for just 326 snaps in 14 games. He rated as the third-worst linebacker in the league, per Pro Football Focus’ advanced metrics.

Most of the Chiefs’ linebackers – including Justin Houston, Derrick Johnson, and Tamba Hali – are homegrown. Victor Ochi, who was previously with the Jets’ taxi squad, is the only LB to join the group since the end of the 2016 season, and he profiles as more of a pass rusher than run-stopper. It appears that the Chiefs’ search for a run-stuffing linebacker will continue on, and they may now turn to the draft to fill that need.

Former Bengals linebacker Rey Maualuga will be visiting the Chiefs on Thursday, a source tells Terez A. Paylor of The Kansas City Star (on Twitter). Cincinnati released the linebacker late last week, ending his eight-year run with the team.

Maualuga was a longtime starter for the Bengals but he was demoted in 2016. He saw just 326 snaps on the year and Pro Football Focus rated him as the third-worst linebacker out of the 100+ players who qualified for a ranking. The Chiefs could sign Maualuga with the hope that a change of scenery will rejuvenate him.

Most of the Chiefs’ linebackers – including Justin Houston, Derrick Johnson, and Tamba Hali – are homegrown. Victor Ochi, who was previously with the Jets’ taxi squad, is the only LB to join the group since the end of the 2016 season. If signed, Maualuga would be the second free agent LB of the year for Kansas City, and he would potentially displace Ochi.

Rey Maualuga‘s time with the Bengals will end after eight seasons. The team will release the linebacker, according to Paul Dehner Jr. of the Cincinnati Enquirer (on Twitter).

The release will create $3.75MM in cap room. Maualuga’s place on Cincinnati’s roster became tenuous after the Bengals acquired Kevin Minter last week, and the former USC standout will have to find another NFL employer.

The middle linebacker played in 114 games with the Bengals. Under Marvin Lewis, that’s the most among Bengals’ backers. Maualuga was a full-time starter for his first seven seasons, but the former second-round pick saw his playing time decrease last season. The team used him on just 326 snaps in 14 games. He rated as the third-worst full-time linebacker, in the opinion of Pro Football Focus.

Cincinnati’s linebacking corps looks less cloudy as a result. Minter, Vontaze Burfict and Vincent Rey look to be the 2017 starters. Maualuga, who turned 30 in January, made just 27 tackles last season — a steep drop from his work during the Bengals’ five-year run of playoff berths. Minter signed a one-year, $4.25MM contract. Maualuga was slated to play for $3.15MM base.

This also continues a transition for the Bengals, who have lost several key contributors from those postseason-qualifying teams. Andrew Whitworth, Kevin Zeitler and Domata Peko departed like Reggie Nelson, Marvin Jones and Mohamed Sanu did last year as UFAs. The Bengals’ defensive second level will carry younger crew members in 2017; Karlos Dansby also departed to return to Arizona.

FRIDAY, 2:27pm: Maualuga’s three-year pact with the Bengals is worth $15MM, with $4.5MM in guaranteed money, tweets Albert Breer of the NFL Network.

THURSDAY, 2:57pm: The Bengals have locked up one of their pending free agents, according to Adam Schefter of ESPN.com (Twitter link), who reports that the team is in agreement with linebacker Rey Maualuga on a new three-year contract. The Bengals have since confirmed the move, announcing the signing on Twitter.

While re-signing Maualuga would have been on Cincinnati’s offseason to-do list anyway, the uncertain status of fellow linebacker Vontaze Burfict likely made bringing back Maualuga a greater priority for the club. Burfict is recovering from undergoing microfracture surgery on his knee, and Maualuga was one of the defensive leaders for the Bengals in his absence.

A starter at linebacker for Cincinnati since he joined the team in 2009, Maualuga played 12 games in 2014, recording 61 tackles to go along with five passes defended and an interception. In 452 defensive snaps, the 28-year-old graded about in the middle of the pack, according to Pro Football Focus’ metrics (subscription required), which placed him 27th out of 60 qualified inside linebackers.

Per Geoff Hobson of Bengals.com, Maualuga was one of three players the Bengals had hoped to get under contract before they reached the open market next week. The club is also attempting to work out new agreements with guard Clint Boling and kicker Mike Nugent, though it remains to be seen if that will happen before their agents can talk to rival suitors on Saturday.

It’s Saturday morning, and ESPN.com’s NFL writers are opening their mailbags to answer questions from the readers. Let’s check out some notes from the AFC…