Tony Sparano changed the Raiders‘ culture during his time in Oakland, Vic Tafur of The Athletic writes. Sparano, who died unexpectedly over the weekend, didn’t win when he was at the helm of the Raiders, but he earned the respect of his players through his hard work and love of the game.

“He is up close and personal and blunt,” defensive end Justin Tuck once said. “He treats like you a man. I like his coaching style. … He is honest. There is no B.S. with Coach Sparano.”

Sparano worked for nine NFL teams in 19 seasons and he touched innumerable lives during his years on the sidelines. Success is largely measured by wins and losses in football, but Sparano achieved a great deal even when the record of his team did not show it.

Vikings offensive line coach Tony Sparano, who previously served as the head coach of the Dolphins and the interim head coach of the Raiders, in addition to a number of other coaching positions in the NFL and collegiate ranks, has passed away, per KSTP.com (the Vikings have since confirmed the news). He was just 56.

Sparano complained of chest pains on Thursday and was admitted to a hospital, but was released on Friday following tests, according to Chris Mortensen of ESPN.com (Twitter links). Sparano’s wife then found him unconscious Sunday morning as his family was attempting to leave for church. 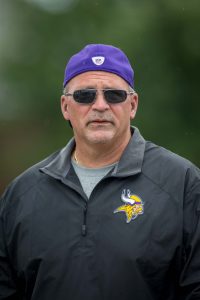 Sparano’s coaching career began as the offensive line coach at the University of New Haven in 1984, and after working on the offensive coaching staff at Boston University from 1988-93, he rejoined New Haven as head coach in 1994. He moved to the NFL as an offensive quality control coach for the expansion Browns in 1999, which marked the beginning of a 19-year career in the pros.

He is, of course, best known for his time as Miami’s head coach and his innovative Wildcat offense that became an NFL sensation in 2008, his first year at the helm for the Dolphins. Miami would go 11-5 that season en route to an AFC East title, the only time since 2003 that a team other than the Patriots has won that division (although Tom Brady was lost for the season during Week 1 of that campaign). The Dolphins, though, lost to the Ravens during the wildcard round of the 2008 playoffs, and they would not return to the postseason under Sparano’s watch.

Miami fired Sparano towards the end of the 2011 season, and he became the offensive coordinator of the division-rival Jets the following year. He moved on to the Raiders in 2013 and he took over as Oakland’s interim head coach upon Dennis Allen‘s dismissal following Week 4 of the 2014 campaign. The Raiders went just 3-9 under his command, however, and he would not get another shot as head coach, so he finished his NFL head coaching career with a 32-42 overall record.

Nonetheless, the 49ers hired him to be their tight ends coach in 2015, and he signed on with the Vikings in 2016. He may have moved around a lot, but he was clearly a respected coach with an offensive mind that NFL teams appreciated.

He leaves behind his wife, Jeannette, three children (one of whom, Tony Sparano Jr., is currently an assistant offensive line coach for the Jaguars), and four grandchildren.

“Our hearts go out to Jeanette and the entire Sparano family as we all mourn the loss of Tony. Tony was a passionate and driven individual who cared deeply about his family, and especially enjoyed spending time with his grandchildren. Tony’s presence within the Vikings organization will be deeply missed. We are only thinking of Tony’s family during this incredibly difficult time. We ask that the entire NFL and Vikings family keep the Sparanos in their thoughts.”

We here at PFR offer our condolences and best wishes to Sparano’s family and friends.

The Vikings are set to hire former Dolphins head coach Tony Sparano as their offensive line coach, as Sid Hartman of the Star Tribune writes. Sparano spent last season on the 49ers’ staff. 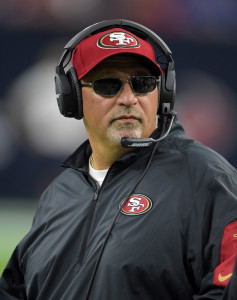 Sparano broke in to the NFL as a quality control coach with the Browns in 1999. He most notable time came as head coach of the Dolphins from 2008-11, when he posted a record of 29-32, but only made the playoffs once (during his first season). Sparano spent the ’12 season as the Jets’ offensive coordinator before taking over as assistant head coach/OL of the Raiders in ’13. Following Dennis Allen’s firing in September of 2014, Sparano was promoted to interim head coach, and guided Oakland to a 3-9 finish. Around this time a year ago, Sparano signed on with the 49ers to serve as an assistant.

Earlier this week, Vikings head coach Mike Zimmer announced that he did not renew Jeff Davidson‘s contract, creating an opening at offensive line coach in Minnesota.

The Browns struck a deal today to bring Hue Jackson aboard as their new coach, leaving five teams with active head coaching searches. Additionally, plenty more clubs are looking to hire assistants to fill out their staffs, so we’ve got plenty of coaching-related notes and rumors to round up this afternoon. Let’s dive in….

5:04pm: Mangini’s deal will be for three years, tweets Schefter.

4:22pm: New 49ers head coach Jim Tomsula has begun to fill out his staff, as he’s added both a defensive coordinator and a tight ends coach today. Eric Mangini, who acted as San Francisco’s tight ends coach in 2014, will take over DC duties, while Tony Sparano, who served as the Raiders’ interim head coach for the latter portion of last season, will replace Mangini as TE coach (Twitter links via Adam Schefter of ESPN).

Both of the 49ers’ hires have previous head coaching experience, which will no doubt be valuable to Tomsula as he embarks upon his first HC opportunity. Despite the fact that he’s been an NFL coach since 1996, Mangini is still just 44 years old. After rising through the defensive ranks in New England, Mangini was hired as the Jets head coach in 2006, and accrued a 23-25 in three seasons at the helm. He moved on to Cleveland, where his run was less successful, as he finished with a 10-22 mark before being fired after the 2010 season. Mangini, who’s been with the Niners since 2013, also was considered for the vacant defensive coordinator positions in Oakland and Washington.

Despite being nearly ten years older than Mangini, Sparano has actually spent less time coaching in the NFL, as he broke in as a quality control coach with the Browns in 1999. He most notable time came as head coach of the Dolphins from 2008-11, when he posted a record of 29-32, but only made the playoffs once (during his first season). Sparano spent the ’12 season as the Jets’ offensive coordinator before taking over as assistant head coach/OL of the Raiders in ’13. Following Dennis Allen’s firing in September of last year, Sparano was promoted to interim head coach, and guided Oakland to a 3-9 finish.

Mangini will replace Vic Fangio, who left to take the Bears’ DC job. Mangini always employed a 3-4 front during his tenure as a head coach, so the club shouldn’t be looking at any dramatic changes in terms of scheme. Meanwhile, San Francisco is still in need of an offensive coordinator, and Alabama play-caller Lane Kiffin is considered the favorite for the job. A Kiffin hire, of course, would have Tomsula employing three former NFL head coaches on his staff.

The 49ers continued to pursue Adam Gase as offensive coordinator after bypassing him for their head coaching position, a source told Matt Maiocco of CSNBayArea.com. They were not successful, however, as Gase landed with the Bears earlier tonight. More from around the NFL..

We rounded up one set of coaching updates and rumors this morning, but several more have trickled in since then, so we’re due for another recap. Here’s the latest:

Teams considering waiting for Seahawks defensive coordinator Dan Quinn to become available are wary about the possibility that, despite what they’re saying, the Dolphins could hire Quinn to replace Joe Philbin, given the presence of Mike Tannenbaum, says Jason La Canfora of CBSSports.com (Twitter links). Prior to joining the Dolphins’ front office in an official capacity, Tannenbaum was Quinn’s agent, and according to La Canfora, that connection concerned the Jets to some degree.

However, a source tells La Canfora that there’s no chance Miami will hire Quinn if he’s available next month — if another team wants to wait on him, that club should have a shot at him (Twitter link). That team isn’t likely to be the 49ers though, according to Jason Cole of Bleacher Report, who tweets that San Francisco hasn’t talked about Quinn in several days. All signs are pointing to Adam Gase for the 49ers, per Cole.

Let’s check in on a few more coaching-related items….

Two days after after coaching his final game for the Broncos, and one day after formally parting ways with the team, John Fox has an interview lined up with another club, according to Chris Mortensen of ESPN.com, who reports that the veteran coach will meet with the Bears. While Mortensen cautions that Fox isn’t a lock for the Chicago opening, he appears to be a strong candidate, and Ian Rapoport of NFL.com tweets that it’s the job Fox wants.

Per Mortensen, the Bears have been impressed with candidates Todd Bowles, Dan Quinn, Adam Gase, and Teryl Austin, but Bowles is considered a favorite for the Falcons, while the 49ers are reportedly making a push for Gase, and Quinn has a handful of suitors.

With six head coaching positions still available around the NFL, we could see plenty of movement this week, with multiple teams making hires. Here are the latest updates on those vacancies:

According to our head coaching search tracker, there are eight candidates involved in the Falcons‘ hunt for Mike Smith‘s replacement, and if no new names are added to that list, the team’s first round of interviews should conclude tomorrow after a meeting with Todd Bowles. So it makes sense that Ian Rapoport of NFL.com suggests today (via Twitter) that Atlanta intends to bring in its finalists for a second round of interviews. According to Rapoport, Rex Ryan will be among those finalists, though it’s not clear yet who will join him.

Here are a few more items from around the league related to coaches and front offices: