The Cowboys have no interest in Fred Jackson at this time, sources tell David Moore of The Dallas Morning News. For now, they plan on going into season with a committee of Joseph Randle, Darren McFadden, and Lance Dunbar, but they haven’t closed the door on adding a tailback either. Jackson, of course, is on the open market after getting cut by the Bills on Monday.

Here’s a quick look at the AFC..

The Toronto Argonauts added suspending Jaguars wide receiver Justin Blackmon to their “confidential” negotiation list earlier this month, according to Sportsnet’s Arash Madani. This does not mean Blackmon is ticketed for the Argos, but it does mean that they will hold the talented athlete’s rights should he ever decide to attempt a comeback up north.

Under the CFL’s “Ricky Williams rule,” any player suspended by another professional football league is ineligible to play in the CFL until that discipline is rescinded. Even if the former No. 5 overall pick decided to take his talents to Canada, he’d still have to get his situation squared away with the NFL. There’s also the matter of the Jaguars still holding his rights, though the team does not expect him to play football again.

“I have not heard anything and I guess I harbor a little bit of hope but realistically I think when you’re away from the game for two-and-a-half years what you were once is not what you probably will be,” GM Dave Caldwell said earlier this month. “Your skills do erode and especially if you’re not staying in tip-top shape and you’re not in football shape. … I don’t know [what] to expect, but I would say common sense would probably be if you haven’t played football in two-and-a-half years apparently that’s not a priority for you.”

Blackmon was suspended indefinitely in 2013 for repeated violations of the NFL’s substance abuse policy, and would have to apply for reinstatement and go through a lengthy vetting process before having the opportunity to get the greenlight from the NFL. Blackmon has been arrested on drug charges since being suspended, though he has completed a voluntary rehab program.

Despite their pessimism about Blackmon’s NFL future, the Jaguars will continue to keep the 25-year-old on the reserve/suspended list in an effort to recoup some of his signing bonus. Blackmon’s service-time clock remains on hold during his suspension, so if he were to ever return to the Jaguars, he’d still be under contract with the team for multiple seasons.

Patriots quarterback Tom Brady was believed to be “open” to serving a one-game suspension for his role in the DeflateGate matter, according to Ian Rapoport of NFL.com. It was a possibility heading into settlement talks in court Monday, but talks never got that far.

Settlement talks between Brady and the NFL broke down Monday when Judge Richard M. Berman decided the two parties were too far apart and there was no point to continuing. Brady maintains his position that he will not accept the findings of the Wells Report and he is unwilling to accept responsibility for his alleged role in the deflation of footballs. The NFL, meanwhile, has said that it will only slash Brady’s suspension if he’s willing to accept responsibility.

Previous reports have indicated that the NFL would be willing to cut Brady’s suspension to two games if he were to admit guilt. However, Gary Myers of the New York Daily News (on Twitter) hears that the NFL has indicated that it would only take the suspension down from four games to three games. The NFL has yet to make a formal settlement offer to Brady’s camp.

Earlier today, the Bills parted ways with running back Fred Jackson. The news was devastating to many Bills fans but also to Jackson himself who would have “done anything” to retire with the Bills, according to a source to spoke with Mike Florio of PFT. Bills GM Doug Whaley acknowledged today that finances played a role in Jackson’s exit from Buffalo, but Florio hears that the veteran was never even given a chance to make things work with the team. Here’s more on the Bills..

The Raiders waived wide receiver Kenbrell Thompkins, according to Mike Florio of Pro Football Talk (on Twitter). The move will go on tomorrow’s transactions, meaning that he could be claimed on Wednesday at 3pm CT.

Thompkins, 26, stuck with the Patriots in 2013 after being signed as an undrafted free agent, impressing at times during his rookie campaign. He caught 32 passes for 466 yards and four touchdowns in eight starts last season, but wasn’t a major part of New England’s passing attack in early 2014, and was cut just a few weeks into the season. The Raiders then acted quickly to claim him. In 12 games for Oakland, Thompkins caught 15 passes for 209 yards. 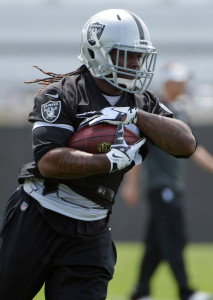 The Raiders will cut running back Trent Richardson, Chris Mortensen of ESPN.com tweets. Richardson, 25, was said to have been on Oakland’s roster bubble this offseason.

Richardson was selected third overall in the 2012 draft by the Browns, but lasted just over a year in Cleveland, having been dealt to the Colts for a first-round pick early in the 2013 campaign. Richardson was underwhelming, to say the least, during his time in Indianapolis, recording 977 yards and six touchdowns on 316 rushing attempts across two seasons, while adding 55 receptions for 494 yards and a TD in 29 games (20 starts). During his time wearing blue and white, the Alabama product averaged just 3.1 yards per carry.

Richardson’s time in Indianapolis came to an unceremonious end when the Colts waived him after hitting him with a two-game suspension for conduct detrimental to the team at the end of the 2014 season. Less than a week after he was let go, the Raiders swooped in and signed him. Now, the former No. 3 overall pick will be looking to join the fourth team of his short career.

Latavius Murray and Roy Helu are the Raiders top two backs and T-Rich was expected to serve as the No. 3 back on the depth chart. However, today’s news confirms that Michael Dyer, who hasn’t been setting the world on fire either, has leapfrogged him.

The Patriots have waived five players, as Mike Reiss of ESPN.com tweets. That group includes linebacker Dekoda Watson, though there are no major surprises in the bunch.

Watson‘s deal with the Pats called for him to earn a $745K base salary on a one-year deal. Watson has spent time with the Bucs, Jaguars, and Cowboys over the course of his career and played in 70 games.