FRIDAY, 4:12pm: The Packers have officially re-signed Perry, the team announced today in a press release. The team also signed offensive lineman Vince Kowalski, according to the release. Kowalski spent training camp and most of the preseason with Green Bay in 2015.

THURSDAY, 6:25pm: The Packers have agreed to a one-year deal with outside linebacker Nick Perry, two NFL sources tell Tom Silverstein of the Journal-Sentinel (on Twitter). The deal is worth $5MM (link).

Green Bay declined Perry’s fifth-year option last year but will keep him in the fold at a lesser rate for 2016. 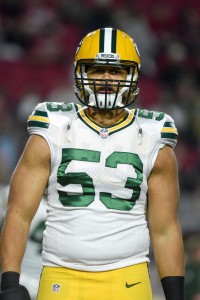 A fifth-year outside linebacker, Perry’s started one game last season while serving as a backup to Julius Peppers and Mike Neal at those respective edge slots in Green Bay.

Rating as Pro Football Focus’ No. 58 linebacker from last season, Perry could be in line for more work in 2016, depending on what the Packers do with Neal.

Also a free agent after starting 15 games for the Packers last season, Neal remains unsigned as an unrestricted free agent. The build-from-within style the Packers mostly use under Ted Thompson suggests Perry, the team’s first-round pick in 2012, would be the player pegged to ascend in Neal’s place in the event Green Bay allows its second-round selection from 2010 walk.

Neal rated as PFF’s No. 95 edge presence out of 110 players who qualified for a full-time assessment.

Perry started a career-high five games as a rookie and has recorded at least two sacks in each of his four campaigns — and at least three in each of the past three seasons in a mostly off-the-bench role — currently sitting on 12.5 career sacks.

Today’s minor signings, cuts, and other moves as teams begin trimming their rosters from 90 players to 75. We will update this post as necessary throughout the course of the day. Some teams have announced major roster cuts, but for the teams that may be waiting until closer to Tuesday to release some of their transactions, here are a few roster moves.

(Some teams may announce a full set of moves later on, and these players may reappear on those lists.)