Former Chiefs and Browns wide receiver Dwayne Bowe has signed a one-day contract with Kansas City and retired from the NFL, the club announced today. 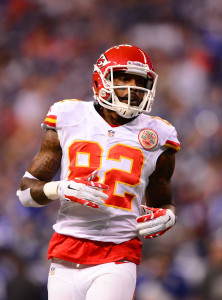 “Retirement” can be used loosely in Bowe’s case: he hasn’t played since the 2015 season and NFL clubs weren’t exactly beating down his door to sign him. But the former first-round pick did experience a good deal of success with the Chiefs, topping 1,000 receiving yards three times, leading the NFL in receiving touchdowns (15) in 2010, and making the Pro Bowl that same year. Bowe, now 34, earned those accomplishments with likes of Damon Huard, Tyler Thigpen, and Matt Cassel at quarterback.

After being cut by Kansas City in 2015, Bowe inked a two-year deal with the Browns that contained $9MM in guarantees. That contract turned out to be one of the more apparent free agent blunders in recent memory, as Bowe didn’t record a catch with Cleveland until Week 9 of the 2016 season. He finished the year with only five receptions on 13 targets, and was released the following spring.

PFR extends its best wishes to Bowe and his family as he enters retirement. 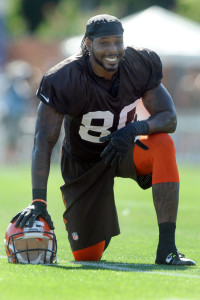 With Josh McCown bothered by a painful rib injury, second-year quarterback Johnny Manziel got the nod for the Browns on Thursday night. The returns weren’t great, with Manziel struggling in the second half, completing less than 50% of his passes as the Browns fell 31-10 to the division-rival Bengals.

Still, there were some positive signs for the former 22nd overall pick, who threw for 128 yards and a touchdown in the first half. Was it enough for the Browns to give him another start? Head coach Mike Pettine wasn’t ready to commit to that following the game, as Pat McManamon of ESPN.com writes.

“When we get in and get back from this time off, we will assess what pool of players are available and go ahead and make those decisions from there,” Pettine said. “This will be a good time to step away and reassess where we are moving forward.”

As the Browns figure out who their starting quarterback will be the next time they take the field, let’s check in on some other items from out of the NFL’s North divisions….

Browns wideout Dwayne Bowe signed for $9MM guaranteed during the offseason and was expected to upgrade a receiving corps in desperate need of help. That didn’t happen through the first three weeks of the season, though, as the former Pro Bowler went without a catch in the opener and then missed the next two games because of a strained hamstring. Nevertheless, the ninth-year man entered Sunday’s game against San Diego brimming with confidence.

Bowe got back on the field in Week 4, but he once again failed to catch a pass. Quarterback Josh McCown, who completed passes to eight different teammates, targeted Bowe just once. The Browns lost, 30-27.

Here’s more on the Browns and a few of their counterparts from around the NFL:

With Randy Bullock looking shaky, the Texans will audition a number of kickers this week, according to Aaron Wilson of the Houston Chronicle. Houston will take a look at Nick Novak, Connor Barth, Kai Forbath, Chris Boswell, and Giorgio Tavecchio as potential replacements, though it’s not a lock that they’ll sign one of those players.

Back in March, the Browns signed wide receiver Dwayne Bowe to a two-year deal worth $9MM guaranteed. What might not be guaranteed, according to one person in the know, is his roster spot for 2015. On the Browns’ radio network earlier tonight, color commentator Solomon Wilcots said that he spoke to coaches who indicated that Bowe needs to deliver tonight in order to make roster (via 92.3 The Fan’s Anthony Lima on Twitter).

Bowe, 31 in a few weeks, missed nearly three weeks of training camp with a sore hamstring and it seems as though the coaches are less than thrilled with what they’ve seen out of him since his return. Still, one has to wonder if Bowe is actually on the roster bubble or if talk of him being a roster casualty is more of a motivational technique for the veteran wide receiver. It would be shocking to see the Browns release Bowe and pay him millions without ever taking the field in a game and, besides, the Browns already coughed up a lot of dough to release Phil Taylor from his deal.

The veteran was part of the underachieving and record-setting group of Chiefs wide receivers that managed to go the entire 2014 season without catching a single touchdown pass. It was the third straight mediocre season for Bowe, who has averaged approximately 59 receptions and 743 yards per year since 2012, on the heels of back-to-back 1,100-yard seasons in 2010 and 2011.

Offset language continues to represent why Marcus Mariota hasn’t come to terms with the Titans on his rookie contract, the last such holdout. Whether or not Mariota would draw two salaries if cut by the Titans — a highly unlikely event considering Jake Locker finished his four-year deal in Tennessee — and signed by another team is slowing down the process, writes John Glennon of the Tennesseean.

No. 1 pick Jameis Winston‘s contract does contain offset language, which determines whether or not a second team’s payment would help the Titans offset the amount owed to 2015’s No. 2 selection in this scenario, but No. 3 choice Dante Fowler Jr.‘s does not, Glennon reports.

In a decade that’s featured far fewer first-round contract issues than the last due to the clearer structure of the new CBA on rookie salaries, the Titans have been the last team to sign their first-rounder in each of the past three seasons, with Chance Warmack and Taylor Lewan coming to terms late in the summer on their respective deals in 2013 and 2014. First-rounder Kendall Wright missed three days of training camp in 2012 after becoming the second-to-last player to sign that year.

Glennon views Mariota’s camp as holding the leverage in these talks, with the Titans coming off a 2-14 season and ready to have the face of their franchise and advertising campaign suit up.

Here are some more items being mentioned across the AFC as Independence Day winds into the afternoon. We’ll continue with a couple of quarterback assessments.