Though their depth chart is lacking behind their top three receivers, the Colts are unlikely to sign a veteran pass-catcher any time soon, according to Stephen Holder of the Indianapolis Star (Twitter link), who adds that it’s “practically certain” general manager Ryan Grigson & Co. are not interested in adding an experienced option. 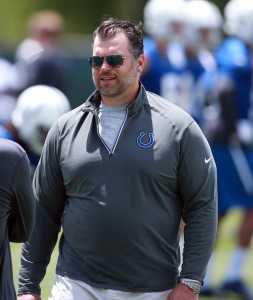 The Colts, of course, were burned by last year’s veteran wide receiver addition, as Andre Johnson posted the worst season of his 13-year career, managing only 41 receptions for just over 500 yards before being released this spring. Depth option Griff Whalen was also cut this offseason, meaning that Indianapolis has little in the way of depth behind T.Y. Hilton and Donte Moncrief, though 2015 first-round pick Phillip Dorsett will be asked to play a lot more than the 212 snaps he saw last season. As Roster Resource shows, Quan Bray, Josh Stangby, and Josh Boyce are next in line behind Indy’s starting trio.

Several veteran wideouts, including Johnson and Anquan Boldin, have found new homes this week, but other options such as Roddy White, Devin Hester, Marques Colston, James Jones, Brian Hartline, and Denarius Moore still remain on the free agent board. Both White and Hester recently reiterated their desire to continue playing in 2016, and Hester said this morning that seven clubs have already reached out to him. One other intriguing name could be Vincent Brown, who was recently released with an injury settlement by the Saints — Brown spent last summer on the Colts roster before being let go during final cutdowns, so he could be a familiar face for Indianapolis, provided he’s healthy.

Brian Tyms, meanwhile, could have been a candidate to scratch out a role on Indy’s roster, but the former Patriots receiver was placed on injured reserve today, reports Aaron Wilson of the Houston Chronicle (Twitter link). To replace Tyms, the Colts signed fellow wide receiver Andre Debose, whom the Raiders waived in early June.

The NFL’s transaction wire has been fairly quiet so far today, but we’ll round up any additional minor moves made tonight in the space below. For now, here are today’s minor transactions from around the league:

Teams around the NFL continue to lock up their 2015 draft picks, and while we’ll dedicate full posts when first- or second-rounders sign their rookie contracts, we’ll pass along mid-to-late-round signings in round-up posts like this one. Here are the latest draft pick signings from around the league, with all salary info via Over The Cap: