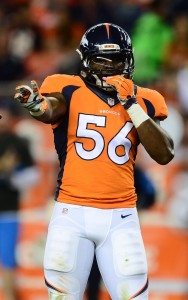 Here are Friday’s minor transactions from around the NFL, as teams get their rosters set for this weekend:

The Jets have officially announced the cuts and other roster moves that will get their squad down to 53 players today. We’ve already heard about several of the moves — quarterbacks Matt Flynn and Josh Johnson, along with veteran defenders Jason Babin and Joe Mays, have been cut, and Stevan Ridley has been moved to the reserve/PUP list.

Here are the rest of the Jets’ moves to reduce their roster to 53, via a team release:

9:12pm: The Jets also added cornerback Greg Henderson, an undrafted free agent out of Colorado, according to ESPN’s Rich Cimini on Twitter.

12:32pm: The Jets have been busy today, announcing several roster moves as their rookie minicamp gets underway. In addition to signing eight undrafted free agents, the team has also cut two players, and will be working out former first-round wide receiver A.J. Jenkins this weekend.

The team has also seen an offseason addition decide to retire — offensive tackle Corey Hilliard, who signed with the Jets in March, has elected to call it a career.

The 30-year-old saw his 2014 season come to an early end when he sustained a Lisfranc foot injury and tore ligaments in that foot during the Lions’ Week 1 game. It was the second time in three years that he missed essentially an entire season, which likely prompted his early retirement, but he had been effective as a swing tackle when he was healthy. In 2013, Hilliard played 459 offensive snaps for Detroit, starting seven games at right tackle for the team.

Here are the rest of the roster moves for the Jets: