Mike Glennon‘s stock is apparently on the rise, but you can cross one quarterback-needy team off of his list. The 49ers are not interested in him, a source tells Matt Maiocco of CSNBayArea.com. 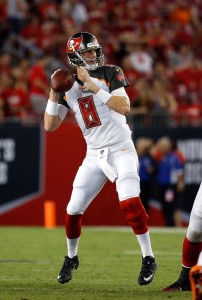 Glennon, 27, has attempted just eleven passes the past two seasons as Jameis Winston’s clipboard holder. Despite the possibility of rust, teams like the Bears are apparently ready to take the bidding to previously unforeseen heights. The Jets were also mentioned as a potential landing spot in January. The 49ers were previously linked to Glennon, but they won’t be among the clubs to push his market.

The former third-rounder started 13 games in 2013, completing 59.4-percent of his passes for 2,608 yards, 19 touchdowns, and nine interceptions.

The Buccaneers reportedly offered Glennon a contract worth $8MM a season, which would have made him the highest-paid backup quarterback in the NFL.

Because of his potential earning power, I have Glennon ranked as the No. 13 free agent on our updated Top 50 Free Agents list. He’s also my No. 1 rated quarterback in terms of ability, but Tyrod Taylor could unseat him from that perch if he’s released in the coming days.